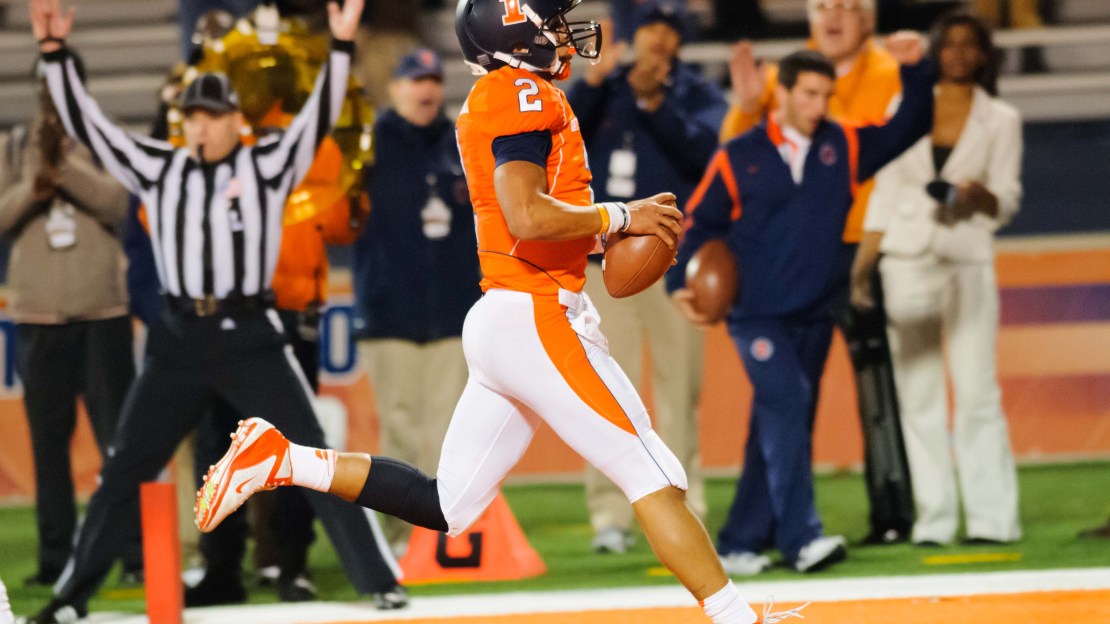 The debut of the Tim Beckman era was, well, disappointing. The Fighting Illini went 2-10 overall and 0-8 in the Big Ten, pushing the school?s league losing skid to 14 games. The arrival of new offensive coordinator Bill Cubit has increased optimism for what was a moribund attack.

Will Illinois make it back to a bowl? Find out in my Best Case/Worst: Illinois.

Best case: Not playing a true road game until Oct. 5 helps Illinois get off to a strong start. Based on talent alone, the Fighting Illini dispatch FCS Southern Illinois in Champaign in the opener. And a re-tooling Cincinnati team also falls when it visits Illinois on Sept. 7. A game vs. Washington in Chicago, however, proves to be to be too much for the Illini, but they?ll rebound the next game vs. a slumping Miami (Ohio) program. October is a big month that features four challenging games, beginning with a trip to Nebraska that is a sure loss. This is the first time the schools have met since the Cornhuskers joined the Big Ten in 2011. There also are visits from Wisconsin and Michigan State in October. Illinois falls to the Badgers but has enough to beat an offensively challenged Spartans team. November determines the bowl hopes of Illinois, which brings a 4-2 mark into the final month. The Fighting Illini has five games-three on the road. Illinois must find a way to win two games. A win won?t come at Penn State to open the month; but the Illini prevail at Indiana the next week. A visit from Ohio State is another loss, meaning Illinois needs to split its last two games to get to 6-6. The Illini win at Purdue to punch their postseason ticket. A season-ending home loss to Northwestern won?t matter. Illinois finishes 6-6 overall and 3-5 in the Big Ten to earn a lower-tier bowl bid and ease Tim Beckman?s pressure-at least for a little bit.

Worst case: Illinois just out talents Southern Illinois in the opener. But then, things get tough. A home loss to Cincinnati and new coach Tommy Tuberville is followed by a loss to Washington in Soldier Field. Illinois wins ugly in Memorial Stadium vs. a struggling Miami (Ohio) program. The Fighting Illini go O-fer October, falling at Nebraska and losing at home to Wisconsin and Michigan State. None of the games are close, as the offense struggles. Wisconsin is 13-3-1 in the last 17 meetings with the Fighting Illini. MSU is 12-1 vs. Illinois in the last 13 meetings. The Illini?s last win vs. the Spartans in Champaign was in 1992. November isn?t much kinder, as Illinois? confidence wavers. There?s a loss at Penn State followed by a numbing defeat at Indiana. That?s five losses in a row; make it six, as Ohio State pummels Illinois in Champaign. The season is circling the drain, as 2013 looks like a repeat of 2012. Illinois loses-again-at Purdue-which has now won 11 of the last 14 meetings for the Cannon. And the season mercifully ends with a home loss to Northwestern, the team Tim Beckman has made a point of beating. NU has now won eight of the last 11 meetings. Illinois finishes 2-10 overall and 0-8 in the Big Ten. It?s the Illini?s second winless Big Ten season in a row, pushing the school conference losing skein to 22 games. The grumbling in Chambama is loud.