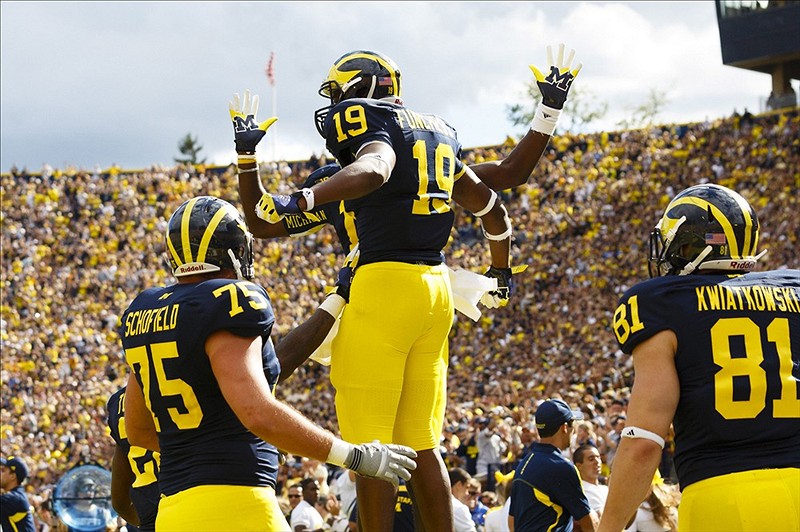 One of the Michigan players I am most intrigued about is sophomore tight end Devin Funchess. The guy is an athletic freak who showed flashes of big things last season as a true freshman and could end up being one of the best in the Big Ten at his position in 2013.

The great Kyle Meinke and Nick Baumgardner of MLive.com debate if Funchess will double his production in 2013. I say he does. In fact, Funchess may be a 40-catch guy.

TIGERS AND BADGERS: Wisconsin A.D. Barry Alvarez said on a recent radio show that he?s close to finalizing a deal for the Badgers to play LSU in two neutral site games.

The Badgers? 2016 slate would be a killer. The first three Big Ten games are at Michigan, at Michigan State and vs. Ohio State. Oh, and there also is a non-conference game at Virginia Tech. Toss in a neutral site game vs. LSU ? woof.

Still, news of this Wisconsin-LSU series is, of course, fabulous. My only beef: I wish the games would be played on the home fields of the teams. Neutral sites stink

BARS OUT FOR SEASON: Depth already is thin for Penn State. Well, the roster got a bit thinner when the school announced that defensive end Brad Bars will miss the season with a ruptured Achilles tendon in his right ankle.

According to Greg Pickel on PennLive.com, either the third-string end at that position, redshirt freshman Evan Schwan, or the back-up at the other end spot, Anthony Zettel, will likely slide over to compete with Olaniyan in summer camp, which begins Aug. 5. This isn?t good. Not one game played-and already one devastating injury.

BIG TEN BOWL UPDATES: It?s official: The Music City and Gator Bowls will be part of the Big Ten bowl rotation beginning in 2014.

The Big Ten and ACC will form a rotation with the Gator Bowl and the Music City Bowl in a six-year contract starting with the 2014 season. Each conference will send a team to each bowl three times in the six-year period. Previously, the ACC was anchored to the Music City Bowl and the Big Ten to the Gator Bowl. The opponent conferences in each bowl have yet to be officially announced.

HUSKERS ADD CINCINNATI: Nebraska?s future non-conference schedules took better shape with the recent announcement of a two-game series with Cincinnati. And a game with Northern Illinois in Soldier Field was nixed. Nothing to get too excited about.

MORE MSU-BCS-TITLE TALK: Hey, it?s Friday. So, let?s have more fun with the notion of Michigan State winning the national title. The great Mike Griffith of MLive.com says these five things must occur for it to happen. No, one of them isn?t the end of the world.

KINNICK STADIUM UPDATES: There is an entirely new north end zone at Iowa?s Kinnick Stadium. And it is fabulous. Check out some photos of the project right here.

The new video board will be monstrous. Can?t wait to see it.

?I feel a lot better going up and down the court,? he told Amelia Rayno of the Minneapolis Star Tribune. ?My jumper is a little better. And I feel like that just affects my overall game like rebounding, pick-and-roll defense, all the things that coach Pitino tries to do.?

The Nittany Lions need to test themselves, as they appear to have a squad worthy of making a push for the NCAA tourney. Here is what Ben Jones of StateCollege.com says.

?As Penn State enters a third year with Chambers at the helm, the Nittany Lions are too deep for a single injury to hijack the season like the loss of Tim Frazier did in 2012-13. What that means as far as results remains to be seen, but if the Nittany Lions make strides in all the right places, this out of conference schedule could be part of the ticket to the big dance.?

Gator & Music City bowls announce partnership to share Big Ten & ACC teams. Delany certainly living up to promise to get B10 teams all over

My take: No doubt, the Big Ten?s national postseason footprint can?t be matched.

My take: The fact a Nebraska writer has to pose the question to readers-in jest or not–is all you need to know.

If I were a kid, my favorite #Huskers player would be RB Ameer Abdullah. Tough. Intelligent. Ferocious competitor. Leader. #doakwalkerlist

Toussaint not included on Doak Walker watch list. Bet there aren't too many 2-year starters or former 1,000-yard rushers left off that list

My take: How can he not be on the list? Amazing.

NU fans need to stop saying Carmody was lazy. Frankly, you have no idea. Reserved personality? Fair. But you don't know how he recruited.

My take: Gotcha. But, the bottom line is this: Bill Carmody didn?t bring enough talent to Evanston. And, he had more than enough time to do it.