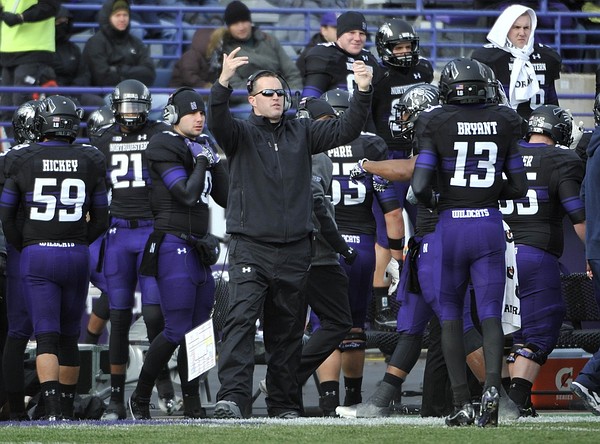 Expectations. Every team deals with them. And, of course, they differ from team to team. Right now, in late July, the possibilities seem endless for each Big Ten team. That?s where I come in with a bucket full of confetti-and one full of cold water. I will begin to take a look at my best-case and worst-case scenarios for each team this season.

I begin the series with a look at media darling Northwestern, which some feel may have its best team in, well, forever. The Wildcats are coming off a 10-3 season capped by the program?s first bowl victory since the 1948 season. And 15 starters (T-third most in the Big Ten) from that squad are back for a NU program that?s looking for its sixth bowl in a row, first Rose Bowl trip since the 1995 season and first Big Ten title since 2000.

Best-case: The Wildcats open 4-0, with wins at Cal; vs. Syracuse; vs. Western Michigan and vs. FCS Maine, setting up a monster prime-time visit from Ohio State on Oct. 5 that could be a preview of the Big Ten title game. Northwestern finds a way to upend the Buckeyes for the first time since 2004, when Randy Walker led NU over OSU in Evanston. But the emotionally-spent Wildcats fall at Wisconsin the next week. (The Cats haven?t won in Madison since 2000.) Still, NU rebounds to close October with wins vs. Minnesota and at Iowa before a big game at Nebraska on Nov. 2. Northwestern won the last time it visited Lincoln in 2011. The Wildcats won?t be as fortunate this time. But Northwestern finishes the season with a flurry, winning back-to-back home games vs. Michigan and Michigan State before punctuating the season with a triumph at Illinois to cap a 10-2 season and earn a spot in the Capital One or Outback Bowl.

Worst-case: Northwestern stumbles out of the block, losing at Cal in the opener as the Wildcats are ambushed by the way-crazy offense of new coach Sonny Dykes. (Ask Tim Beckman what that is like.) NU rights the ship in September by going 3-0, downing Syracuse, Western Michigan and Maine-all in Evanston. But October opens with a tough 1-2 punch, with a visit from Big Ten favorite Ohio State and trip to Wisconsin, which has played in the last three Rose Bowls. Northwestern drops both but rebounds with wins over visiting Minnesota and at Iowa. So, NU takes a 5-3 mark into November. But this is where things come unraveled. First, the Wildcats fall at Nebraska; the hangover will continue with a home loss to Michigan the next time out. The Wildcats have lost seven of the last eight to the Wolverines and haven?t beaten them in Evanston since that wild game in 2000. Alas, NU saves some face by winning its last two: vs. Michigan State and at Illinois, finishing 7-5 and playing in a middling bowl.