Mailbag: Why conference games so early? 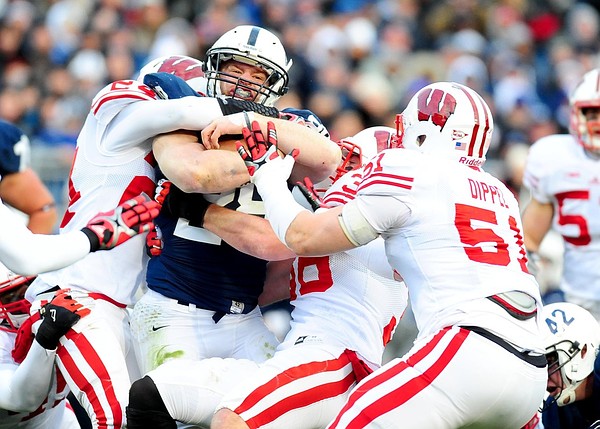 I can?t think of anything better to do on a hot July day than to drink a tall, cool Arnold Palmer and wade through my deep mail bag and answer your questions. And there is a lot to talk about even though none of the footballs or basketballs have been inflated. So, let?s get started.

Is replay something that will be used to determine ejections in the Big Ten for football? Something like that should have a safeguard, because if you remove certain defensive players, it changes the defense completely and sometimes plays happen fast. – Jonathan

Yes, replay will look at all penalties called that result in a player being ejected for targeting a defenseless player. But, when I was at the Big Ten official?s clinic recently, I got the feeling reversals of this call will be rare. My take on all of this: get ready for LOTS of ejections. Where is all of this headed? I have no earthly idea.

I am sorry but this rule stinks, it is stupid and it is leading a sport that I love in a direction that is going to do more harm than good. The Big 10 has now officially become the ?Big Sissy? conference of the College Football World. – Floridafrenchie

First, know this: The new penalty for targeting a defenseless player is college football-wide; not just Big Ten specific. Safety is the buzz word, like it or not. And that?s the reason behind this new penalty for targeting. It will be interesting to see how the first few weeks of the season go. Will there be myriad ejections? How quickly will players and coaches make adjustments? I think this tweaked rule is going to have a huge impact on the game. I certainly don?t envy the officials who have to make the calls on the field when action is fast and furious. Here is the article I wrote about the subject coming out of the recent Big Ten official?s clinic.

Where was Mike Doss on your list of top defensive players in the 2000s? He was a three-time All-American and national champion. – Chris

Good one. Doss was a special player. I still recall watching him in the BCS title game after the 2002 season vs. Miami (Fla.). Guy was the heart of some very good Buckeye defenses in the early part of the decade. I received plenty of similar emails from passionate fans who felt I omitted a player who should have been on my offensive or defensive team of the 2000s. Like these:

LaMarr Woodley? Alan Branch? Leon Hall? All Michigan stars who should have been included. – Scott

Give me Iowa?s Nate Kaeding over Ohio State?s Mike Nugent any day when it comes to Big Ten kicker of the 2000s. – Hawkfan

I'll take Antwaan Randle El at quarterback on my Team of the 2000s. While at Indiana, Randle El became the first player in NCAA Division I history to pass for 40 career touchdowns and score 40 career rushing touchdowns.  Not that it matters for this discussion, but he also played varsity basketball and baseball at IU. Smith's last season may have been better but Randle El had a better career. – John Murphy

Here is my offensive team.

Only one Big Ten program and coach seems to get mentioned multiple times by SEC coaches and even at the 2013 SEC media day. Should Ohio State fans be proud that the Buckeyes are getting singled out by SEC coaches (like Florida?s Will Muschamp, South Carolina?s Steve Spurrier and Alabama?s Nick Saban)? Does the rest of the Big Ten need to catch the Buckeyes in terms of ?juice?? – Thomas

No doubt, it?s a compliment. I think most in the SEC would admit that Ohio State is the biggest threat to the league?s reign of dominance that has seen it win the last seven national titles. The Buckeyes are coming off a 12-0 season and have all sorts of recruiting momentum. Plus, I think there?s a healthy fear of Urban Meyer, who knows how to win it all and compete at the highest level based on his days at Florida. As for other Big Teams ? yes, they all are chasing Ohio State. And, that?s a good thing, because it will make the rest of the conference better trying to keep pace with fast-rising Buckeyes.

Why conference games so early? The ACC and SEC already do that, and I really don't like it. It feels rushed, anticlimactic … it's too soon. There is no buildup of excitement for the meat of the season. Maybe it's just because I've grown up with the "old" arrangement, but I like having the non-conference slate first. – Tom A.

You have good points. But I think the move to earlier conference games is all about spreading ?quality? games throughout the entire schedule. It?s about having attractive TV for each week. Often times, the first few weeks of the Big Ten schedule are filled with unappealing matchups that do little to generate fan or TV viewing interest. With conference games beginning earlier, the September slate suddenly has more appeal. And, a more appealing schedule often means more TV money. Get my drift?

My son is a college athlete in the Pac-12. Why do I view it as my responsibility to keep him out of jail and not his coach? Why are people lumping in Urban Meyer with Aaron Hernandez and not the Patriots coach, or his high school coach or maybe even his parents? Please tell me it's not because the words "Urban Meyer" and "Ohio State" move copy during the slow sports months of June and July. Please tell me it's not because Urban Meyer is an easy target. – Trent

I think it all begins at home, when it comes to teaching behavior, etc. But, along the way, Hernandez seemingly was enabled by many people–including Meyer. I think that's the point people are making. Maybe if Hernandez had faced dire consequences at some point for his poor choices, he would have changed behavior. Alas, it didn't happen. He was allowed to act as he wanted by many people because he was a good football player. Period. It?s that simple. In the end, Hernandez is responsible for his own actions. But, people around him while growing up seemingly did little to help him by ?laying down the law.? His is an extreme case. Still, Hernandez?s ego grew and he felt entitled and untouchable.