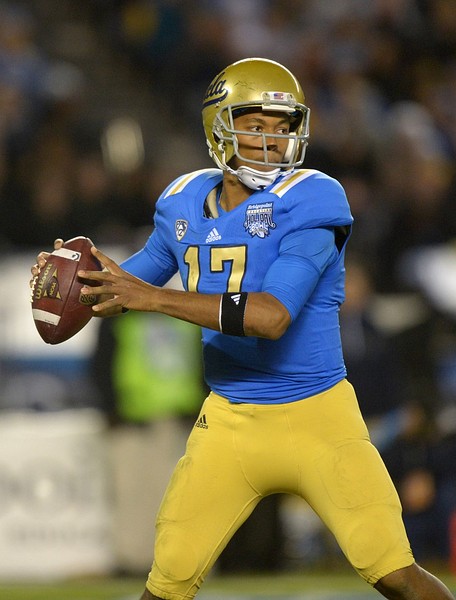 It?s important to know your opponent-especially your opponent?s quarterback. You know how it goes: A team typically will go only as far as its quarterback is able to take it. Well, here?s my ranking of the top 10 quarterbacks that Big Ten teams will face in the non-conference this season.

1. Brett Hundley, UCLA (at Nebraska, Sept. 14)
Nebraska got an up-close look at him last year when he was a redshirt freshman; and it wasn?t pretty for the Huskers. Hundley threw for 305 yards and four scores and ran for 53 yards in leading the Bruins to a 36-30 victory in Pasadena that saw UCLA total a stupefying 653 yards of offense. The 6-3, 223-pound sophomore is an athletic signal-caller who flourished in 2012, totaling over 4,000 yards of offense and leading the Bruins to nine victories, a Pac-12 South division title and a win over USC. He hit 66 percent of his passes for 3,745 yards with 29 touchdowns and 11 picks. Will Nebraska?s overhauled front seven be ready this time?

2. David Fales, San Jose State (at Minnesota, Sept. 21)
He burst onto the season last season en route to leading the nation with a 72.5 percent completion percentage. Fales threw for 4,193 yards and 33 touchdowns, finishing with the third-highest passer rating in the country and leading the Spartans to their first double-digit victory season in over 20 years. Now a senior, the 6-3, 220-pound Fales-who began his career at Nevada before matriculating to a JC, then Wyoming and finally to SJSU–is creating a stir as a legit NFL prospect. The Gophers? defense will need to get pressure on Fales.

3. Jordan Lynch, Northern Illinois (at Iowa, Aug. 31; at Purdue, Sept. 28)
Yes, he flopped in the Orange Bowl, a 31-10 loss to Florida State. But Lynch, a 6-0, 216-pound senior, still enjoyed a strong 2012 and is a legit Heisman contender this season. A dual-threat signal-caller who threw for over 3,138 yards and 25 touchdowns and rushed for over 1,815 yards and 19 touchdowns, Lynch guided Northern Illinois to 12 wins and a MAC title in 2012. He also broke four NCAA records, two MAC marks and 14 school standards in his first season as a starter. Interestingly, Minnesota coach Jerry Kill signed Lynch when he was coach of the Huskies.

4. Taylor Kelly, Arizona State (vs. Wisconsin, Sept. 14)
During his debut as a starter, Kelly wowed by completing 67 percent of his passes for 3,040 yards with 29 TD tosses and only nine picks. Kelly also added 516 yards rushing and accounted for 30 touchdowns in pacing the Sun Devils to an 8-5 record. Built along the lines Drew Brees (6-1/203), Kelly tied for first in the Pac-12 with 49 passes of over 20 yards in 2012. No doubt, Kelly will pose issues for a rebuilt Wisconsin secondary when the Badgers travel to Tempe.

5. Brett Smith, Wyoming (at Nebraska, Aug. 31)
Last season was largely forgettable for Wyoming-except for the performance of Smith. The 6-3, 205-pound junior is coming off a big 2012 in which he hit 62 percent of his passes for 2,837 yards and tossed 27 touchdowns compared with only six picks. Smith also ran for 248 yards and six scores. After just 23 career games, Smith already is among the most prolific quarterbacks in school history. He ranks fifth all-time at Wyoming in total offense with 6,417 yards, and tossed 27 scores as a sophomore, second in school single-season history, and ranks fourth in career TD passes with 47. If Dave Christensen?s staff can put some talent around him, Wyoming could be dangerous to a suspect Husker defense.

6. Blake Bortles, UCF (at Penn State, Sept. 14)
He turned heads as a sophomore last season, starting all 14 games and finishing with 3,059 yards passing, 25 touchdowns, seven interceptions, a 62.9 completion percentage and a 144.5 passer rating. He also rushed for 285 yards and eight touchdowns. The 6-4, 227-pound Bortles is a strong-armed passer who has shown an ability to make all of the throws.

7. James Franklin, Missouri (at Indiana, Sept. 21)
His 2012 season was largely ruined because of injury. But Franklin has shown in the past to be an effective dual-threat weapon when healthy. Now, the 6-2, 230-pound senior is looking for a big sendoff. In 2011 when healthy, Franklin threw for 2,865 yards and 21 TDs while running for 981 yards and a team-best 15 scores.  His 36 total TDs in 2011 accounted for was the third-most in Mizzou single-season history. No doubt, he will pose myriad issues for an Indiana defense that is a work-in-progress.

8. Keith Price, Washington (vs. Illinois in Chicago, Sept. 14)
Yes, he had his struggles last season. But Price spent much of 2012 running for his life behind a line that had four of five starters dealing with injury. Still, Price threw 18 touchdowns with 11 interceptions. The senior enters 2013 as Washington?s career leader in completion percentage (63.1). He needs one touchdown pass to tie Cody Pickett?s school career standard. Want more? Price?s career passing efficiency mark of 138.9 is the best ever at Washington. Illinois needs to find a way to contain Price.

9. Taysom Hill, BYU (at Wisconsin, Nov. 9)
He showed flashes as a redshirt freshman last season, playing in six games and starting two before suffering a knee injury. Hill completed 42-of-71 passes for 425 yards and four touchdowns, rushing 55 times for 336 yards and four scores. The best days are yet to come for the 6-2, 218-pound Hill, who committed to Stanford coming out of high school before going on a Mormon mission. Hill could be a special player and one of the nation?s biggest surprises.

10. Keenan Reynolds, Navy (at Indiana, Sept. 7)
The sophomore assumed command early last season and impressed. No, Reynolds won?t make anyone forget Dan Marino, but he knows how to run this offense and can throw the deep ball well enough to keep defenses honest and maintain room for the potent ground game. Reynolds is uber quick and nice fit for the Midshipmen attack. The Hoosiers need to be disciplined when playing him. In a 31-30 win over the Hoosiers last season, Reynolds hit 8-of-13 passes for 96 yards and a TD and ran 17 times for 66 yards and a score.