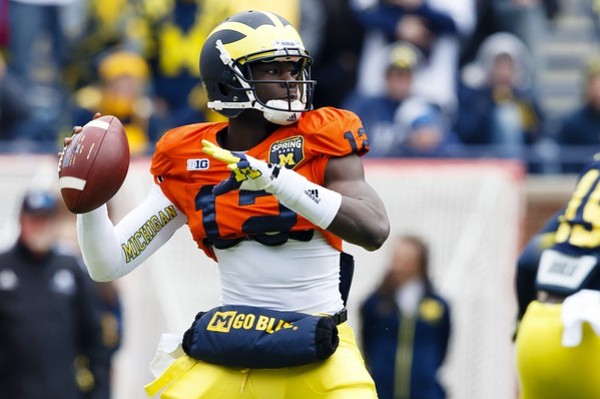 Typically, a team will go only as far as its quarterback takes it. Well, listen up, Nebraska fans: Sam McKewon of Omaha.com has ranked the Huskers? quarterback opponents. This is a fun exercise that you may want to do with your favorite team, as it may give you a good idea on how many victories to expect.

Lots of great analysis about it here.

That visit from UCLA and QB Brett Hundley is huge. That?s all I?m gonna say about that.

YOUR MICHIGAN STARTERS: The season is still over a month away, but here is one scribe?s projected starters-in slide show fashion–for Michigan. Personally, I can?t wait to see the young receivers like Jehu Chesson and Amara Darboh.

MORE WOLVERINES: Many anticipate a big season for Michigan quarterback Devin Gardner. And, he took a step toward improvement by scoring mostly high marks at the Manning Passing Academy.

"Gardner is 6-4, he's 210 pounds, he's got a buggy whip for an arm, he's highly athletic," NFL Network?s Mike Mayock told NFL AM . "He's raw as can be, but trust me — he's a redshirt junior, and this kid's got some ability. I'm really anxious to watch him develop this year."

FOOTBALL IN IRELAND: Turns out Ireland wanted to play host to an NFL game. But, instead, it will get the Penn State-UCF game in 2014.

Ireland's prominent sporting website thescore.ie admits that they want to see the NFL played in the Emerald Isle but a college football game with Penn State is "more than a consolation."

TALKING HAWKEYES: The ?On Iowa? podcast with Marc Morehouse and Scott Dochterman returns after a three-week hiatus with a breakdown of Iowa?s six football opponents for the 2012 football season. Good stuff, as usual, from two of the best in the business.

HERNANDEZ UPDATE: Oh, and in case you were wondering: Iowa A.D. Gary Barta says there are no issues concerning G.A. D.J. Hernandez coaching with the program.

But I have to wonder: Would any school have hired D.J. Hernandez if Aaron had been arrested before the hiring process? I can?t imagine any school would want any connection to one of the most notorious cases in sports history. But, perhaps I am wrong.

PREVIEWING MSU-MICHIGAN: Graham Couch of the Lansing State Journal has been taking a spin through Michigan State?s schedule game-by-game. He?s up to game No. 9: Michigan.

Can the Spartans make it five of six vs. the Wolverines? MSU won?t have a chance unless it can score at least three touchdowns.

"It was totally his idea," Gophers basketball spokesman Matt Slieter told TwinCities.com. "I love it, too. It's another way for fans to hear from the head coach. I don't know how often he'll blog, but he'll blog a lot more during the offseason."

Minnesota A.D. Norwood Teague also has made some waves by thinking big. Teague, now in his second year on the job, has a plan where he hopes to raise $190?million for Gophers facilities, one that would make the school?s athletic facilities go from among the worst in the Big Ten to the best.

I knew I was gonna like this guy. He thinks big.

APPLING'S VALUE: Tom Izzo recently told SI that he thinks that Keith Appling is a much, much better point guard.

He?s gonna have to be if the Spartan are going to be as good as many people think they can be. Diamond Leung of MLive.com points out that Appling led the team in scoring last season, averaging 13.4 points to go along with 3.3 assists and 3.4 rebounds. After the season, Izzo said Appling asked for an evaluation of his NBA draft stock. Appling focused on improving his shot in the offseason before his junior year and improved his 3-point shooting percentage to 32 percent after slumping at 25 percent one year earlier. He needs to continue to shoot better. Stay tuned.

My take: This is great news for a Nittany Lions hoop program that has a chance to surprise next season.

Nebraska's OC, Tim Beck, picks @speed_kills_NU as a Twitter handle. That's a man putting his tweets where his offense is. #huskers

My take: This, of course, is perfect.

UM LB Jake Ryan could miss up to half the season after ACL tear in March and is on the Lombardi Award watch list. But not the Butkus Award.

My take: Feel free to scratch your head. Ah, the beauty of watch lists.