Monday's links: Did you know this wild Urban stat? 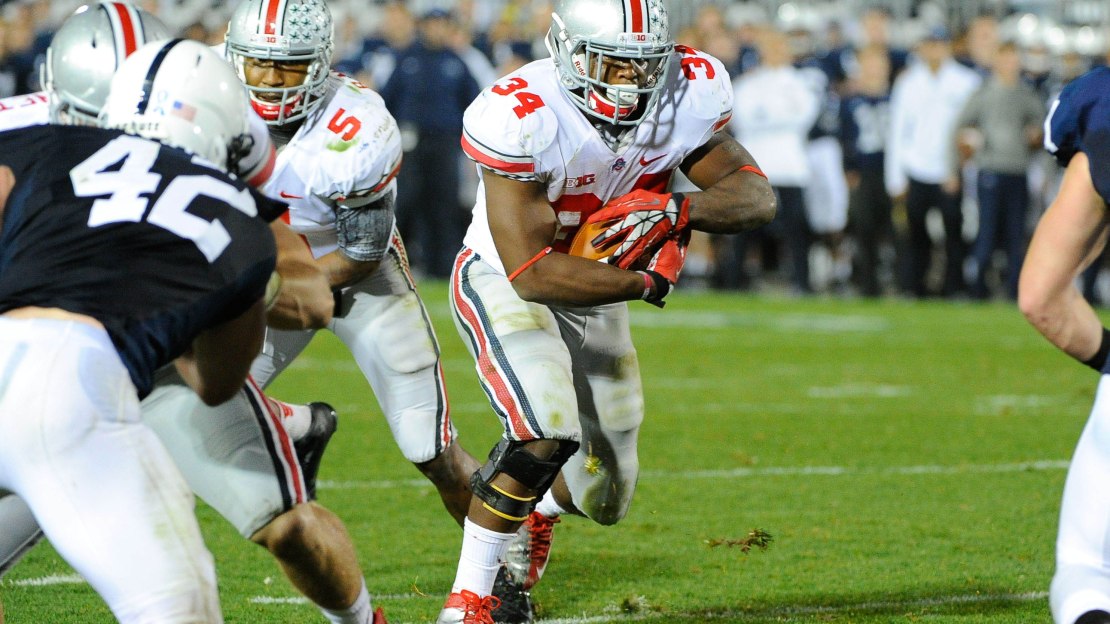 Wow and amaze your friends with this factoid: Urban Meyer never has had a running back rush for 1,000 yards in a season in his 11 years as a head coach.

Carlos Hyde is going to try to end that dubious skein this year. Braxton Miller hit the grand mark last season, but he?s a quarterback.

?When we had (Tim) Tebow, and now Braxton, they are such unique talents when it comes to running the ball, but that?s not what we want to rely on,? Meyer told Tim May of the Columbus Dispatch. ?I need to have Carlos go for well over 1,000 yards this year. That would help in recruiting, in proving our point.

RANKING NONCON SLATES: Not long ago, I ranked the Big Ten non-conference schedules. The great Matty Hayes of Sporting News takes his stab at it right here.

In fact, Hayes thinks Big Ten non-conference schedules just happen to be the most difficult in the nation. Thank you.

Check out this breakdown:

And with FCS schools soon vanishing from schedules, Big Ten non-con schedules figure to become even more difficult in the future. I can?t wait.

LACK OF BIG PLAYS ON D: Iowa dipped to a 15-year low in sacks and tackles for loss last season. Where are all of the playmakers on defense?

Marc Morehouse of the Cedar Rapids Gazette notes that pass rush is a question for the Hawkeyes? defense. Last season, Iowa finished last in the Big Ten with 13 sacks and 53 tackles for loss. Nationally, that ranked 115th and 108th, respectively. And those numbers also just happened to be lows for the Kirk Ferentz era. Ferentz?s first team in 1999, which went 1-10, had only 20 sacks and 59 tackles for loss. So, who could be mayhem makers? Morehouse points to DT Carl Davis; DE Drew Ott; De Dominic Alvis; DE Faith Ekakitie; DE Nate Meier. My money is on Davis, a monstrous presence on the interior who looks primed for a break out.

ANALYZING QB TRANSFERS: Illinois Nation is still agog over the transfer of Wes Lunt from Oklahoma State. Matt Daniels of the Champaign News-Gazette looks at 10 quarterbacks who have transferred-with varying results. Will Lunt be the next Cam Newton ? or the next Tate Forcier?

MEET TYLER FERGUSON: Audrey Snyder of PennLive.com went to Bakersfield, Calif., to learn all she could about JC quarterback Tyler Ferguson. Check out the video here.

Ferguson has potential. Still, I will be stunned and shocked if he wins the starting job over wunderkind Christian Hackenberg.

FINDING NU'S TRAP GAME: Interesting debate here on Inside Northwestern on what is the Wildcats? biggest trap game in 2013.

Is it vs. Michigan State? Or, Iowa? Hmmmm. Yes, the Hawkeyes are down, but NU must play in Iowa City. That?s never an easy proposition. So, if the Wildcats lose to Iowa, I don?t think it will be a shock. Conversely, Northwestern plays Michigan State in Evanston. This is a game the Wildcats will be favored to win-and must win-if they want to dream big. Making the game even more dicey for NU is the fact the week before it will play host to Michigan, which could soften up the Wildcats.

Brown looked to have an especially bright future after earning defensive MVP honors last year on the scout team and excelling in the spring game. Still, there are some good young LBs on the roster, including Jared Afalava, David Santos and Michael Rose. Zaire Anderson and Trevor Roach are promising juniors.

BULLOUGH IN THE BACKFIELD: We got a glimpse of Riley Bullough at running back in the spring. And, Michigan State coach Mark Dantonio says we will see ?a lot? of him there in the fall.

Vets Nick Hill, Jeremy Langford, Nick Tompkins are in the mix along with incoming freshmen Gerald Holmes, R.J. Shelton, Delton Williams. In the end, I still think someone from that group will emerge over Bullough.

MCCABE READY TO SHINE: Is Zach McCabe Iowa?s next Eric May?

Rick Brown of HawkCentral.com says so. And, I agree. McCabe is a nice blend of intangibles. He also is a good shooter for a Hawkeyes squad that?s primed to be a sleeper next season. Here, read what Brown has to say. It?s spot-on:

?(McCabe?s value is) measured well beyond his averages of 21.8 minutes, 5.2 points and 3.7 rebounds a game. It was measured in intangibles and hustle plays. The spark that started the fire, if you will.?

My take: This is outstanding news for a player who is looking to dominate next season.

Iowa's Aaron White; from under radar to World UnivGames team: "every step I've taken, that's been on my mind. To prove people wrong."

My take: He?s quietly becoming one of the Big Ten?s best players. Love the guy. And you should, too.