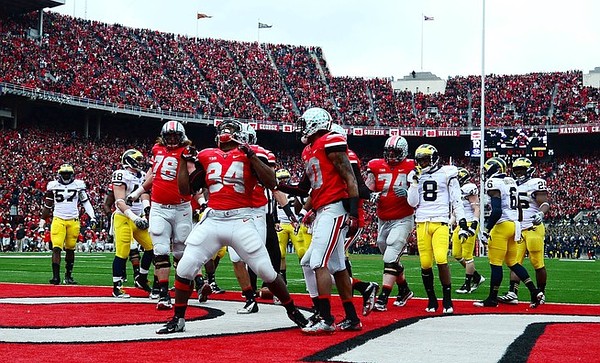 Let?s say time and money are no object to you. You have plenty of each. Plus, you are a huge fan of Big Ten football. Well, you have come to the right place. Let me plan for you this season's ?Ultimate Big Ten Road Trip? that will put you at every week's top game. Pack your bag!

Before we get to each week's top destination, here's a look at where you'll go and who you'll see the most:

If you're surprised by the numbers above, remember, this Ultimate Road Trip is about seeing each week's best game, not the top venues or the highest number of venues.

August 31
Northwestern at Cal. NU hasn?t played Cal since beating the Golden Bears in the Rose Bowl after the 1948 season-which before last season was the Wildcats? only bowl victory. Well, look here: Northwestern opens at Cal. And it will be daunting. The Golden Bears have a new coach in Sonny Dykes, whose high-flying offense is tough to prep for. Ask Illinois? Tim Beckman, whose Illini got shredded by Dykes? Louisiana Tech team, 52-24, last season. On the heels of that junket to Berkeley, the Wildcats come home to play Syracuse-which, like Cal, is breaking in a new coach. No Big Ten team has a tougher 1-2 punch to start the season. Good thing this is a veteran NU squad.

September 7
Notre Dame at Michigan. Notre Dame comes to Michigan for a primetime game. Enjoy this, as it will be the last time the Fighting Irish are in Ann Arbor for the foreseeable future. The teams will meet in 2014 in South Bend. After that, this storied series will be on hold, as the schools have cancelled meetings from 2015-17. There also is an agreed-upon hiatus from 2018-19. Will ND and Michigan ever meet again? The Fighting Irish won last year, 13-6, ending the Wolverines? three-game winning skein in the series. The last four meetings have been decided by a touchdown or less.

September 14
UCLA at Nebraska. No doubt, the visit from a rising UCLA program to Nebraska will be challenging. Last year?s trip to La-La Land was a nightmare for Nebraska. The Huskers allowed 653 yards in a 36-30 loss in the venerable Rose Bowl. It was the first of three horrible performances for the Husker defense (at Ohio State; Big Ten title game). UCLA figures to be a preseason Top 25 team led by QB Brett Hundley. Is Nebraska?s overhauled defense ready for this Bruin offensive juggernaut? Wisconsin at Arizona State is another good game this Saturday.

September 21
Michigan State at Notre Dame. The Fighting Irish are hot coming off an appearance in the BCS title game. After winning two of three in the series from 2007-2010, the Spartans have lost two in a row. And MSU has been outscored 51-16 in the process. The Spartans? last win in the series came in 2010 on a trick play in overtime. Michigan State last won in South Bend in 2007, taking a 31-14 decision. MSU?s chances figure to be enhanced now that Irish QB Everett Golson has been declared academically ineligible.

September 28
Wisconsin at Ohio State. Wisconsin?s trip to Ohio State figures to be a de facto Leaders Division title game. Led by first-year coach Gary Andersen, the Badgers look to have one of the Big Ten?s top defenses-and they will be operating with a new aggressive 3-4 scheme that Ohio State never has seen before. But the Buckeyes have won five of the last six meetings and look to be the favorite to win not just the Leaders Division-but maybe the Big Ten and national championship. Wisconsin hasn?t won in Columbus since 2004, but OSU offensive coordinator Tom Herman said the Badgers played his attack better than any other last year.

October 5
Ohio State at Northwestern. As the overwhelming Big Ten favorite, Ohio State will be the hunted all season, which can be an exhausting proposition. The Buckeyes will get every team?s best shot. And they need to be on guard when they travel for a prime-time game to Northwestern, which has its best team in years. Complicating the task is the fact Ohio State plays Wisconsin the week before heading to Evanston. The Buckeyes have bullied Northwestern for generations. Since losing to NU in consecutive seasons in 1962-63, the Buckeyes have gone 33-2 vs.  the Wildcats. The losses have come in 1971 and 2004, when the Wildcats took a 33-27 decision in Evanston behind Randy Walker.

October 12
Northwestern at Wisconsin. If the Badgers want a shot at going to a third Big Ten championship game in succession, they must go unbeaten at home. And that will mean defeating Northwestern. This is a surging Wildcats program coming off a 10-win season and its first bowl win since the 1948 season. These teams haven?t met since 2010. But, no doubt, Northwestern hasn?t forgotten the 70-23 whipping it suffered at the hands of the Badgers in Madison. But know this: Since Barry Alvarez arrived in Madison in 1990, the Wildcats are 8-9 vs. Wisconsin. And NU is 4-3 vs. the Badgers in the last seven meetings. Michigan at Penn State is another good game this day.

October 19
Minnesota at Northwestern. This Saturday lacks oomph. Still, Minnesota?s trip to Northwestern could be interesting. Yes, this could be a matchup between the first- and last-place teams in the Legends Division. Still, it could be a fun clash. The Golden Gophers are getting better under Jerry Kill, who is in his third season in Minneapolis. And his programs blossomed in the third season in his last two stops: Northern Illinois and Southern Illinois. This could be the Wildcats? best team since the Rose Bowl squad of 1995. Northwestern has had the upper hand on Minnesota of late, winning three in a row and five of the last six. In fact, the Wildcats have taken 10 of the last 15 encounters.

October 26
Penn State at Ohio State. The Nittany Lions have to be dreading the trip to Ohio State to play an OSU team that will be picked to win the Big Ten. The Buckeyes have had Penn State?s number in recent years, too, winning eight of the last 11 meetings. Ohio State leads the all-time series, 15-13, however the ledger is 14-8 when all vacated games are taken into account. Points may be difficult to come by for the Nittany Lions if the quarterback position isn?t solidified by this time in the season.

Nov. 9
Nebraska at Michigan. Going to Michigan will be a significant test for the Cornhuskers. The week before, Nebraska will play host to a strong Northwestern team, making the trip to Ann Arbor even more taxing. The teams have split their two games since the Cornhuskers joined the Big Ten with each team winning on their home field. The quarterback battle between Devin Gardner and Taylor Martinez could be pure gold.

Nov. 16
Michigan at Northwestern. To have a good shot at winning the Legends Division, Northwestern needs to beat Michigan when the Wolverines visit. The Wildcats lost a 38-31 overtime heartbreaker last season in Ann Arbor, as Michigan completed a miraculous 53-yard pass in the waning moments to set up a game-tying 26-yard field goal with two seconds left to force overtime. The Wolverines won it from there. Since beating Michigan back-to-back in 1995-96, Northwestern has gone 2-10 vs. the Wolverines. Michigan State at Nebraska is another intriguing clash on this day.

Nov. 23
Michigan State at Northwestern. Many feel this could be one of Northwestern?s best teams ever. That makes MSU?s trip to Evanston a key Legends Division game. The Spartans lost last year, 23-20, to the Wildcats in East Lansing. Before that, Michigan State had won four in a row vs. NU. It last lost two in a row to Northwestern in 2000-2001. Nebraska at Penn State is another fun game on this day.

Nov. 30
Ohio State at Michigan. This could be a preview of the Big Ten title game. If it is, it will be the only time these rivals will play in the Big Ten championship game, as they will be in the same division beginning in 2014. The Wolverines have been on the short end of this series lately, dropping eight of the last nine. Michigan did win the last time the game was in Ann Arbor in 2011. Before playing the Buckeyes, the Wolverines must avoid a trap game on Nov. 23 at Iowa, where Michigan has lost the last two times it has visited.

Dec. 7
Big Ten title game, Indianapolis. Many feel we could see Michigan and Ohio State meet again for a second week in a row. Not me. I have Nebraska penciled in to win the Legends and to take on Ohio State in Lucas Oil Stadium. Either way, this last meeting between the Legends and Leaders Division champs could be the best Big Ten title game yet.