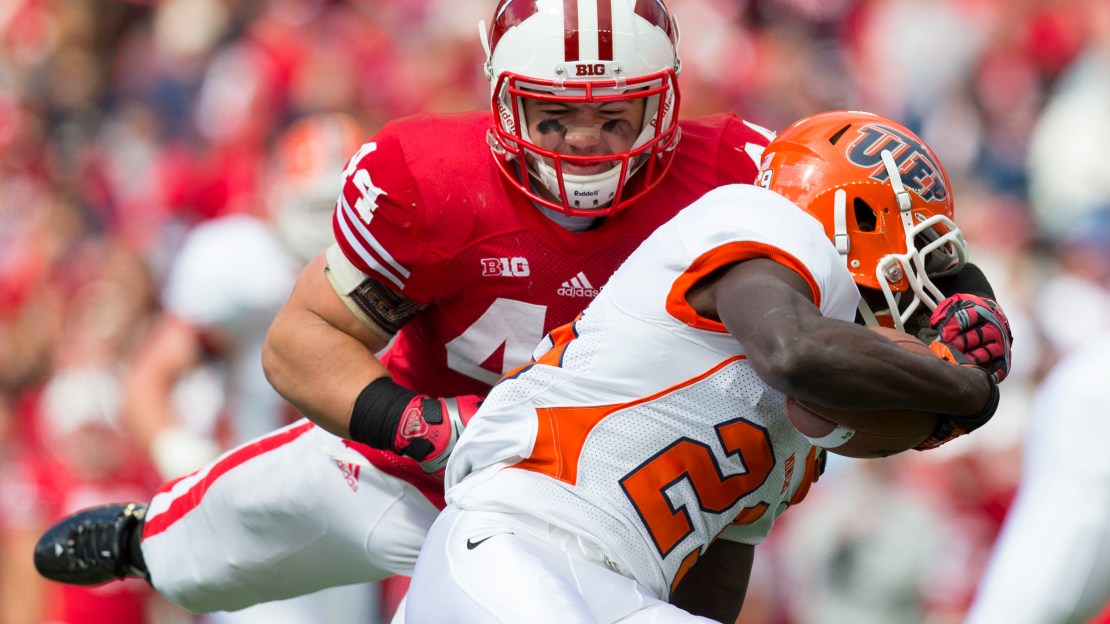 Change was the key word at Wisconsin in the spring, with Bret Bielema off to Arkansas and Gary Andersen arriving from Utah State to assume command. While Andersen will introduce some new wrinkles on offense, the Badger attack will largely continue to be built around a physical running game. But big changes are coming on defense.

A 4-3 scheme is out, replaced by an aggressive 3-4 alignment installed by coordinator Dave Aranda, who followed Andersen from Utah State but not before being wooed by Cal.

Aranda was the architect of an Aggies defense that ranked eighth in the country in scoring defense in 2012, allowing just 15.4 points per game.

In addition to scoring defense, Utah State also ranked among the top 15 nationally in sacks (eighth), pass-efficiency defense (10th), rush defense (12th) and total defense (15th). Aranda?s crew was especially effective in the red zone, allowing foes to score on just 63.6 percent of their trips inside the 20-yard line. That tied them for third in the country in red zone defense. Utah State opponents scored just 13 touchdowns in 44 red zone opportunities (29.5 percent).

Before arriving at Utah State, Aranda spent four years at Hawai`i, the last two as the Warriors' defensive coordinator after coaching the school?s defensive line his first two years. During the 2011 season, Aranda's defense led the Western Athletic Conference and was tied for 15th in the NCAA Football Bowl Subdivision (FBS) in sacks with 35.

I caught up with Aranda to glean some insight on his defense.

Q: How would you describe the style of your defense?
A: We are built to defend the spread. And we are built to be as multiple as we can in terms of pass rushers. The main difference is in a four-man front, those are the guys rushing. In our set up, it could be any of the 11 with the exception of the field corner.

There are two different schools of thought when it comes to attacking. One is, I have all of these pressures, I?m bringing five guys, you could go four under and two deep and bring five people. There is a place for that, but when you bring five guys, you limit the coverages that you play not only in terms of those two coverages. But you are limited in your flexibility, especially when you are playing spread teams. You don?t want to thin out your back end when the ball is coming out quick anyway.

What we try to do, with any of those 10 guys in play as a fourth rusher, we try to make it look like pressure and try to be pinpoint accurate if we can in terms of attacking the blocking scheme or attacking the protection and still play our base coverages. If we can make it look like we are doing a whole bunch of something and not really do anything, that?s what you?d like to do.

Q: Did you ever hesitate in coming to Madison?
A: No. With Coach Andersen and the staff, there are so many things you can enjoy. I really enjoy being around the players. I enjoy times like this when you can put your feet up and watch tape and study people and prepare. You can almost do that to a fault. But the biggest rush for me is when you go through game week and you hit everything you did and the players buy in and are ready to roll and believe they are going to win and have done the necessary studying and have asked the right directions. And as a coach, you have been given the time and resources to succeed, and you go into a game confident and you know you are going to win.

I attribute that to Coach Andersen?s approach. We went into every game with that feeling. And it?s a great feeling. We wanna get that going again. Q: What were some of your thoughts about last year?s Wisconsin game, which the Badgers won 16-14 after Utah State missed a game-winning 37-yard field goal with 11 seconds left?
A: It was a physical outfit. Playing their offense, you had to try to eliminate the two-on-ones. A lot of times when you are a smaller school, you have a hard enough time getting through with the one-on-ones. But you had to really eliminate the two-on-ones up front with some movement and try to get them to ID the wrong people.

Our goal was to get the offense in third-and-long situations where I felt they were at their most vulnerable to be entirely successful. If you are playing third-and-3 and third-and-4, you are playing on their terms. I remember that offense being very similar to us at Utah State, they are grinders, they are tough, they are smart. It was like gym rats going back and forth.

Q: Has there been a coach who has influenced you the most?
A: When I was at Texas Tech and I was later hired at Hawaii by Greg McMackin, who was a big influence on me in being pressure-oriented and getting takeaways. He was trying to change the math on defense and make it so you can play on your terms. He was one.

One of the advantages of coming from a small college was you don?t come with all of the prepaid resources. You have to make phone calls. Like, I called (Vanderbilt defensive coordinator) Bob Shoop. I don?t know him, but I know he did a great job at Vandy. I do that all the time with people. You are less system oriented and have a much greater perspective. You can kind of see above the clouds that way by going out of the system you were raised in and looking at other systems and how they connect and how they don?t.

Q: No other Big Ten team runs a defense like you. Is that an advantage?
A: Yes. On offense and defense. We have tight ends popping out of the sky over here, they are parachuting in on first and second downs. They are all over the place. I think that will make us unique on offense.

On defense, we will be unique with our looks and things. I have a lot respect for the staff that was here before, Chris Ash and Andy Buh and those guys. We just finished our Ohio State study last week and no one played them better last year. There is a great stable of guys returning, but those were some pretty darn good coaches walking out the door. It will be a challenge for us.

Q: Who has stood out thus far?
A: Chris Borland is as advertised. He?s up here studying more than anybody. He?s smart, asks the questions and is very instinctive. He?s a guy we wanna try to build around and blitz. It?s good and bad. When you send him, he?ll make plays. But when you send him, he?s off the ball and can?t use his instincts. You?d like to have 11 Chris Borlands.

On the line, a guy like Ethan Hemer has really shown up. He stood out in the spring. Beau Allen has put in some work after being out in the spring. He is taking hold of that two-gap nose guard spot. It starts with him, and what a guy to start with.

Dezmen Southward is our guy in the back end. He is a good leader. There will be some young guys who will play who are athletic and fast. They just need some leadership and Dez is able to bring that.