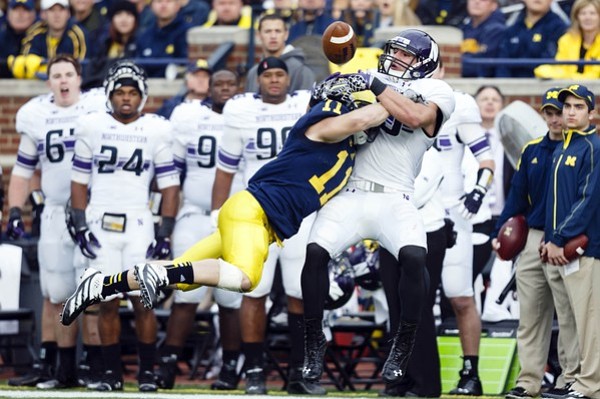 I?m continuing my early week-by-week look at the 2013 Big Ten schedule, and it?s all about Week 12 today. This Saturday's slate of games is heavy at the top, with big-time Legends Division matchups between Michigan-Northwestern and Michigan State-Nebraska. Get all my Week 12 storylines, top matchups and game rankings in this post.

Game of the week: Michigan at Northwestern. To have a good shot at winning the Legends Division, Northwestern needs to beat Michigan when the Wolverines visit. The Wildcats lost a 38-31 overtime heartbreaker last season in Ann Arbor, as Michigan completed a miraculous 53-yard pass in the waning moments to set up a game-tying 26-yard field goal with two seconds left to force overtime. The Wolverines won it from there. Since beating Michigan back-to-back in 1995-96, Northwestern has gone 2-10 vs. the Wolverines.

Quarterback matchup to watch: Michigan?s Devin Gardner and Northwestern?s Kain Colter could hook up for some excitement in what could be a de facto Legends Division title game. Gardner may be the best blend of runner-passer in the Big Ten, but Colter isn?t far behind as his arm has improved. And the Wildcats can insert Trevor Siemian as a change-of-pace signal-caller.

Coordinator matchup to watch: It doesn?t get much better than Nebraska offensive coordinator Tim Beck vs. Michigan State defensive coordinator Pat Narduzzi. In fact, the Cornhusker offense and the Spartan defense figure to be the best in the Big Ten in their respective fields. The clash between the Nebraska receivers and MSU defensive backs should be epic. How will Beck and Narduzzi counter each other?

Upset alert: Purdue may be getting Penn State at just the right time when it visits State College, Pa. The Nittany Lions will play with a shorthanded roster all season, having just 67 scholarship players because of NCAA probation. Penn State?s depth may be comprised by mid-November, perhaps allowing the Boilermakers to capitalize on a depleted roster and notch what could be a key victory on the way to bowl eligibility. The Nittany Lions have dominated this series, winning six in a row and going 12-2 vs. the Boilermakers since joining the Big Ten.

Storylines: Nebraska has won all seven meetings vs. Michigan State-including both meetings as Big Ten foes. ? Ohio State has owned Illinois of late, winning the last five meetings and eight of the last nine. The lone Fighting Illini victory in that stretch was when they stunned No. 1 Ohio State in Columbus in 2007 on the way to the Rose Bowl. The Buckeyes haven?t lost in Champaign since 1991. ? Dominance. There?s no other word that best describes the Wisconsin-Indiana series. The Badgers have won the last eight meetings, and 14 of the last 16. The Hoosiers? lone victories came two years in a row, 2001-02. During this run of dominance, Wisconsin has scored over 50 points on Indiana seven times. No one soon will forget the 2010 game won by the Badgers, 83-20. ? Iowa and Minnesota are off.