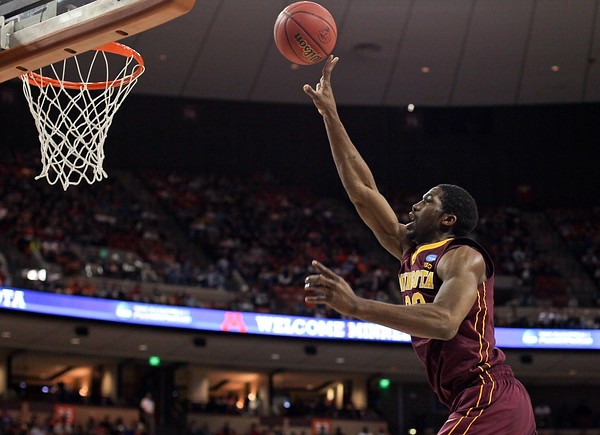 "I like Burke because he's a winner, he's tough, and he can score. He's got some D.J. Augustin in him. He loves to prove people wrong. We like our guards big, but look at guys like Chris Paul and Tony Parker. I think Burke is a solid point guard but I don't see the all-star level."

"He has shown improvement because he's an extremely hard worker. Defensively he's just average. He needs to become a better shooter, especially off the dribble. He's a better athlete than Bullock. If I'm picking late teens or early 20s and he's available, I would take him. His problem is the position he plays at the next level is really hard."

"On the court I think he can contribute, but the off-court stuff has to be cause for concern. I think he makes a roster. He's undersized. Maybe he could make it as a Reggie Evans or Paul Millsap type, but he's not as good as either of those guys."

"Love his makeup. Great worker. On defense he plays like Tony Allen. He took very limited attempts to get that high (three-point) percentage. My question is, has he had his big jump already of improvement? The fact that he's a top five pick is an indictment of this draft."

"He's going to struggle. He has been a mismatch in college because he had the advantage in size and quickness, but that won't be the case in the NBA. He has always been a scorer, but he's too small to be a four, and that's where he played his whole career at Ohio State. He's not athletic or quick enough to create or guard the three, and he's not big enough to play the four. So he's your classic tweener."

"The best running big man in the draft. He's a better face-up player than we were shown in college. He has to get stronger on his post-ups, but he handles the ball well for a guy his size. If he develops a jump shot, that will give him more space to drive. I think he has great upside. When you talk to him, you see he's an elite human being. He really gets it, and physically he's an elite athlete."

* — Illinois' Brandon Paul, a possible NBA selection, was not included in the piece.