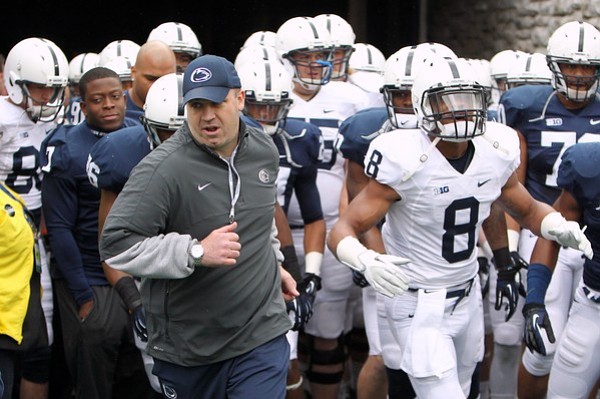 Big doings yesterday in State College, Pa., Penn State coach Bill O?Brien got his deal re-worked. And, I think he?s worth every penny of his revised deal. Yes, it?s good to be O?Brien, who received a $1,000,000 raise, which pumps up his total compensation to $3.28 mil per year. No need for him to hesitate when asked if he wants extra meat on his Subway sandwiches. Ya, O?Brien can afford it.

It?s worth noting that should O'Brien leave Penn State for an NFL job, he would owe the university his current year's base salary times the number of years remaining on the contract.

Here are O'Brien's year-by-year salaries for the remainder of the contract, which start year on July 1.

Looking to prime the pump for the coming season? Then check out USA Today?s countdown of every FBS team. The depth and breadth of previews is astounding.

The arrival of Oklahoma State quarterback Wes Lunt is the best news the Illinois program has gotten since ? well … forever. Click here, Illini fans, to get all the Lunt-to-Illini news your orange-and-blue heart desires. By the way, don?t you wonder why Lunt didn?t just go to Illinois coming out of high school in Rochester, Ill.?

Brady Hoke thinks the SEC isn?t the only elite league. Nope, Hoke says that the Big Ten is awfully good, too.

This is all fine and dandy late-June chatter, but I think it?s time for everyone in the Big Ten to just clam up and win some big football games-and a few national championships. You know what they say: actions speak louder than words.

HuskersOnline is counting down the top 40 Nebraska players for 2013.

The countdown is at No. 35, linebacker Thomas Brown-a redshirt freshman who I think will be a stud. I really like the young Husker LBs, especially Jared Afalava.

The great Mike Hlas of the Cedar Rapids Gazette has a nice podcast here that has a nice interview with Fran McCaffery.

Indiana welcomes some ballyhooed recruits, including the likes of Noah Vonleh, Troy Williams, Stanford Robinson and Luke Fischer. Collin Hartman? He?s not a mega blue-chipper. But don?t tell him he won?t make an impact.

Peter Jok with 35 points tonight in his first PTL game. Kid can shoot.

My take: Gonna be a nice addition.

My take: Not bad.