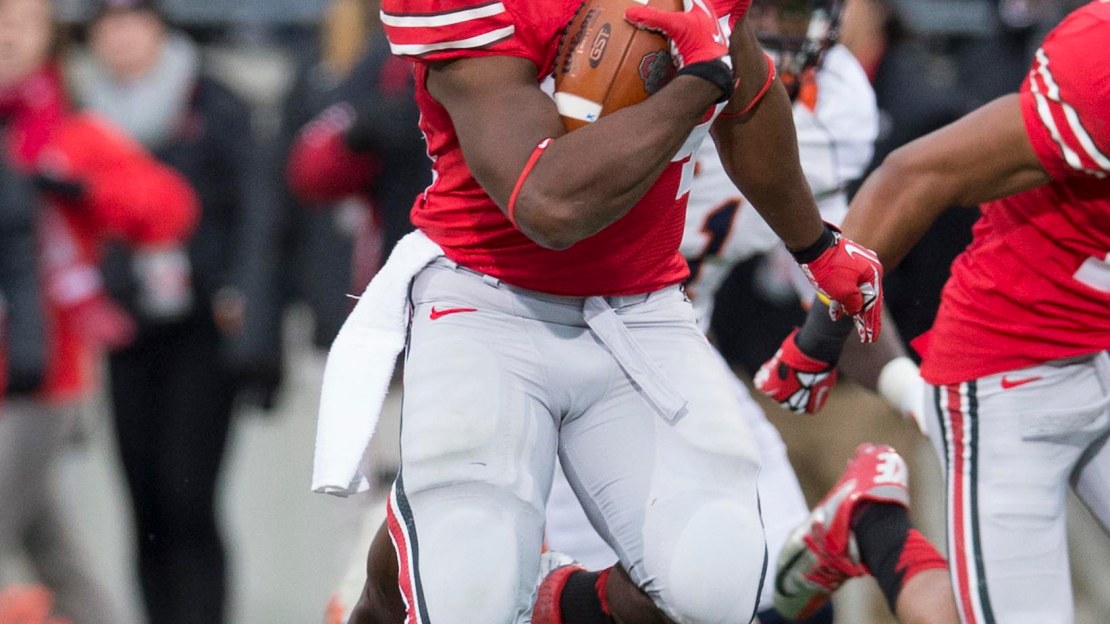 Now comes the tough part for Ohio State: The encore to a 12-0 debut under Urban Meyer. Offensive coordinator Tom Herman knows his attack must continue to evolve if the Buckeyes are going to follow up last year?s wild success and fulfill grand expectations for 2013 that have some predicting OSU to go to the BCS title game.

Herman?s first year was a success. Using personnel not recruited to run the spread, the Buckeyes led the Big Ten in scoring (37.2 ppg) and ranked No. 3 in total offense (423.8 ypg). Credit Herman, a bright mind who one day will be a head coach. Every key component from his prolific 2012 group is back, leading some to think this attack could be even better. I caught up with Herman while he was conducting camps to get his thoughts.

Q: Is the offense where you thought it would be as you enter your second year at Ohio State?
A: That?s a good a question. I don?t know if I ever put any thought into where we would be entering our second year. You have your head down and nose to the grind stone so much that you don?t really come up for air and think ?In June of Year Two, this is where we need to be.? We just keep plugging away. I know it sounds cliché, but you try to get as good as you can as fast as you can. As long as you can put your head down on the pillow at night and know that you are doing all you can to get there, I think you are satisfied.

So, we are at least pleased with the progress. Satisfied isn?t the right word, but we are pleased with the progress. When you take a step back, I would say we are on a very good trajectory. Would we like to be at the pinnacle? Absolutely, but we understand Rome wasn?t built in a day. We are going to accelerate the process as much as we can, but we like the trajectory.

Q: Can you explain this new ?diamond? formation that has been installed as a new wrinkle?
A: It?s kind of an inverted Wishbone. Dana Holgorsen did a good job with it a few years back at Oklahoma State when he had (Brandon) Weeden and (Justin) Blackmon. He was getting into it to get single coverage on Blackmon. He would put three backs in the game, or two backs with a fullback/tight end guy. And Dana would have a two-play check to where if defenses double Blackmon, they were going to run it. And if they didn?t, they were going to throw it to Blackmon. I have been studying it for a couple of years.

It has evolved a little bit to where guys are running a lot more plays out of the formation. It has been fun. It has been fun for our guys because we are pretty deep at tailback. Carlos (Hyde) and Rod Smith, who probably could start a lot of places in this league. And we have two young guys in Bri?onte Dunn and Warren Ball who deserve to see the field a little bit.

But we don?t want to stray too far from what we are. But at the same time, if we have the opportunity to get some of our better players on the field and have a compact four- or five-play package we all feel good we can execute, I think it?s worth the investment.

Q: How often do you think you?ll be in the formation?
A: Like a lot of things that are ?B List? formations, things you don?t major in but get in and out of, I think  early on you will poke and prod at the defense and see how it lines up. If they are doing a good job stopping what you thought you could take advantage of, you just get out of it and live to fight another day. If you are having success, then maybe you stay in it a little more. You?d probably like to break it out at least a few plays a game and then evaluate how the defense is aligning to it and adjusting and see if it merits staying in it.

Q: Did you visit with the 49ers to see how they use Colin Kaepernick?
A: I didn?t go visit but I spoke on the phone to them. Got a lot of their cut-ups and videos. Nowadays, video being digital, it?s hard to hide anything. We had our GAs pull out every time the 49ers ran that formation and charted it run/pass. We took out what looked good or fit what we do.

But the last thing you want to do is ask the five guys up front to have to do much different. If you are putting in a new wrinkle, you want to be able to say to the five guys up front, ?same as.? This is the same as this, or this is the same as that. You dress up the backfield however you wanna dress it up. But you have to keep those five guys up front not overloaded. They have so much to think about with so many different fronts and movements they can see. So, yes, we studied the Niners and pulled from them what we felt might fit us and would work with our formations and schemes and went from there.

Q: Which defense that you faced last year posed the most problems?
A: Absolutely, Wisconsin. Without a doubt. Their defensive coordinator Chris Ash, who I knew from my days at Iowa State and am good friends with ? I felt like I got out coached. He was very simple. He did not call one blitz on first or second down. He called one front and one coverage. Within that front and coverage, he could adjust to any formation or motion we gave him. And he had his kids extremely well coached up on recognition of plays and alignments.

We were trying to run the ball into a nine-man front. I did a poor job in not having confidence in our throw game. You have to throw it over their heads and our guys have to make plays if they are going to commit both safeties to the run the way that they did. Even though we won in overtime (21-14), Chris had his guys more prepared than I did. I learned from it. And it?s better to learn from a win than to learn from a loss, I can tell you that.

Q: Any playmakers at receiver?
A: The old adage is ?you have everyone back.? Well, that can be a good or bad thing. For us, it?s a good thing. It wasn?t for lack of talent that we were unproductive at times at receiver. I think it was myself not doing a great job of keeping the offense somewhat condensed to allow these kids who had played in a drastically different offense the year before to get good at a few specific things. I felt at that spot we were a jack-of-all-trades and master of none.

We made a conscience effort this spring to really condense and limit our throw game, and I think it benefited the receivers and they got better. I think Corey Brown will be your go-to guy, but I don?t know what kind of home run hitter he?ll be. He had a few catch-and-runs last year. He?s not a home-run hitter and probably never will be. He?s the definitely the most cerebral of the group and understands football and the offense and can play all the different spots at receiver knowledgeably and well. We will kind of lean on him.

I think Devin Smith is continuing to improve. He has tons to talent, but the mental part of the game was foreign to him. He got better in the spring. Evan Spencer is a big physical presence and cerebral guy who can play a lot of spots. I don?t think we have a Ted Ginn Jr., Santonio Holmes, the list goes on. But we are getting there and improving. That?s what matters.

Q: Do you have your "Percy Harvin"  guy?
A: Jordan Hall will play that role. He?s a lot quicker than he his fast. He can make some people miss in space. He?s a top-end-high 4.5 guy. He?s not the elite speed level that Percy was. But certainly vision and dependability, quickness in the open field, he has a lot of those same traits. And we have Dontre Wilson and Jalin Marshall, the two freshmen we will be excited to see.