Debate It: 2013 Big Ten Quarterback of the Year? 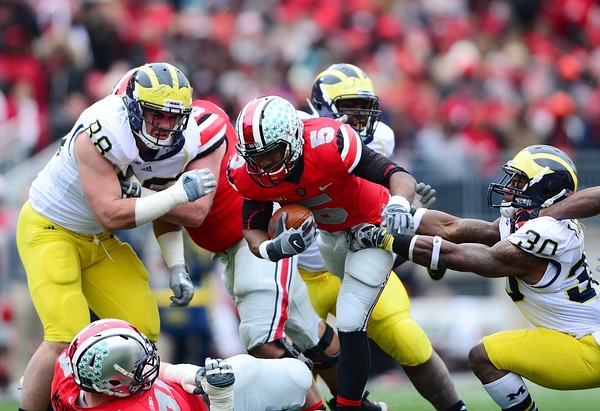 In its short two-year existence, the Griese-Brees Quarterback of the Year has been very kind to its recipients. The inaugural winner, Russell Wilson, went on to have an All-Pro NFL rookie season, and last year's winner, Braxton Miller, is a preseason Heisman Trophy favorite. Not bad, huh?

Who will have the good fortune of taking home the hardware this season? Tom Dienhart and Brent Yarina offer their picks in this post.

Tom: Not much of an argument about the top two spots. It?s Ohio State?s Braxton Miller and Nebraska?s Taylor Martinez. They are the Coke and Pepsi of Big Ten quarterbacks. You could make a case for either being the league?s best. In fact, the gap is small. I think Miller?s playmaking as a runner gives him a slight edge. The interesting part of this discussion is which signal-callers are Nos. 3-5? I think Indiana?s Tre Roberson is gonna have a huge year. He was one pace in 2012 for big numbers before breaking a leg early on. And all reports indicate Michigan?s Devin Gardner is gonna blossom-maybe explode. Philip Nelson at Minnesota intrigues me. He could take off after a baptism of fire last year as a true freshman. He?s a nice fit for the offense, too.

[ RELATED: Check out all of our 2013 Big Ten football predictions ]

Brent: Considering Miller was my pick for Graham-George Offensive Player of the Year, it goes without saying the junior is my selection here. Regression is possible, what with the bevy of weapons Ohio State boasts – there's only one football, after all – plus Urban Meyer and company could decide to limit their star's carries. Whatever the situation, Miller will produce and produce in a big way. After Miller, and not far behind him, are Taylor Martinez and Devin Gardner. Any three of these guys has the ability and talent around him to be the Big Ten's best. The Big Ten may lack proven depth at quarterback, but it's looking really strong at the top.