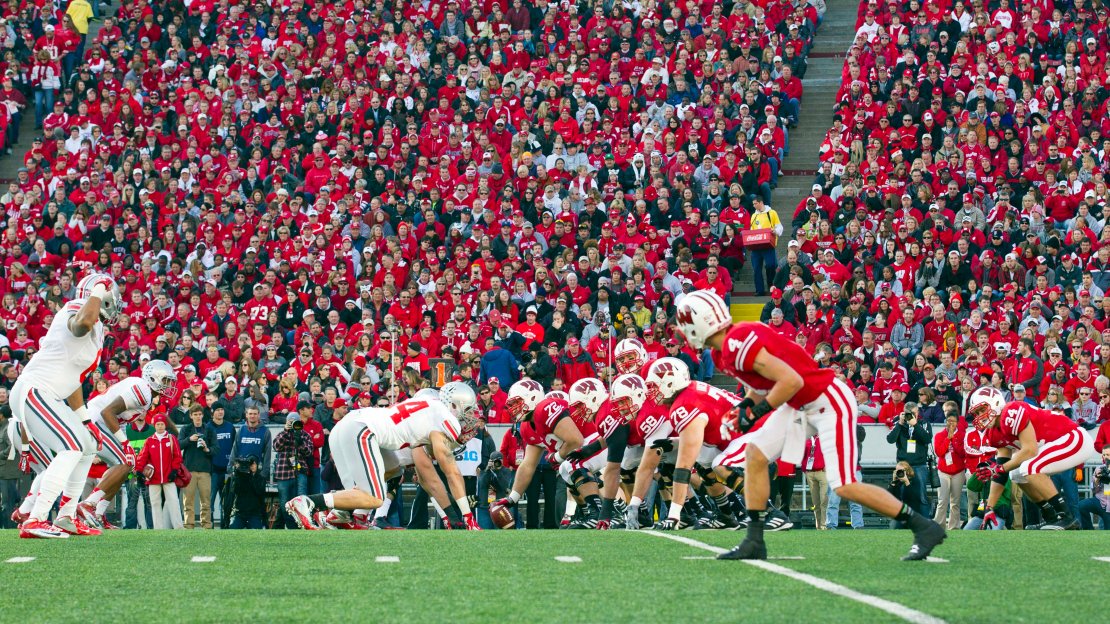 If Big Ten football fans have a wedding to attend this fall, they probably hope it lands on Week 5 – aka Saturday, Sept. 28. Unless, maybe, you're an Ohio State or Wisconsin fan. The Badgers trip to the Buckeyes highlights an abbreviated four-game slate, half of which includes nonconference games (Northern Illinois at Purdue; Miami (OH) at Illinois). Get all the storylines, matchups and my rankings of Week 5 games in this post.

Game of the week: Wisconsin?s trip to Ohio State figures to be a de facto Leaders Division title game. Led by first-year coach Gary Andersen, the Badgers look to have one of the Big Ten?s top defenses-and they will be operating with a new aggressive 3-4 scheme that Ohio State never has seen before. But the Buckeyes have won five of the last six meetings and look to be the prohibitive favorite to win not just the Leaders Division-but maybe the Big Ten and national championship. Wisconsin hasn?t won in Columbus since 2004.

Quarterback matchup to watch: Without a doubt, it will be Ohio State?s Braxton Miller vs. whoever wins the Wisconsin job-probably sophomore Joel Stave, the primary starter last season. Miller is the reigning Silver Football Award winner and the Big Ten?s top Heisman contender. Stave showed flashes last season after taking over the starting job in the fourth game until a broken collarbone suffered Oct. 27 vs. Michigan State derailed his season.

Coordinator matchup to watch: The Ohio State offense and Wisconsin defense should be among the best in the Big Ten among their respective units. So, it will be interesting to watch Ohio State offensive coordinator Tom Herman match Xs and Os with Wisconsin defensive coordinator Dave Aranda. Herman is one of the sport?s bright young minds, a 38-year-old Wunderkind and future head coach. Aranda was plucked by Gary Andersen from Utah State, where Aranda was a hot commodity who was wanted by many coaches. Interestingly, both Herman and Aranda graduated from California Lutheran. Herman got out in 1997; Aranda in 1999.

Upset alert: Minnesota figures to be favored at home vs. Iowa. But the Hawkeyes easily could win. Iowa is coming off its worst season since 2000. The Hawkeyes won last year?s meeting in Iowa City, 31-13, and have won four of last six in the battle for Floyd of Rosedale. But the Golden Gophers won the two previous meetings (both in Minnesota) prior to 2012 and have won three of the last four in Minneapolis.

Storylines: This is the ?Week of the Bye,? as half of the teams are off! Indiana, Michigan, Michigan State, Nebraska, Penn State and Northwestern all will catch their breath following four non-conference games. So, needless to say, this is a light week with just four games-and two of the games are non-conference tilts with little appeal: Northern Illinois at Purdue and Miami (Ohio) at Illinois. ? Minnesota and Iowa will battle for the iconic Floyd of Rosedale Trophy. These teams may end up fighting to avoid the Legends Division cellar. So, the loser could be in trouble. ? Northern Illinois has a first-year coach, but this still is a strong program that returns star quarterback Jordan Lynch and is coming off an Orange Bowl season. And Purdue fans no doubt recall Northern Illinois strolling into Ross-Ade Stadium and dumping Purdue the last time it visited in 2009. Jerry Kill coached that NIU team. ? Illinois is 2-0 all-time vs. Miami (Ohio), but the schools haven?t played since 1941. MAC teams have had some fairly recent success vs. the Illini, as Ohio (2006) and Western Michigan (2008) have toppled Illinois.