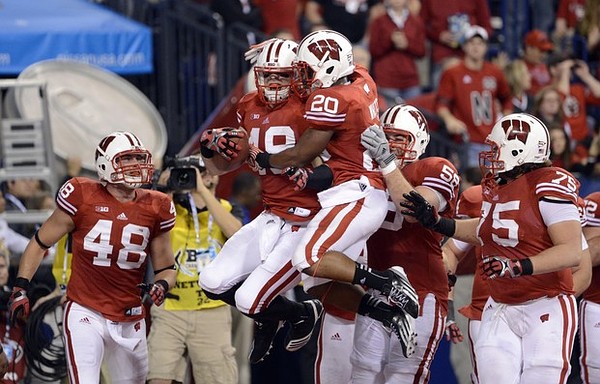 If experience matters, Wisconsin is in good shape for 2013. According to Phil Steele, the Badgers will have the most experienced team in the Big Ten in terms of having the top percentage of returning lettermen.

Bret Bielema knew this day was coming. He mentioned it a few times prior to his shocking departure for Arkansas, pointing toward 2013 as being a potentially big season with a veteran roster. Well, that day has arrived-only Gary Andersen is there to reap the benefits.

Here?s a look from 1-12 at the most experienced teams in the Big Ten. (Returning starters are in parentheses.)

2014 DRAFT, ANYONE? It?s never too early to think 2014 NFL draft. And, it looks like Michigan State linebacker Max Bullough is on the radar.

The guy is the quintessential throwback who will play 10 years in the NFL. Just watch.

GOING ABROAD? So, schools from non-power leagues are thinking of starting bowl games vs. each other in exotic locales like Dubai, Ireland and the Bahamas?

QUITE THE FACILITY: Penn State has some of the best weight room facilities in the Big Ten. Don?t take my word for it. Check out this video tour.

Speaking of Penn State, Bill O?Brien is in the midst of assembling another standout recruiting class despite dealing with NCAA sanctions that limit him to 15 scholarships.

As Ben Jones of StateCollege.com points out, moving forward there is no reason to expect O'Brien's recruiting momentum to slow. Penn State, like any other program, will have victories and failures on the recruiting trail, but the allure of playing for a staff full of NFL experience is likely greater than the chance to play in one of the nation's many "prestigious" bowl games.

GARDNER DETERMINED IN 2013: It sounds like Michigan quarterback Devin Gardner is upset with how 2012 ended.

"The finish we had in the (Outback Bowl loss against South Carolina on Jan. 1) was really beneficial for us even though we lost," Gardner said on a national radio show. "Because you've got a lot of guys that are hungry, almost pissed off, that it ended that way.

Well, it will be tough to win the Legends vs. teams like Nebraska, Michigan State and Northwestern. Should the Wolverines win the Legends banner, Ohio State figures to be waiting in the Big Ten title game. It?s a tough road.

BIG GET FOR HUSKERS: Tim Miles? ability to lure Kenya Hunter from Georgetown to be an assistant underscores Nebraska?s commitment to hoops.

Yes, the Cornhuskers wanna be big-time in hoops. They will move into the best facility in the Big Ten next season and already have the top practice facility. Now, the school has an impressive coaching staff. Next: get some stud players. The Huskers are on the rise. Deal with it, America.

BIG TEN CAN DO IT, AFTER ALL: Fun read here from Dirk Chatelain of the Omaha World-Herald, who recalled a conversation he had with Jim Delany a few years ago in which the Big Ten commish basically dismissed college baseball as not being a fair sport. Well, fair or not, Delany?s league has a team in the College World Series for the first time since 1984. And, hey, if Indiana can make it-as well as schools like Stony Brook and Kent State, which did last season-why can?t other Big Ten teams?

REALIGNMENT REPORT CARD: Remember back in 2010, when conference realignment really started to take off? Well, Andy Staples of SI.com does. And he grades each school?s move. Nebraska? It gets a B+ for its hop from the Big 12 to the Big Ten.

ILLINI CAMP: June is camp month. And, Illinois has been busy. Illini coach Tim Beckman expects to see 2,000 players once all of Illinois? camps are over. It?s all about speeding up the recruiting process.

Hoke's latest history lesson must be on the fact that the Rose Bowl will celebrate its 100th game in Jan Michigan won the 1st, obviously.

My take: How perfect is this?

My take: I don?t think I would have admitted this.

My take: It had no shot of making the Big Dance anyway, right?