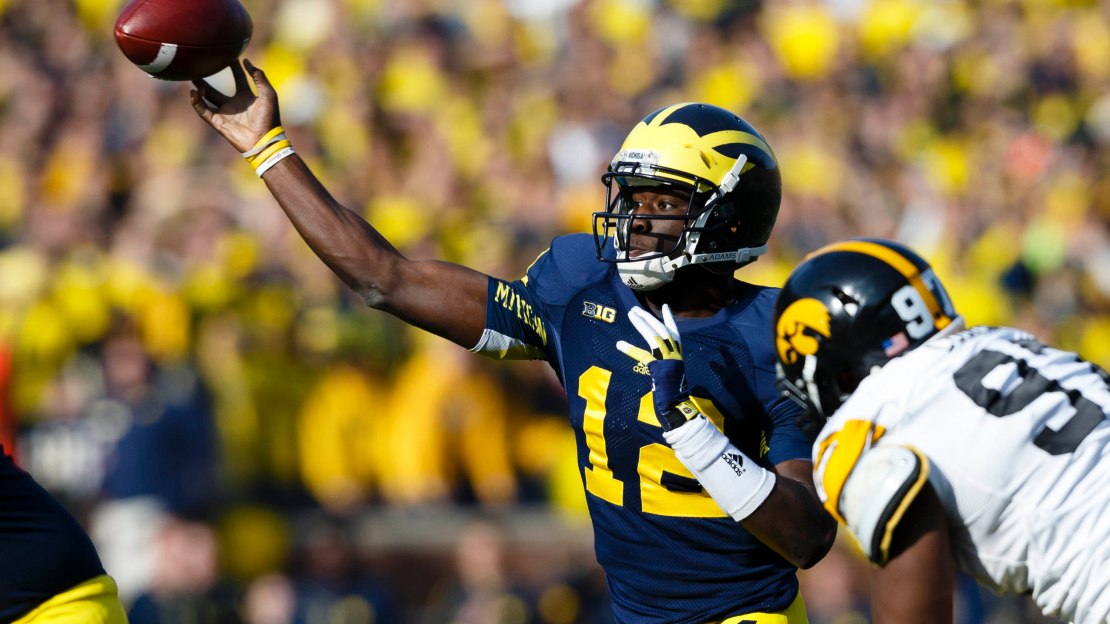 The Michigan offense is set to take the final step in its transformation from a spread-oriented scheme into a pro-style attack.

Coordinator Al Borges knew this day was coming. Heck, he would have preferred to have installed his full playbook the day he arrived in Ann Arbor with Brady Hoke from San Diego State.

But Borges knew quarterback Denard Robinson was a round peg who would have been jammed into a square hole had he done that. So, Borges retained a spread scheme the past two seasons in order to maximize Robinson?s wondrous athletic skills.

With Robinson gone, junior Devin Gardner is set to assume command. Heck, he began last year, when the then-receiver started the final five games after Robinson hurt an elbow at Nebraska.

Gardner showed ample promise, especially as a passer-considering he spent all offseason and the first eight weeks catching passes. The Michigan offense looks primed for a big 2013 as the pro style is fully utilized for the first time since Lloyd Carr?s final season in Ann Arbor in 2007.

I caught up with Borges to get his thoughts on his offense.

Q: Were you pleased with where the offense was coming out of spring ball?
A: Yes, very pleased. We got back to what we want to do. It was fun. And we are starting to get some of the players we wanted to do it with. The kids we had were good and did a good job for two years. We are supplementing our personnel more. It really wasn?t the direction (spread) we wanted to go offensively. It wasn?t what we wanted to do in the future, but it was what we needed to do in the present. That?s just the way it was. But now that we are headed in the direction we wanna go personnel- and scheme-wise, it was a fun spring.

Q: So you finally get to use your full playbook, right?
A: Yes, exactly. Exactly. Originally, our plan was to install our offense and do what we did at San Diego State and Auburn and those places. We have studied some stuff and have some things that will allow us to spread the defense out.

Q: Who does Devin Gardner remind you of?
A: He?s not really like anybody I have had. I?ve had so many prototype drop-back passers. He isn?t like (former Auburn quarterback) Jason Campbell, who was athletic but he really wasn?t a runner. I haven?t had a lot of real runners. He?s different. He?s hard to compare to someone else. He?s more like an RG3 type of guy. He?s a little taller than RG3 but plays a lot like him.

[ RELATED: Who will lead the Big Ten in passing yards? | What about passing TDs? ]

Q: What would you like the run-pass percentage to be?
A: We?d like to be around 50-50. Maybe favor a little more run than pass. The best years we have had as a coordinator we are in that area. You wanna have a 1,000-yard rusher, if it?s possible, or have a couple guys combine to do it. You?d also like a guy to catch 1,000 yards worth of passes. A tight end who can catch upwards of 35 balls. But I don?t really put numbers on it that much. But the biggest thing is maintaining that balance and efficiency. If you can just threaten the defense two ways, the numbers don?t have to be exactly the same. You just have to make the defense play both dimensions and then you have what you want.

Q: Are we getting too excited about incoming freshman Derrick Green, considered by some to be the top prep running back in the nation?
A: I don?t know. We tell them all that once they get here we are starting over. They are all Wolverines now. There are no three- and five-stars or any of that. We are excited about the whole recruiting class. He?s been a guy who has gotten a lot of publicity, and justifiable so because he has done a lot. But they all start at Ground Zero.

Q: Could incoming freshman Shane Morris be the backup quarterback?
A: Oh, yes. He?s capable. It?s gonna be a matter of how quickly he can pick things up. He?s a capable kid. He?s what we want from a physical perspective and skill set. He has a strong arm and is athletic. He does some good stuff. You just have to be careful how much you feed him. You don?t want to have such an extensive menu that it?s paralysis through analysis. As long as he isn?t mentally saturated, I think he has a chance to help.

Q: Roy Roundtree is gone. Who do you like at receiver?
A: Jehu Chesson and Amara Darboh had very good springs. On a daily basis, they demonstrated some big-play ability. Going up to get some high balls or running by some people. Run after catch. It was nice to see them take that next step. You don?t know if they can do it with the lights one. All we have to go on is what you see. I think they?ll do a nice job supplanting the loss of Roy Roundtree. And our two slots, Drew Dileo and Jeremy Jackson, are from a college perspective grizzled veterans. They have played in big games and made some big plays and done some good stuff. Jeremy Gallon is our No. 1 receiver. He has played a lot and been productive, particularly the last part of the season. He was a really, really good player. And maybe one of these freshmen come in and contributes, too. Add in tight ends Devin Funchess and Jake Butt, who we had in the spring, and I think we?ll be pretty good.

Q: Will the interior of offensive line be ok? Three starters are gone.
A: It?s a little concerning but not that much. Jack Miller has been here a while, knows the system and has pushed for that position (center). He?s ready to take that step, I think. Ben Braden, Kyle Kalis and Graham Glasgow, those three inside guys are kinda fighting for those two spots at guard. And Graham is still fighting for that center spot, too. It isn?t like we don?t have good candidates. And the difference now is we have more of them. Before, we were shorthanded. There weren?t enough players you could put in the game and feel good about it. But I think we are much better off.

Q: Since you arrived prior to 2011, what has been the most improved position?
A: I don?t know if improved is the best word. We have transformed. When we came in, we had the smaller receivers. And still do. But we are trying to get to a bigger receiver. On the line, we are trying to get a thicker and taller kid. We aren?t as interested in running 80 plays a game like some other teams. So we don?t care if they are smaller. We want athletic guys who still have some girth. And at tailback, we are trying to find a guy who can carry is 20-25 times a game and be as good in the fourth quarter as he is the first. More of a passer-runner quarterback than the other way. And find tight ends. We just didn?t have a lot when we got here, and that?s a big position in our offense. Transitioning from spread to pro style isn?t just Xs and Os. That?s a small part. The biggest is transforming your body types.