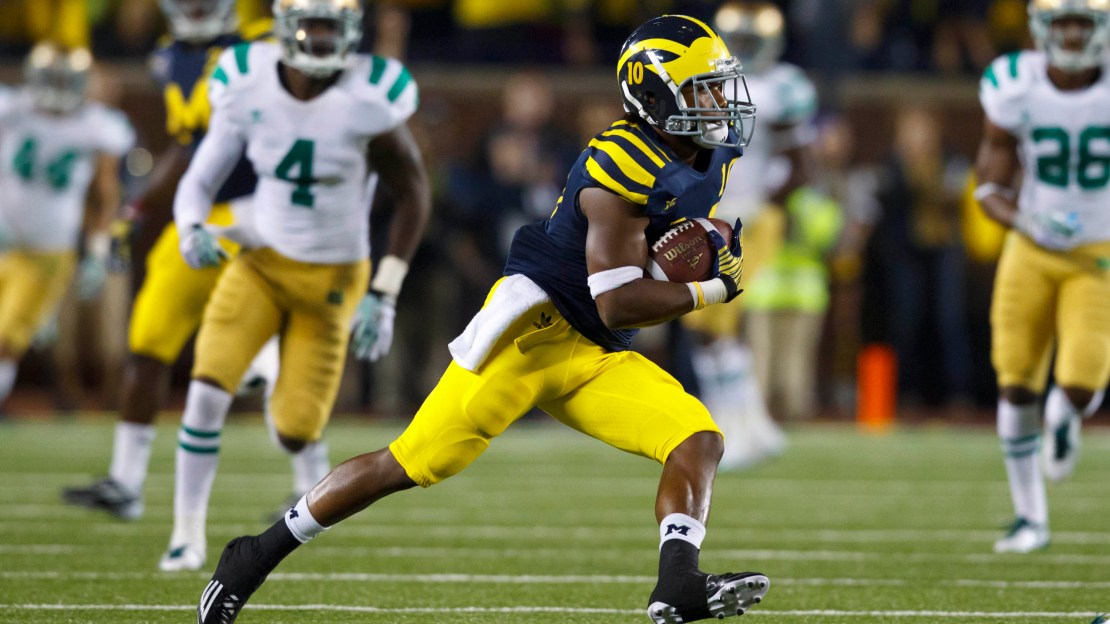 Hey, who isn't looking forward to football season? It's only June, but I'm itching for kickoff and am starting to look ahead to each week of the 2013 season. From Week 1 to Week 12, I'll offer the best each week has to offer and rank every week's games. Up now: Week 2, highlighted by Notre Dame at Michigan.

Game of the week: Notre Dame comes to Michigan for a primetime game. Enjoy this, as it will be the last time the Fighting Irish are in Ann Arbor for the foreseeable future. The teams will meet in 2014 in South Bend. After that, this storied series will be on hold, as the schools have cancelled meetings from 2015-17. There also is an agreed-upon hiatus from 2018-19. Will ND and Michigan ever meet again? The Fighting Irish won last year, 13-6, ending the Wolverines? three-game winning skein in the series. The last four meetings have been decided by a touchdown or less.

Quarterback matchup to watch: Indiana has yet to tab a starter. But the Hoosiers will be in good shape whether it?s Tre Roberson or Cam Coffman under center. Navy has a nice signal-caller in Keenan Reynolds. He took over six games into his true freshman season and impressed. Reynolds has the requisite quickness and speed to excel in this option attack.

Coordinator matchup to watch: Michigan offensive coordinator Al Borges vs. Notre Dame defensive coordinator Bob Diaco. This is about as good as it gets. Borges is a sage, smart offensive mind who finally will be able to unleash all of his pro-style offense with the more conventional Devin Gardner under center. Diaco?s defense was the backbone of the Fighting Irish?s march to the BCS title game last season. Diaco won the 2012 Broyles Award as the nation's top assistant coach, the first Irish assistant ever to capture the award. His defense last season ranked among the top 10 in 12 different categories.

Upset alert: The Spartans need to be careful when South Florida visits East Lansing. Willie Taggart has taken over for Skip Holtz following a disappointing 3-9 season. There is some talent on hand for a program that always has a decent amount of athletic ability.

Storylines: This is a so-so week. All12 schools are in action, but three games are vs. FCS foes: Indiana State at Purdue; Tennessee Tech at Wisconsin; Missouri State at Iowa. Another game is vs. what annually is one of the worst FBS programs: Eastern Michigan at Penn State. ? The only team on the road is Minnesota, which has a bizarre trip to Las Cruces, N.M., to play New Mexico State. ? The other seven games are decent. ? Illinois has played Cincinnati one time, losing at Nippert Stadium, 49-36, in 2009, in a battle between Ron Zook and Brian Kelly. ? This is the second season in a row that Southern Miss will have come to Nebraska, losing 49-20 last year. Southern Miss won in Lincoln in 2004. ? This is the first meeting between South Florida and Michigan State. ? Northwestern won a wild game last year at Syracuse, scoring the game-winning touchdown behind backup QB Trevor Siemian with 44 seconds left to take a 42-41 triumph. The all-time series is tied 5-5. ? Penn State is 3-0 all-time vs. Eastern Michigan, winning in State College in 2011. ? New Mexico State won the only other meeting with Minnesota, winning in Minneapolis, 28-21, in 2011. In that game, Jerry Kill had a seizure on the sidelines in the waning seconds of the game. ? Indiana lost at Navy last season, 31-30. The Midshipmen came to Bloomington in 1985 and 1986, losing both games. ? Ohio State is 3-0 all-time vs. San Diego State. All three games have been in Columbus since 2001-the last in 2005.