Off to Omaha! Indiana advances to first CWS 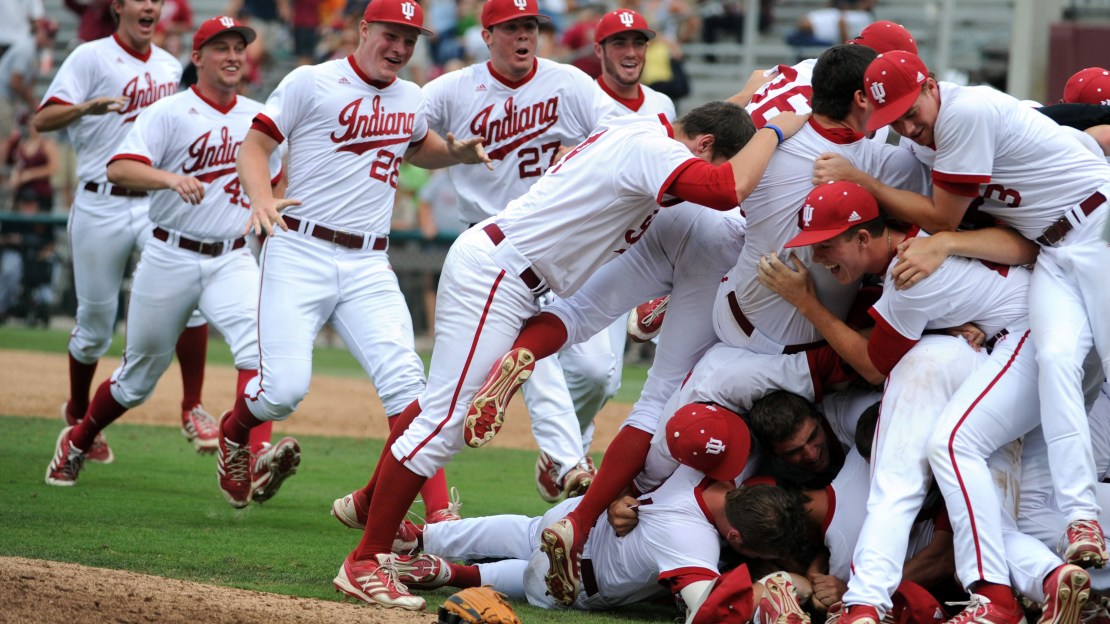 Indiana is making its first trip to the College World Series. And the Hoosiers have broken a long CWS drought for the Big Ten along the way. Sam Travis hit a two-run homer in the bottom of the fifth inning to break open a tie game as Indiana defeated Florida State 11-6 on Sunday in the Tallahassee Super Regional.

Indiana (48-14) is in the NCAA postseason for just the third time and was playing in its first Super Regional. But the Hoosiers played with plenty of poise on the road, sweeping the Seminoles.

?This is certainly uncharted territory for us,? Indiana coach Tracy Smith said. ?We?re thrilled, we?re happy but we feel like we have a lot of work left to do.?

Indiana is the first Big Ten team since Michigan in 1984 to reach the CWS. It?s been 29 years, and Smith remarked that he was a senior in high school.

The Hoosiers have won the Big Ten regular-season title, conference tournament and then claimed their regional. But the fact that Indiana had to go on the road and win a Super Regional in front of a vocal, pro-Florida State crowd was not lost on Smith.

?I don?t think there?s a better preparation for our team going forward,? Smith said. ?That was a tremendous atmosphere. I think it makes the statement that it?s not a fluke. People don?t understand what Northern schools have to go through to get to this point.?

Will Coursen-Carr (5-0) pitched four innings of relief for Indiana, allowing just an earned run in the ninth inning. Coursen-Carr has earned the win in the Big Ten championship game, Bloomington Regional title game and in Sunday?s Super Regional clincher.

Indiana scored four runs in the first inning, the 28th time in 62 games that they have pushed at least one run across in the opening frame. Travis had a sacrifice fly, Scott Donley had an RBI double, Michael Basil had an RBI double and Casey Smith had an RBI single.

For Tracy and Casey Smith, the season has been special. Father and son have enjoyed the ride together, and it continues at the CWS in Omaha, Neb.

The magic ran out for Florida State (47-17), which tied the game in the top of the fifth inning when Coursen-Carr hit Casey Smit with the bases loaded. But Indiana responded with Travis? home run and added a run in the seventh and three more runs in the eighth to put the game away.

A day after Florida State stranded 13 runners on base, the Seminoles left 14 on base Sunday.

?Somebody, somebody pick us up,? Florida State coach Mike Martin said. ?Credit them for making pitches when you needed to make them. It?s just part of the game that makes it interesting every night.?

Kyle Schwarber had a go-ahead two-run single in a four-run seventh inning as Indiana went on to beat Florida State 10-9 on Saturday in the first game of the Tallahassee Super Regional.

Schwarber, who also had a two-run homer in the fourth, put Indiana up 7-6 with his hit in the seventh.

Indiana (47-14) can advance to its first College World Series with a win on Sunday. If the Seminoles (47-16) win, a deciding game will be played Monday.

The Hoosiers? big inning came against relievers Gage Smith (4-2) and Billy Strode, who gave up just three hits in the inning, but the Seminoles committed two throwing errors.