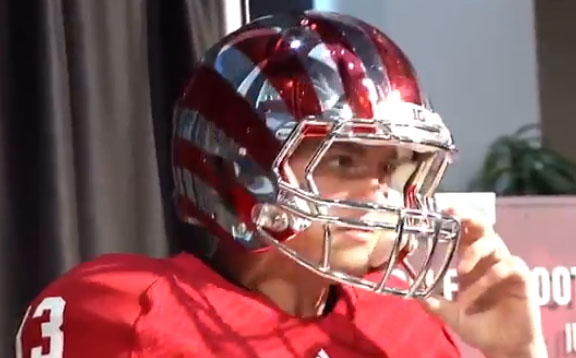 Marc Morehouse of the Cedar Rapids Gazette has a nice look at the alternate uniform craze. As he notes, the zany and garish togs aren?t about fortysomething fans; they are about the kids and recruiting.

I guess that?s why I just don?t get it, seeing as how I?m a fortysomething guy. Would a kid REALLY base a decision on picking a school on uniforms? Really? (Shaking my head.)

That?s good for news coach Gary Andersen, who already saw one assistant (Jay Boulware to Oklahoma) bolt before spring practice. He didn?t need to try to replace another before he coached even one game.

CRUCIAL YEAR FOR IOWA: OK, Iowa fans, it?s time to take a close look at each game on the 2013 schedule. HawkCentral.com has a nice breakdown on each Iowa foe, as the Hawkeyes enter arguably the most critical season of the Kirk Ferentz era.

The program seems to be at a crossroads of sorts coming off a 4-8 season. Iowa is flying under the radar, and this is when the Hawkeyes do some of their best work. Still, it may be difficult for Iowa to reach six victories. To have any shot at it, the Hawkeyes must open 4-0. That makes the key non-conference game the trip to Iowa State. The key Big Ten games: at Minnesota; vs. Northwestern; at Purdue. Iowa needs to win two of those three games if it wants to go bowling.

HAWKEYES PODCAST: Check out this podcast from Marc Morehouse and Scott Dochterman of the Cedar Rapids Gazette. In it, these fine scribes talk about the top 10 games of the Kirk Ferentz era. Some of the games include the 2004 Big Ten-clinching victory vs. Wisconsin, the 2005 Capital One Bowl and the 2010 Orange Bowl, among others.

BREAKOUT WOLVERINE? Who will be Michigan?s breakout player? How about defensive end Frank Clark?

As Kyle Meinke of MLive.com notes, there were 165 players who recorded at least five sacks last year. Nineteen played in the Big Ten. None played at Michigan. Clark will break that drought. It?s about time for Greg Mattison?s defense to generate a good rush. That?s been the one big shorting coming under his stewardship.

GOT TO LIKE THEIR CHANCES: Never before has a four-year player under Michigan State coach Tom Izzo failed to reach a Final Four. Well, Keith Appling and Adreian Payne will be the first if the Spartans fail to reach the Final in Cowboys Stadium in 2014.

You have to like MSU?s chances to reach the Final Four promised land this coming season. The team is loaded and already picked by most to win the Big Ten and ranked among the top five teams in the nation in most every early poll.

MICHIGAN MIXING IT UP: For his next act, Michigan?s Glenn Robinson III will move from off-guard to small forward. The move would push Nik Stauskas to the backcourt.

Mark Snyder of the Detroit Free Press says the Wolverines want Robinson to expand beyond his impressive put-backs and open-court athleticism, which were enough for him to average 11.0 points and 5.4 rebounds per game in 2012-13. The coaching staff wants to see Robinson, one of only two Wolverines to start every game last season, able to execute in set plays. I like the move. And, honestly, is that radical of a switch? I just wonder if Robinson is physical enough to play small forward.

PITINO ON GOPHERS: New Minnesota hoop coach Richard Pitino recently shared his thoughts on the program he?s taking over during a caravan stop.

This could be an interesting team with a strong backcourt led by Austin and Andre Hollins. But interior play could be an issue.

MORE PENN STATE SAGA: The Penn State saga continues, as a federal judge has thrown out a lawsuit vs. the NCAA by Pennsylvania Gov. Tom Corbett. The judge ostensibly said there is no legal basis for the suit, which was aimed at NCAA sanctions related to the Jerry Sandusky scandal. The lawsuit sought to overturn the $60 million fine, four-year bowl ban and other penalties.

Interesting note from a reader who said hotels in Dublin are already filling up in anticipation of the Lions' potential 2014 game vs. UCF.

My take: This is impressive. And wild, too.

Exactly one week after the Paterno family and supporters lawsuit vs. NCAA is filed Gov. Corbett's lawsuit vs. the NCAA gets tossed Thoughts?

My take: This is good to hear.

My take: Let?s have a moment of silence. Thank you.

We haven't come close to an Ohio State/Michigan B1G title game, and we have only one more opportunity, so of course it'll happen this year.

My take: Good odds for it this year. But I still like Nebraska in the Legends.

Ohio State and Alabama football teams made the NCAA honor roll for stellar work in the APR arena. Worlds are colliding.

My take: Putting the student in athlete, right?

Eric Spoelstra was born in Evanston. So that means he's replacing Hardy on Collins' staff, right?

My take: Just thought I?d leave you with this totally meaningless Tweet. You?re welcome. Have a good weekend.