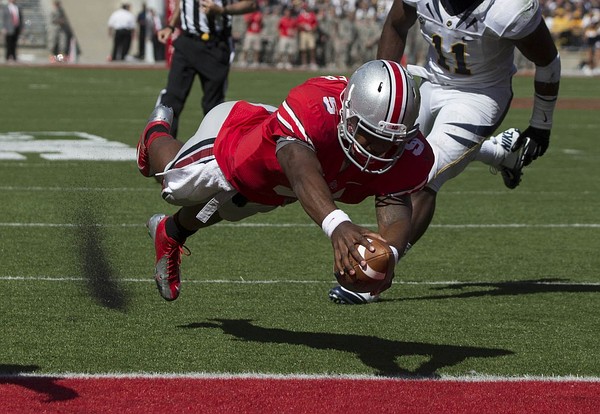 There used to be a time when the rushing touchdown leaderboard always came down to the elite running backs. These days, the running backs receive stiff competition from dual-threat quarterbacks. More specifically, in the Big Ten, Kain Colter, Taylor Martine and Braxton Miller. Will a signal-caller lead the Big Ten in rushing scores this fall? See Tom Dienhart and Brent Yarina's picks in this post.

Tom: Braxton Miller, Ohio State – First, know this: The Buckeyes will have one of the top offenses in the Big Ten-if not the nation. The points figure to come fast and furious for Ohio State. And Miller will be at the hub of the scoring activity. Last season, he tallied 13 rushing touchdowns. That number should soar this fall with a more veteran cast around a player who will be in the thick of the Heisman race. Yes, the staff wants Miller to pass more and rely less on his legs. But when the Buckeyes get down in the red zone-which will be often–Miller?s wondrous running skills will be amplified either in called plays or marvelous improvisations. The field is shorter, passing is more difficult and yards are tougher to come by. Miller can turn it into a backyard game and win because he?s usually the best player on the field. Oh, and you know there will be many occasions this fall when Miller just busts off a long scoring run vs. inferior foes. Add it all up, and the junior will be a rushing TD machine.
Dark horse: Taylor Martinez, Nebraska

Brent: James White, Wisconsin - Consider this: White has averaged a touchdown every 13.2 carries in his first three seasons, including a career best 10.4 a season ago. Now, consider this: the highly underrated and undervalued speedster racked up his 32 career rushing scores while sharing a backfield with John Clay and Montee Ball as a freshman and the latter as a sophomore and junior. You're right, White will lose carries to fellow burner Melvin Gordon, and he's no longer in Bret Bielema's system that yielded gaudy rushing statistics. Regardless, White's role is certain to increase (10.6 carries per game in career), he'll be running behind a perennially stout offensive line, and new coach Gary Andersen insists he isn't going to mess with Wisconsin's bread and butter on offense. The result? A lot of rushing touchdowns, both for White and Gordon.
Dark horse: Kain Colter, Northwestern

@BTNBrentYarina Riley Bullough.. Gonna get all the goal line carries

?@BTNBrentYarina: Next topic: Who will lead the #B1G in rushing scores this fall?? @Ameerguapo of course #Huskers

@BTNBrentYarina Imani Cross @ITC32 of the Huskers of course. #GBR