Web links: All your reaction to 2015 conference slates 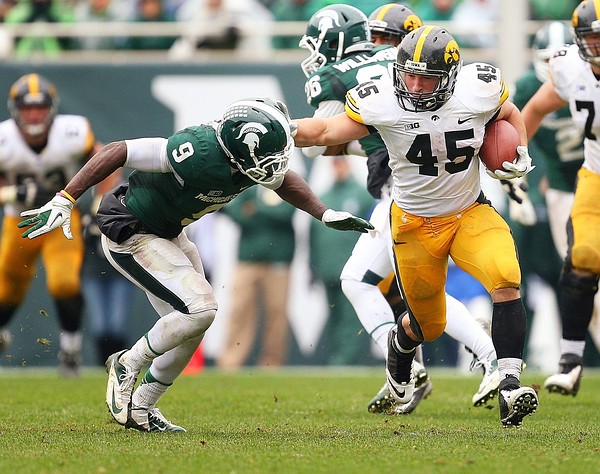 The Big Ten released its 2015 league schedule yesterday. The 2015 version is the same as the 2014 edition-only home games in 2014 become road games in 2015; and vice versa. For Michigan State, that?s a bad thing, as the Spartans arguably have the toughest slate 2015 league slate.

Not only are there road games at Michigan, at Nebraska and at Ohio State. But the Spartans also have a non-conference game vs. Oregon.

Here?s some analysis of other 2015 schedules:

THINGS TO CONSIDER FOR O'BRIEN: Penn State is off to a good start in putting together its 2014 recruiting class, as Bill O?Brien already has 10 commitments. In fact, it could end up being a Top 20 class nationally. But O?Brien must be mindful with a scholarship limit of 65, notes Bob Flounders of PennLive.com. Right now, the math seems fuzzy on how O?Brien is going to crunch these numbers to keep Penn State at its NCAA-mandate scholarship limit. But, I have a feeling he?s gonna figure it all out.

GALLON THE NEXT NO. 1?  The No. 1 jersey is sacred at Michigan. It?s a number reserved for top-flight receivers, with luminaries like Braylon Edwards donning it. Well, it looks like Jeremy Gallon could be poised to be the next Wolverines wideout to wear the special number.

Jeremy Gallon?! Does he deserve an honor that in addition to Edwards the likes of Anthony Carter and David Terrell also have donned? I mean, Gallon is good. But, is he great? Is he No. 1 jersey material?

STICKING BY RUTGERS: Facts are facts: It hasn?t been a good few months for Rutgers. Still, Big Ten commissioner Jim Delany says the Scarlet Knights still will be in the league in 2014.

?You should rest assured that Rutgers will be a member of the Big Ten, on time, in place,? Delany said Monday after a news conference at Yankee Stadium to announce a deal with the Pinstripe Bowl.

To review: Rutgers basketball coach Mike Rice was fired for cursing and throwing balls at players and generally acting like a lunatic, and athletic director Tim Pernetti was forced out for not dumping the lunatic sooner. Then, Rutgers hires an athletic director (Julie Hermann) who allegedly was verbally abusive while coaching Tennessee?s volleyball team in the 1990s. Oh, and did I mention Rutgers hired a men?s hoops coach (ex-Scarlet Knight Eddie Jordan) who doesn?t have a degree?

KEY TO DANTONIO'S SUCCESS: Mark Dantonio has led Michigan State to a school-record six consecutive bowls, and a win over Michigan in 2013 would mark the first time in 51 years that the Spartans have beaten the Wolverines in five of six meetings. So, what?s the key to his success? It?s all right here. And, it?s free to you. Lucky you.

SPECIAL WOLVERINES: Now that Michigan is a several months removed from its run to the national title game, a few things have emerged. One revelation: When the staff realized the freshman class of Caris LeVert, Nik Stauskas, Glenn Robinson III, Spike Albrecht and Mitch McGary was special. Turns out, that revelation came very early.

Crazy to think that Michigan and Wisconsin haven't played since 2010 and won't in 2014 or 2015. Could be six years between matchups.

My take: This just isn?t right.

Officially, OSU will play Northwestern just once from 2009-15. Buckeyes will not play Nebraska from 2013-15. Gene Smith not a fan of latter.

My take: Not having Ohio State and Nebraska playing often isn?t good for anyone.

If they Big Ten added John Hopkins as an affiliate member, why couldn't they add Notre Dame in everything but football?

My take: This is all true.

Indiana now has as many helmets (5) as it does wins in the past two seasons. At least the chrome stripes are cool.