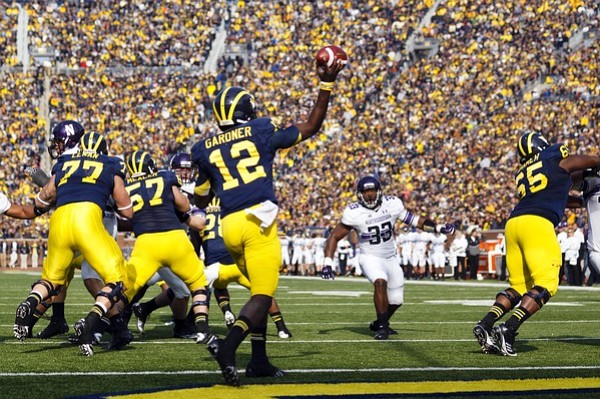 A year ago, few, if any, would have pegged Penn State's Matt McGloin to lead the Big Ten in passing yards. He did, and did so in dominating fashion, finishing 395 yards ahead of Taylor Martinez despite playing two fewer games. Will another unexpected, under-the-radar guy lead the Big Ten in passing yards in 2013? BTN.com's Tom Dienhart and Brent Yarina offer their picks in this post.

Tom: It will be whoever is quarterbacking Indiana: Tre Roberson, Cameron Coffman or Nate Sudfeld. The winner in the quarterbacking derby likely won?t be decided until toward the end of training camp. I?m guessing Roberson will win the post, which he held last season before breaking a leg in the second game that ended his 2012 season. All Coffman did was come on to rank second in the Big Ten in passing after arriving from a JC. Bottom line: Whoever is quarterbacking the offense of coordinator Seth Littrell is going to pile up numbers-big numbers. This is a go-go attack that wants to throw often and get off as many plays as possible. It?s built to build big passing numbers. And Roberson will benefit from throwing to one of the top receiving corps in the Big Ten while also working behind a veteran line.
Dark horse: Christian Hackenberg, Penn State

Brent: Devin Gardner, Michigan – Put it this way: Gardner averaged 243.8 passing yards in Michigan's final five games last season despite spending the first nine weeks – not to mention entire offseason – as a full-time receiver. If he can do that with limited practice and preparation, there's no telling how good the quarterback-turned-receiver-turned-quarterback can be when he devotes 100 percent of his time and energy to the position. People may doubt Gardner due to a small sample size or a lack of weapons in the receiving game, but that's not smart. Spread Gardner's '12 passing yards out over 13 games, and he would have thrown for 3,169 yards, second only to Matt McGloin. As for pass-catchers, Gardner boasts a big-play threat (Jeremy Gallon) and a talented tight end (Devin Funchess), so it could be worse. Also, let's not forget, Gardner completed 59.5 percent of his attempts and tossed 11 touchdowns, to five interceptions – again, after transitioning from receiver.
Dark horse: Andrew Maxwell, Michigan State

@BTNBrentYarina @BigTenNetwork Probably won't wear Hawkeye black and gold, whoever it is.

@BTNBrentYarina @BigTenNetwork Judging by the stats @dg1two threw up at the end of the season, he should be a front-runner #goblue

@BTNBrentYarina @BigTenNetwork Not sure but whoever it is, he'll play against Illinois this season.