Web links: Who picked MSU to finish ahead of Nebraska? 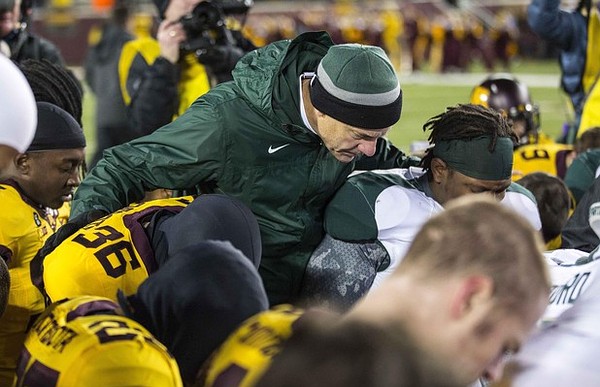 JC transfer Tanner McEvoy is primed to begin competing for the Wisconsin quarterback job. And, I can?t wait to check out the kid, who began his career at South Carolina. The dual-threat McEvoy is supposed to be a great fit for the Badgers offense.

?That?s all I?m looking for, is a chance,? McEvoy told the Wisconsin State Journal. ?I?ll let the coaches decide and play it out from there.?

It?s a crowded Badger quarterback situation that will be among the most interesting in the nation to watch unfold during training camp, with five signal-callers in contention.

In short, the 2015 league slate is the flipside of the 2014 slate. It will be the last season before the Big Ten moves to a nine-game conference schedule in 2016.

RANKING THE SCHEDULES: Brian Christopherson of the Lincoln Journal Star has a nice ranking of the Big Ten 2013 schedules here.

I just don?t see it.

GREEN IN BLUE: No doubt, Michigan needs help at running back. And incoming freshman Derrick Green can provide it at a position that most coaches feel is one of the easiest for a newcomer to help at. Some recruiting services ranked Green as the nation?s top prep running back.

And, as Mark Snyder of the Detroit Free Press points out, if Green needs inspiration, he can turn to Anthony Thomas and Mike Hart-two freshman backs who impacted in Ann Arbor.

CLOSE LOOK AT EXPANSION: A nice read from Chris Vannini of the Detroit Free Press on conference expansion in general with a look back on what it took for Michigan State to get into the Big Ten way back when.

T Lawrence Thomas? E Shilique Calhoun? LB Taiwan Jones? DB Demetrious Cox? CB Trae Waynes? I am going with Calhoun, who looks like he could be a force off the edge with William Gholston gone. I also am eager to see Thomas, a former fullback whose athletic ability will be an intriguing fit on the interior.

A Penn State game in Ireland has been discussed in various media reports in recent months. Now, the Orlando Sentinel reports that a team of UCF administrators returned from Ireland recently after a four-day trip to do "due diligence" on a potential future game against Penn State.

This is a great move by Penn State, with the game overseas serving as a de facto bowl game. In fact, it will be better than 90 percent of the bowls. Would you rather play in, say, the Gator Bowl in Jacksonville ? or go to Ireland? Enough said.

IN-STATE ILLINI TALENT: Matt Daniels has a top-10 list of the most important Illinois prep players Tim Beckman will have in 2013.

No. 1: RB Josh Ferguson. He could become a difference maker for the Fighting Illini in new OC Bill Cubit?s attack. And, this is an offense in need of some playmakers.

HIGH ON SPARTANS: No big shock here: Former Michigan State great Mateen Cleaves expects the Spartans to have a great 2013-14.

"This is not a knock against Michigan, but if you just look at what Michigan State has coming back, it's hard to pick any (Big Ten) team over them," Cleaves said

No argument from me.

Joey King is a native of Eagen, Minn., and will be the only native son on the Golden Gophers? roster.

Jabrill Peppers says a 40-yard race with Denard Robinson would "be close." Kid's got swag to spare.

My take: Yes, you have to like the confidence of the Michigan recruit.

Gopher hoops has lured players from FIU & Drake. Rest of Big Ten shaking in its sneakers.

My take: Hey, you have to start somewhere.