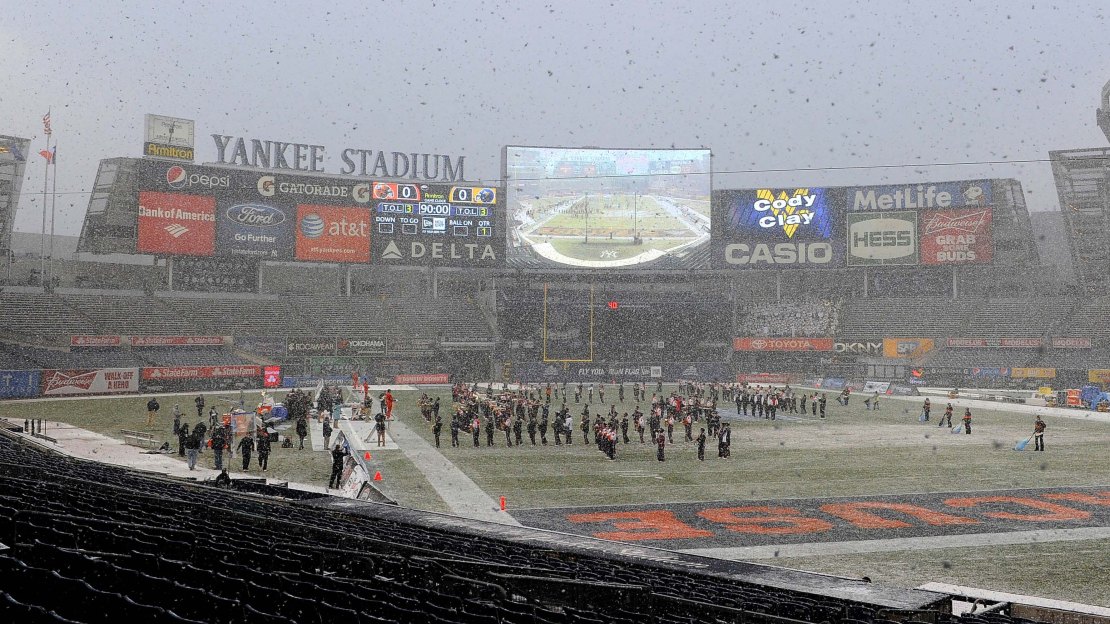 Today, it was announced that the Big Ten has an agreement with the New York Yankees and the New Era Pinstripe Bowl to be part of a growing postseason event. The deal is for eight years, beginning in 2014 and extending through 2021.

?Once we saw the success of the New Era Pinstripe Bowl, it became obvious - especially with the Big Ten?s growing East Coast footprint - that being in the media capital of the world at one of sports? most renowned venues was a natural pairing,? Big Ten Commissioner James Delany said in a statement. ?By agreeing to an eight-year partnership, it increases the likelihood that most of the Big Ten schools will have the opportunity to participate in the game, while giving our coaches, student-athletes, administrators and fans the opportunity to experience the nation?s biggest metropolis and an iconic setting like Yankee Stadium.?

This move was anticipated. At Big Ten meetings in Chicago a few weeks ago, athletic directors said the league was working to add the Pinstripe Bowl– which began in 2010 and has pitted the Big East vs. the Big 12–to its new postseason lineup beginning in 2014.

The Big Ten also will have a significant branding presence in Yankee Stadium during regular-season games with a fixed sign along the first-base line and home plate rotating signage.

Reports also indicated that the Big Ten is expected to add the Holiday Bowl in San Diego and the Fight Hunger Bowl in San Francisco in 2014. If so, the Big Ten will have bowls in every major California market. The Big Ten also is expected to form an alliance starting in 2014 with the Music City Bowl, which previously was part of the league?s postseason docket.

The agreement with the Pinstripe Bowl pushes the Big Ten deeper into the massive New York metropolitan area, the world?s biggest media market. And that?s a big deal in the Big Ten?s quest to grow its brand, revenue and reach across an ever-competitive conference landscape. This toehold in the mega New York area sets the Big Ten apart from every other major conference. And, in the end, that eventually could help the league from a competitive standpoint-particularly in recruiting.

The league took its first step toward penetrating the New York market by adding near-by Rutgers, which will join in 2014. (Maryland also will join that year). The Big Ten also announced earlier that it will open an office in New York to further enhance its presence in Gotham.

Who will the Big Ten play in the Pinstripe Bowl? Some reports think it will be an ACC school.

And, according to a report, the deal announced today also will include ?additional future conference events? at venerable Yankee Stadium.

This is a great idea, if true. Maybe even better than the Pinstripe Bowl. I can envision ?preseason? games in Yankee Stadium in late August, with Big Ten teams kicking off the season vs. high-profile schools from other leagues in "The House That Jeter Built."

Big Ten schools could take turns playing early-season games–maybe even conference games; maybe even a double-header–in Yankee Stadium, as the league takes a metaphorical spot along Madison Avenue and Broadway to become ?the? conference of ?the greatest city in America.?

Heck, would the league ever consider playing the Big Ten championship game in NYC? I know indoor venues are preferred. But, this IS New York City.

Now, what type of basketball presence will the Big Ten have in New York? Just wondering.