Dienhart: How do Big Ten LB units stack up? 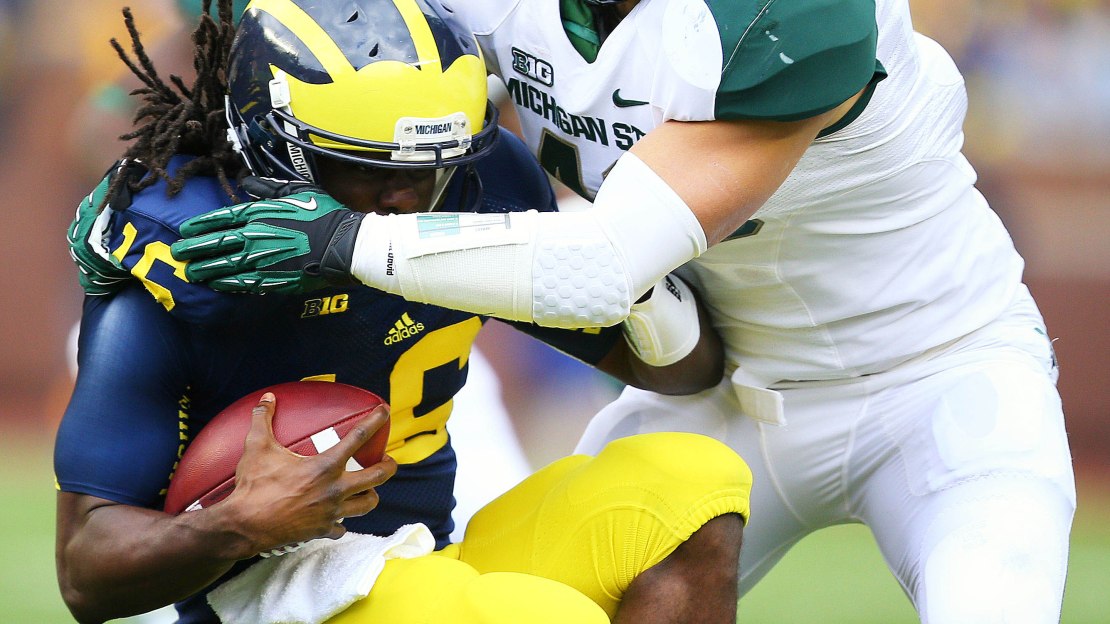 The last two seasons, no Big Ten defense has played as well as Michigan State?s. A big reason for that has been the play of the linebackers. And that unit should continue to excel and be the bellwether of the conference?s linebacking corps in 2013. Here is my ranking of the Big Ten linebacking units.

1. Michigan State. An embarrassment of riches. Senior Max Bullough leads the charge in the middle. Look up ?football player? in the dictionary, and there is Bullough. Fellow senior Denicos Allen, a fleet athlete who is on the strong side, may be the fastest linebacker in the Big Ten. Kyler Elsworth is another capable option on the strong side. At 6-3, 232 pounds, junior Taiwan Jones is a physical beast who excels vs. the run. He could be poised to breakout.

2. Ohio State. This unit hasn?t been up to Ohio State standards in recent years. Well, this year?s group of linebackers is representative of past great OSU corps. Junior Ryan Shazier is a flat-out stud on the weak side who may be playing his last year in Columbus. At 243 pounds, sophomore Joshua Perry is built to stop the run on the strong side. It?s all coming together for junior Curtis Grant in the middle, a former five-star recruit. Sophomore Cam Williams is on the rise.

3. Michigan. The Wolverines received a blow when Jake Ryan blew out a knee in the spring. At first, it was feared he would miss the season. But it now looks like Ryan could be back as soon as October. Good thing, because he?s an emerging star. Middle man Kenny Demens is gone, but the other key cogs are back for a versatile crew. Junior Desmond Morgan is a speedy option on the edge with 18 starts. Sophomore Joe Bolden turned heads last season, as did fellow sophomore James Ross III. Both have big futures. Junior Cameron Gordon is an active force.

4. Iowa. The Hawkeyes have questions at a lot of spots. But linebacker isn?t one of them. In fact, this could be one of the Big Ten?s top units. All three starters are back-and all are seniors. Anthony Hitchens led the team with 124 stops. James Morris (113) and Christian Kirksey (95) also are back.

5. Northwestern. There are some nice options here. Chi Chi Ariguzo is a legit star who is moving to the weak side from the strong side with David Nwabuisi gone. Senior Damien Proby and junior Collin Ellis are versatile enough to start in a few spots. Look for Proby in the middle with Ellis backing up on the strong and weak sides. Sophomore Drew Smith will be a factor on the strong side and may start for a unit with nice athletic ability.

6. Wisconsin. The new staff has installed a 3-4 base scheme. So, adjustments have been made. Senior Brendan Kelly has gone from being an end to an outside linebacker. Senior Chris Borland is back for one more season of havoc-wreaking. Mike Taylor is gone, but redshirt freshman Vince Biegel looks more than capable. Senior Ethan Armstrong is a steady force. There is nice depth with seniors Tyler Dippel and Conor O?Neill.

7. Nebraska. This unit has a lot to prove. Alonzo Whaley and Will Compton are gone. But there is a raft of intriguing and speedy youngsters who are athletic, including redshirt freshmen Jared Afalava, Thomas Brown and Michael Rose. Athletic sophomore David Santos also looks to have a bright future. And former JC transfer Zaire Anderson is back after a knee injury trashed his 2012 season. Afalava could be the stud of the bunch. Don?t forget about junior Trevor Roach, the classic overachieving Nebraska walk-on.

8. Penn State. There may be a lack of depth with Gerald Hodges and Michael Mauti off to the NFL. Senior Glenn Carson will start in the middle and be flanked on one side by junior Mike Hull. Look for touted redshirt freshman Nyeem Wartman to start on the other side. Ben Kline, Gary Wooten and Charles Idemudia also figure in. Freshman Brandon Bell may help.

9. Illinois. Some nice promise. Jonathan Brown is one of the Big Ten?s best, a tackling machine who goes sideline to sideline from the weak side. Mason Monheim and Mike Svetina impressed as freshmen and are looking for more. Monheim could be special in the middle. Sophomore Eric Finney, a former JC transfer, looks good at ?star,? a combination safety and linebacker, with Ashante Williams gone.

10. Minnesota. Questions abound. Senior outside linebacker Aaron Hill is the lone starter back. Redshirt freshman Jack Lynn and JC transfer Damien Wilson are battling in the middle to take over for Mike Rallis. Senior James Manuel, a former safety, is competing at the other outside slot. Ex-running back Lamonte Edwards also is in the mix. Stay tuned, as five linebackers were signed in February.

11. Purdue. Here is all you need to know: The Boilermakers? top linebacker is a former quarterback: junior Sean Robinson. Enough said. This position has an abyss for nearly a decade, with an alarming lack of production and playmaking ability. Robinson will play on the strong side. Look for fellow junior Joe Gilliam in the middle, but he?ll be pushed by redshirt freshman Jimmy Herman. Senior Will Lucas is on the weak side-for now. Redshirt freshman Andy James Garcia will be a factor.

12. Indiana. There has been a concerted effort to inject more speed and athletic ability to this unit the last two years. And, it?s showing a bit. Former JC transfer David Cooper can cover some ground. Junior Chase Hoobler is a lunch-pail type who relies on technique and savvy. Griffen Dahlstrom is a steady force who relies on guts and guile.