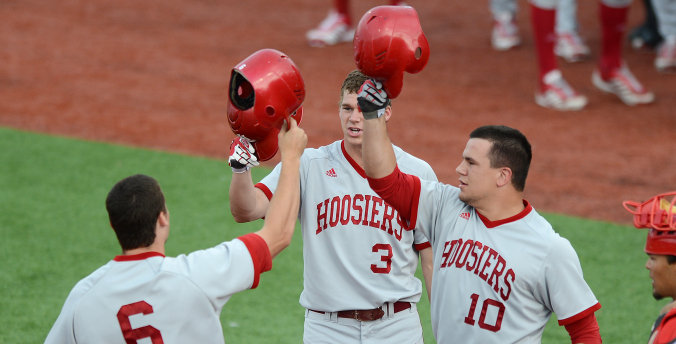 Sam Travis homered to help power Indiana past Austin Peay 15-6 on Saturday night and into the regional title game. Scott Donley and Michael Basil each drove in four runs for the Hoosiers (45-14), who will play the winner of Sunday afternoon?s elimination game between Valparaiso and Austin Peay.

Indiana trailed 3-0 after Reed Harper?s three-run homer in the bottom of the first. But the Hoosiers didn?t wait long to respond. They scored five times in the top of the second, getting a two-run single by Kyle Schwarber, Travis? two-run homer and a run-scoring passed ball.

Indiana added two runs in the fourth, and four each in the fifth and sixth innings.

Mike Yastrzemski doubled twice, tripled and drove in three runs to lead Vanderbilt to a 10-4 victory against Illinois in an NCAA regional game on Saturday.

Tony Kemp added four hits and scored three runs as the Commodores (53-9) rallied from a two-run deficit to advance to their fifth consecutive regional final. Four players had at least three hits as Vanderbilt out-hit Illinois 17-5.

In the fifth, Yastrzemski smacked a two-run double to tie the game. He stole third and scored the go-ahead run on Conrad Gregor?s ground out. The Commodores tacked on five runs in the eighth.

Illinois (35-19) appeared to tie it in the fifth with a double steal, but the run was negated due to batter?s interference.