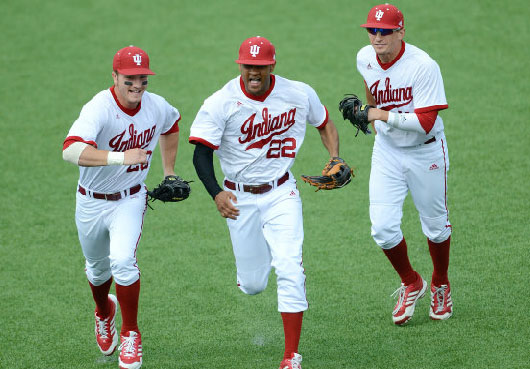 Catcher Kyle Schwarber homered, Justin Cureton made a critical leaping catch and Indiana earned its first regional title by beating Austin Peay for the second consecutive night, winning 6-1 in the championship of the Bloomington Regional on Sunday.

The Hoosiers (46-14) will play Florida State in next week?s Super Regional in Tallahassee.

?With every step we take, it seems like we?re making history with Indiana baseball,? Hoosiers coach Tracy Smith said. ?It?s fun. That was certainly a memorable evening for us.?

Indiana got three runs in the first inning on Schwarber?s solo shot to right field and RBI singles by Michael Basil and Casey Smith.

That run support proved to be plenty for the Indiana pitching staff, which allowed only six hits and struck out eight. The pitchers got plenty of help from their defense, especially from Cureton, who robbed P.J. Torres of a three-run homer with a difficult catch over the wall in the second.

Six Indiana players made the All-Tournament team, including Sam Travis, who was named the regional?s most outstanding player. Travis went 2-for-4 with a double on Sunday.

Matt Gonzalez doubled in the go-ahead run as Georgia Tech scored four times in the ninth inning to rally past Illinois for a 6-3 win in an NCAA tournament elimination game Sunday.

With the Yellow Jackets (36-26) trailing 3-2, Kyle Wren tied it with an RBI single. Gonzalez, who entered as a pinch runner in the sixth, smacked the next pitch into the right-center field gap to score Wren.

The Illini (35-20) took a 3-2 lead in the eighth on an inside-the-park home run by Jordan Parr when center fielder Brandon Thomas collided with right fielder Daniel Palka. It was Parr?s third homer of the regional.