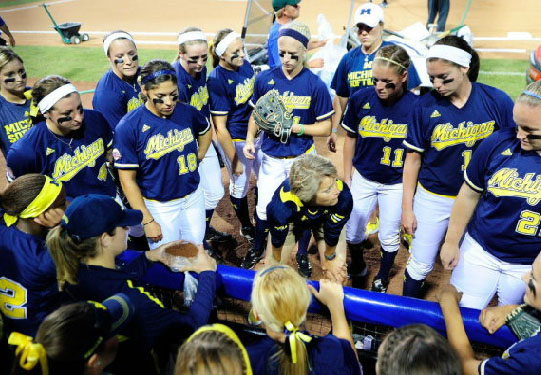 Romero?s third-inning smash against starter Dallas Escobedo (30-6) landed on a walkway at the front of the right-field bleachers.

Arizona State, the 2008 and 2011 national champions, was shut out for the first time all season.

Driesenga (31-8) allowed seven singles and walked three as Michigan (51-12) advanced to another elimination game on Sunday against Washington.

The fifth-seeded Sun Devils (50-12) failed to score after loading the bases with no outs in the fifth. Amber Freeman grounded into a double play and, after cleanup hitter Haley Steele was walked intentionally, Bethany Kemp struck out swinging.

The first pitch wasn?t until six minutes before midnight because the preceding game between Florida and Nebraska went 15 innings. It didn?t end until nearly 3:30 a.m. ET.

The 14th-seeded Cornhuskers (45-16) scored once in the bottom of the 15th, but their chance for a third-tying rally ended with Tatum Edwards getting called out on a blown call at third base.

Nebraska had scored three times in the seventh to force extra innings and Taylor Edwards tied it again in the 10th with a home run to match Briana Little?s solo shot in the top half of the inning.

It ended up as the fifth game to go 15 innings or longer at the Women?s College World Series. The longest game was in 1984 and lasted 25 innings.