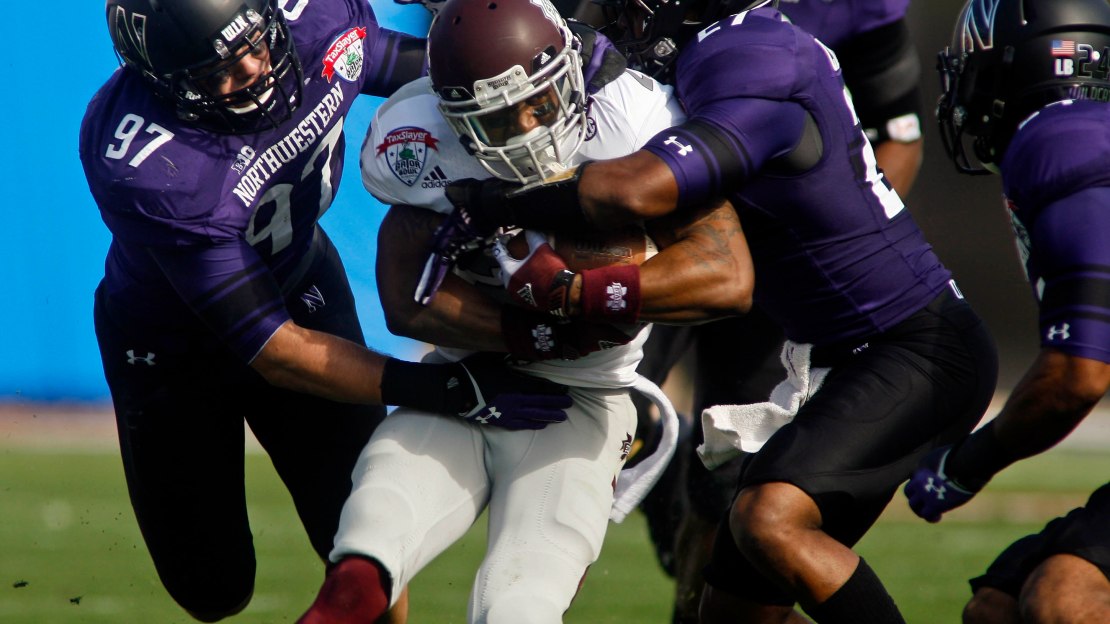 The biggest difference between the SEC and Big Ten isn?t speed at the skill-positions on offense. Nope. It?s on defense-along the line, in particular. The Big Ten has some big fellas who can make plays and get up the field-just not the depth and breadth of the SEC. But, the situation is improving. Here is my ranking of the Big Ten defensive lines.

1. Ohio State. Hard to think this unit could rank this high with all four starters-John Simon, Nathan Williams, Johnathan Hankins, Garrett Goebel–from last year gone. But, it?s true. The Buckeyes are loaded with great young players up front, all of whom got their feet wet last season. ?Leo? Noah Spence, end Adolphus Washington and tackle Tommy Schutt are all sophomores on the rise. Look for veteran tackle Michael Bennett, a junior, to start alongside junior nose man Joel Hale, with Spence and Washington at the ends. Speaking of Washington, he may be the best of the bunch.

2. Wisconsin. The Badgers will operate out of a 3-4 scheme under new coordinator Dave Aranda. And he?ll have plenty of talent to choose from up front. Massive senior Beau Allen (335 pounds) and his long, flowing hair will line up on the nose.  And a pair of seniors will start at end, with Pat Muldoon on one side and Ethan Hemer-a former walk on–on the other. Hemer (319) is a big end. Stopping the run shouldn?t be an issue for this front; but pass rushing may be. Sophomore Jake Keefer may help.

3. Michigan State. Yes, end William Gholston is gone along with tackle Anthony Rashad White. But this still will be a strong front. Sophomore Shilique Calhoun looks primed to be a force at end opposite junior Marcus Rush, a pass-rusher deluxe. Junior James Kittridge and senior Tyler Hoover are big forces on the inside at tackle. Keep an eye on sophomore Lawrence Thomas, a former fullback who may have found a home. Senior Micajah Reynolds is a big veteran inside.

4. Michigan. Not long ago, this was an area of weakness. Now, the Wolverines have a deep and talented group. End Craig Roh and tackle William Campbell are gone. Junior Frank Clark needs to emerge as a force off the edge. He?s capable. Sit back and watch. Sophomore end Mario Ojemudia also could break out. Jibreel Black (3-technique) and Quinton Washington (nose) should form a nice tackle tandem. Massive sophomore Ondre Pipkins also will play a big role inside. Keep an eye on true freshman end Taco Charlton, an uber-athletic early enrollee.

5. Northwestern. This could be one of the Wildcats? better fronts in years, even with tackle Brian Arnfelt and end Quentin Williams gone. Senior end Tyler Scott is one of the Big Ten?s top pass rushers. He?s the Big Ten?s leading returning sacker (9). Junior tackle Sean McEvilly is an anchor inside. Junior Chance Carter could break out alongside McEvilly at tackle. Sophomores Dean Lowry and Deonte Gibson will battle to play opposite Scott. Each is capable. Keep an eye on athletic redshirt freshman end Ifeadi Odenigbo, one of the biggest recruits in recent school history. He could be a third-down pass rusher.

6. Penn State. Losing tackle Jordan Hill hurts. End Sean Stanley also is gone. But there?s talent. It begins with sophomore end Deion Barnes, who was the Big Ten Freshman of the Year in 2012. He just makes plays up field. Junior C.J. Olaniyan and sophomore Anthony Zettel also will play big roles. And keep an eye on junior Brad Bars. Inside, there are some worries. Big senior DaQuan Jones will hold down one spot. Junior Kyle Baublitz is back after moving inside from end last season. Redshirt freshman Austin Johnson has promise.

7. Nebraska. This unit is under pressure to improve. Tackle Baker Steinkuhler and ends Cameron Meredith and Eric Martin are gone. Senior end Jason Ankrah is one of the few vets. Who will join him up front? This group will be impacted significantly by a raft of newcomers, including JC transfer pass rusher Randy Gregory. Redshirt freshman ends Avery Moss and Greg McMullen need to impact. Inside, senior Thad Randle needs to plug the run, but he seemingly always battles injury. Sophomores Kevin Williams and Aaron Curry need to make moves. Fans are salivating to see massive redshirt freshman Vincent Valentine, a run-stuffer. His time has arrived.

8. Purdue. Tackle Kawann Short?s playmaking on the inside will be missed. He?s off to the NFL. But talent remains. Junior end Ryan Russell is primed to breakout into a pass-rushing force. Senior Bruce Gaston could be the next Boilermaker tackle drafted. Sawed-off senior tackle Brandon Taylor is difficult to wedge from the hole. Sophomore Ryan Watson-the top Purdue recruit in 2012–is a youngster to watch inside. Former JC transfer Greg Latta, a senior, and junior Jalani Phillips are other options at end.

9. Iowa. This unit has lagged in recent years. Where are the playmakers? And vets Joe Gaglione and Steve Bigach are gone. A pass rusher is needed. Senior end Dominic Alvis may be the guy. Maybe not. Sophomore Drew Ott looks like the other end. Big junior Carl Davis needs to muck up the works on the inside at a tackle spot that features decent depth. Sophomore Darian Cooper has shown promise early on the inside, along with Louis Trinca-Pasat. Redshirt freshmen end Faith Ekakitie and tackle Jaleel Johnson could make early impacts.

10. Minnesota. This group begins and ends with senior tackle Ra?Shede Hageman, a monster of a man and future first-round draft choice who almost turned pro. Junior Cameron Botticelli, a former walk-on, will figure in on the interior. Aside from Hageman, size is an issue inside. The search is on for a pass rusher with D.L. Wilhite gone; he was one of the Big Ten?s best. Sophomore Theiren Cockran may be a playmaker. Junior Michael Amaefula looks to start opposite Cockran.

11. Illinois. Lots of work to do with the likes of end Michael Buchanan and tackle Akeem Spence gone as NFL draft picks. The lone starter back is senior end Tim Kynard. Who is gonna make plays? Former linebacker Houston Bates may be a guy at the other end. Junior Jake Howe figures in on the nose. Can he stuff the run? Redshirt freshman tackle Vontrell Williams could emerge. Junior tackle Austin Teitsma has bulked up. Keep an eye on JC transfer Abens Cajuste, who could play end or tackle. He?s special.

12. Indiana. It?s a constant struggle for this unit. Veteran tackles Larry Black, Jr., and Adam Replogle are gone. They were stalwarts. Junior end Ryan Phillis is the closest thing to a playmaker on this front. Fellow junior end Bobby Richardson has shown an ability to be a difference-maker. The staff likes sophomore end Zack Shaw. Inside, redshirt freshman Ralphael Green and sophomore Alex Todd bring beef for a unit that too often gets run over.