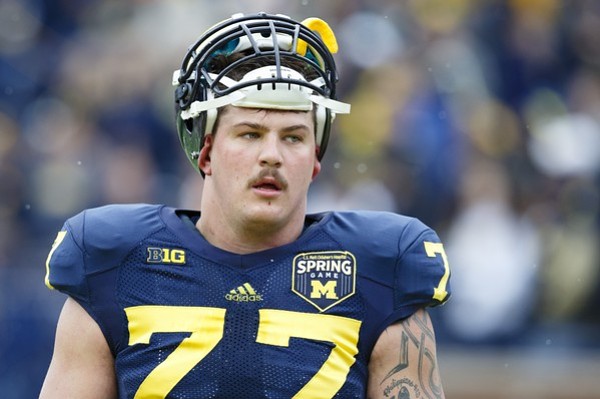 It all begins up front. Ask any coach. Without good blockers, skill talent is diminished-and offenses flounder. The Big Ten has some potentially strong blocking units, which has hopes high in several precincts. Here?s my ranking of the Big Ten offensive lines, starting with two of the conference's biggest powerhouse programs.

1. Ohio State. Line coach Ed Warinner continues to work wonders, transforming this into one of the Big Ten?s top units. Four starters are back in 2013, with only Reid Fragel gone from right tackle. Junior left guard Andrew Norwell, who also started five games at tackle last season before sliding inside, is a special talent. Tackle Jack Mewhort joins Norwell to form a strong left side. Right guard Marcus Hall is a bull with lots of experience, while Corey Linsley is an agile and forceful pivot. Sophomores Taylor Decker and Chase Farris are the top options at right tackle.

2. Michigan. The Wolverines received a big offseason surprise when stud left tackle Taylor Lewan eschewed the NFL and opted to return for his senior season despite being projected by some as a top-10 NFL draft choice. Lewan, who has started 28 games in a row, may be the top lineman in the nation. Senior right tackle Michael Schofield is a force. Is there a better tackle tandem in the Big Ten? The interior is being replaced, however, with guards Ricky Barnum (left) and Patrick Omameh (right) along with center Elliott Mealer gone after combining for 70 starts. Sophomore Jack Miller could be the answer at center. Redshirt freshman guard Kyle Kalis could be a future star. Ben Braden and Erik Magnuson also are touted on the interior. Lots of quality options.

3. Wisconsin. The line is always a strength in Madison. And that will be the case again this fall, despite the loss of center Travis Frederick-a first-round pick–and tackle Ricky Wagner. Ryan Groy is the top blocker. He?s Mr. Versatile, starting a game at every spot up front but right tackle in 2012. He may end up as the left tackle this season. Massive junior Rob Havenstein (6-8, 342) is back at right tackle.  Redshirt freshman center Dan Voltz has a big future. Juniors Dallas Lewallen and Kyle Costigan are physical guards.

4. Nebraska. This may be one of the school?s better fronts in recent memory, even with guard Seung Hoon Choi and center Justin Jackson gone. Senior guard Spencer Long is the leader. He?s the quintessential story of a Nebraska walk-on-turned-stud. Keep an eye on JC guard Chongo Kondolo. Depth at guard abounds with players like sophomore Jake Cotton, junior Mike Moudy, and senior Andrew Rodriguez-who also can play tackle. Senior Cole Pensick may be the answer at center. Plenty of options at tackle, including seniors Jeremiah Sirles, Rodriguez, Brent Qvale and JC transfer Matt Finnin.

5. Penn State. This ended up being one of the league?s best and most physical units last season. Credit line coach Mac McWhorter. A big reason for success was guard John Urschel. He is a smart cookie whose blocking acumen matches his book acumen. And that?s saying a lot, if you know Urschel. Experience abounds in the likes of junior left guard Miles Dieffenbach; senior right tackle Adam Gress, who will replace Mike Farrell; senior center Ty Howle, who takes over for departed Matt Stankiewitch; sophomore left tackle Donovan Smith, who is a future star. Depth? It?s a bit iffy.

6. Michigan State. It wasn?t long ago when this unit struggled. Now, it?s one of the strongest areas of the Spartan offense. Coach Mark Staten does a good job. Guard Chris McDonald will be missed. The unit took a hit recently when junior tackle Skyler Burkland ended his career because of injury; that could cause some line shuffling. But tackle Fou Fonoti is back and as formidable as ever. A foot injury ruined Fonoti?s 2012. Senior guards Blake Treadwell and Dan France are forces on the interior. Junior Travis Jackson is a top center. Sophomore Jack Allen is a versatile sub whose role may increase with Burkland gone.

7. Northwestern. This is an underrated group paced by junior center Brandon Vitabile and junior tackle Jack Konopka. They must lead the way for a unit that lost tackle Patrick Ward and guards Neal Deiters and Brian Mulroe. Look for Konopka to move to left tackle with Ward gone. Sophomore Geoff Mogus should be next to Konopka at left guard. The right side will be totally new with sophomore Shane Mertz or junior Paul Jorgensen at tackle and Adam DePietro or sophomore Matt Frazier at guard.

8. Iowa. This is always a strength in Iowa City, right? It should be good in 2013. Junior left tackle Brandon Scherff may be the next great Hawkeye lineman, but he?s coming off a broken fibula and dislocated ankle suffered in October. Senior right tackle Brett Van Sloten is a good book end. Senior Conor Boffeli (left) and junior Andrew Donnal (right) are at the guard slots. Donnal is coming off a knee injury in October that ended his season. Austin Blythe was a starting guard as a redshirt freshman in 2012 but is now a center with James Ferentz gone.

9. Minnesota. This unit was plagued by injuries last season, but line coach Matt Limegrover kept the unit together. The result-better depth for a young unit. Senior left tackle Ed Olson will be the bellwether. Look for junior Zac Epping next to Olson at guard. The right side figures to have sophomore Josh Campion at tackle and junior Caleb Bak at guard. Sophomore Jon Christenson and junior Ohio State transfer Brian Bobeck are at center. Keep an eye on junior guard Tommy Olson, Ed?s younger brother, and massive (6-9, 308) redshirt freshman tackle Jonah Pirsig.

10. Purdue. This could be a solid unit with lots of veterans. And Jim Bridge, lured from Illinois, is a good coach. Robert Kugler was thrust into the starting lineup late last year at guard and impressed. Now, he?s penciled in to start at center as a sophomore. The kid could be special. Some staffers think the best lineman is senior left tackle Kevin Pamphile, a former defensive tackle. Senior Justin Kitchens is an athletic right tackle who lacks bulk. Massive senior Devin Smith (6-7, 315) is a former JC transfer who can push the pile at left guard. Coaches like senior Cody Davis at the other guard, along with redshirt freshman Jordan Roos.

11. Indiana. This unit isn?t overly big or physical, but it?s improving. A better push is needed in the run game. The left side sophomore tandem of tackle Jason Spriggs and guard Dan Feeney is a heck of a foundation. Each turned heads as true freshman starters in 2012. Junior right guard Bernard Taylor is the closest thing to a mauler this group has. Junior Collin Rahrig assumes the center spot from departed Will Matte. Junior right tackle Peyton Eckert has made 18 career starts.

12. Illinois. This unit was an unmitigated disaster in 2012, as injuries and youth caused havoc. Goal No. 1: be more physical. That starts on the left side with junior tackle Simon Cvijanovic and junior guard Michael Heitz. Right guard Ted Karras was a big contributor as a redshirt freshman last season. Is there a better feel-good story in college football than right tackle Corey Lewis, who is back for a sixth season? He is back after missing over two years while getting over five knee operations. Junior Alex Hill takes over for Graham Pocic at center.