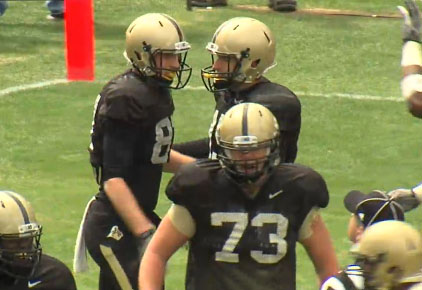 So far, so good for new Purdue coach Darrell Hazell. He?s still 0-0. Optimism bubbles. The honeymoon continues. Purdue A.D. Morgan Burke seems very pleased with his hire. In fact, he thinks Hazell has answered every key question up to this point. I?m not gonna argue with that. Hazell has impressed. He also has built a good staff and energized the players. This is my first link in today's daily Big Ten headlines.

Burke needs to have gotten this hire right. It?s a huge one, the biggest at the university since Burke tabbed Joe Tiller before the 1997 in one of the best hires ever made in Purdue history. I hate to think were Purdue would be if Tiller hadn?t breathed life into the moribund program. Now, it?s Hazell?s turn to revive Purdue. The Boilermakers athletics department needs Hazell to be a home run hire.

Let's get to some more links.

Michigan State has several concerns on offense coming off a disappointing 7-6 season. What?s gonna happen at quarterback? Will the receivers play better? Who will be the top running back? Another question: tight end.

Dion Sims emerged last season as one of the Big Ten?s best. He was an athletic freak who posed a mismatch quandary for defenses. But Sims opted to turn pro early, creating a void. As Diamond Leung of MLive.com points out, no Spartan tight end caught a pass in the spring game. And one tight end, Juwan Caesar, has transferred.

The two returning tight ends with starting experience have been banged up, and the other two on the roster are freshmen. Wait, there?s more: The tight ends will have a new position in co-offensive coordinator Jim Bollman. Got all of that?

What if a four-team playoff replaced the BCS in 1998, the year the dreaded BCS was born? Well, for one thing, Scott Dochterman of the Cedar Rapids Gazette thinks that Iowa likely would have made playoff three appearances-maybe four.

Dochterman has broken down what the playoff field/major bowls likely would have looked like each season from 1998-2012 under the coming playoff system that will begin in the 2014 season. Very interesting stuff.

The legendary Sid Hartman of the Minneapolis Star-Tribune has a nice read on Gophers coach Jerry Kill, who seeks recruits to fill out his young roster.

Kill has few scholarships to give next year, so he and his staff must make astute choices if it hopes to continue its upward trend.

?The next recruiting class will be a very small one, so (we can?t) afford to make any mistakes,? Kill told Hartman. ?Scholarship-wise, it?s always hard to tell exactly what you?ll have, but it won?t be a big class. It will be a class that we certainly need to bring some difference-makers in. That part of recruiting is going good right now and I think the recruits we?re talking to feel good about the direction we?re headed.

?We still have guys on the road and we will have - you get a certain amount of days to get your recruiting in, and we still have a couple more days. We?ll have everyone off the road and in the office on Thursday.?

Who says some things never change? Penn State?s jersey for 2013 will be tweaked. Nothing major. Have a lookie here.

But will last names continue to be on the back of jerseys? We will have to wait and see.

Iowa broadcasting legend Jim Zabel died recently. Pat Harty of HawkCentral.com has an interesting and personal look at another side of Zabel most didn?t see.

And here is a nice photo tribute to Zabel.

Incoming Indiana freshman hoopster Stanford Robinson is part of one of the top recruiting classes in the nation.

The 6-4 combo guard (think Victor Oladipo) left Paul VI Catholic High School in Fairfax, Va. - one of the most successful programs in the D.C., area - and transferred to Findlay Prep in Henderson, Nev., near Las Vegas. Robinson will try to win an off-guard spot alongside point man Yogi Ferrell.

Slowly but surely, the Illinois hoop picture for 2013-14 is coming into focus.

ESPN bracket guru Joe Lunardi thinks Illinois is a fringe NCAA team that will be relegated to taking part in a play-in game next season in Dayton, Ohio. As Mark Tupper of the Decatur Herald-Review points out: It makes sense, given that Illinois is losing 63.8 percent of its scoring and 53.5 percent of its rebounding. Here is the starting lineup projected by Tupper: Nnanna Egwu starting at center, Illinois State transfer Jon Ekey at power forward, Joseph Bertrand at small forward, Rayvonte Rice at shooting guard and Tracy Abrams at point guard.

Michigan may have the nation's consensus No. 1 recruiting class after Peppers' commit. The league's not getting easier.

My take: Jabrill Peppers is exactly the type of talent the Big Ten needs.

Jabrill Peppers looks like a fantastic football player. But comparing him to Woodson at this juncture isn't fair.

If the Big Ten were expanding by two schools tomorrow instead of six months ago, Rutgers would be quite the interesting sell.

My take: Don?t you wonder if there is some buyer?s remorse? There has to be some serious questions about the leadership at Rutgers.