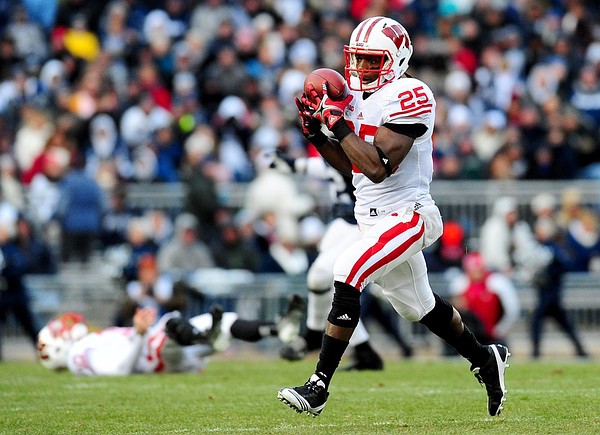 The Big Ten lost its top two rushers in Michigan State?s Le?Veon Bell and Wisconsin?s Montee Ball. And Nebraska standout Rex Burkhead also is gone. But most of the conference?s other top running backs are back. Here is how I rank the Big Ten running back units, and it's my latest look at how the various football teams units stack up by position. Read the others right here. Agree? Disagree? Tell me in the comments below, email me about here, or track me down on Twitter (@BTNTomDienhart).

1. Wisconsin. Montee Ball and his NCAA-record 83 touchdowns and 5,140 career yards rushing are gone along with a pile of accolades. He also ran for a Big Ten-high 1,830 yards in 2012. But don?t weep for the Badgers. Senior James White ran for 1,052 yards in 2010 and has 2,571 career rushing yards; he can score on any carry. Sophomore Melvin Gordon is a slasher who teems with potential, while Jeffrey Lewis is bigger back who can move the pile.

2. Northwestern. Lots of options, led by senior Venric Mark. The pint-sized Mark has a burst, rushing for 1,366 yards last year; no returning Big Ten back ran for more yards. He was the first NU back to crack the 1,000-yard barrier since 2006. Workmanlike junior Mike Trumpy is back. Malin Jones arrived with some hype before redshirting as a freshman. Sophomore Treyvon Green adds depth to a loaded position.

3. Ohio State. Every key contributor from last season is back. Senior Carlos Hyde (970 yards) and junior Rod Smith (214) are big backs. Senior Jordan Hall will play a Percy Harvin-type role; he?s shifty speedster who was limited to seven games in 2012 because of a bad foot. Sophomore Bri?onte Dunn is another big back who has a burst. Braxton Miller led the team with 1,271 yards rushing.

4. Nebraska. Yes, Rex Burkhead is gone. But he missed six games last year because of a knee injury. That allowed junior Ameer Abdullah to emerge, and the sawed-off speedster capitalized with 1,137 yards rushing. Physical freak Imani Cross is back to move the pile as a sophomore. Incoming freshmen Adam Taylor or Terrell Newby could play key roles.

5. Michigan. The Wolverines need better production from the tailback spot. It will help that senior Fitz Toussaint should be ready to go after suffering a season-ending broken leg vs. Iowa in 2012. He needs to regain his 2011 form, when he ran for 1,041 yards. And Michigan welcomes freshman Derrick Green, who is considered by many to be the top prep back in the nation. There?s depth here too with junior Thomas Rawls and sophomore Justice Hayes also in the mix.

6. Penn State. When Silas Redd transferred to USC prior to last season, many wondered how the Nittany Lions would get significant production from the running back spot. Junior Zach Zwinak emerged from nowhere to run for 1,000 yards. Akeel Lynch is a promising redshirt freshman who could be a difference-maker. Junior Bill Belton, a former receiver, is a speedster who is poised to breakout.

7. Iowa. At one time, this was a hexed position. Remember the injuries? The transfers? But no more. All of that pain and suffering has resulted in proven depth. Junior Mark Weisman emerged last season to become a star en route to rushing for 815 yards. Junior Damon Bullock is capable. Sophomore Jordan Canzeri is back from a knee injury that cost him 2012.

8. Indiana. A loaded Hoosiers? offense will get a push from two nice backs in burly senior Stephen Houston and sophomore Tevin Coleman. Houston is a physical back who ran for 749 yards and 12 scores last season. And Houston has great hands, grabbing 37 passes. Indiana wants to be more physical, especially in the red zone. These two backs are capable but need better play up front.

9. Minnesota. The Gophers want more big plays from their backs, and better line play will help. This is a workmanlike crew led by compact and powerful junior Donnell Kirkwood, a productive grinder who had 926 yards rushing in 2012 after struggling with hamstring issues earlier in his career. Will this be the year junior David Cobb finally fulfills his potential? He looked good in the spring and is the top athlete of the unit. Sophomore Rodrick Williams is a 235-pound back who can bang. Keep an eye on incoming freshman Berkley Edwards, who could impact.

10. Illinois. There are no Rashard Mendenhalls or Mikel Leshoures, but the Fighting Illini have a couple of nice options in physical junior Donovonn Young (571 yards rushing) and speedy sophomore Josh Ferguson. Each excels at catching the ball. Young led the team and paced Big Ten backs with 38 catches; Ferguson had 29. Better play by the line will help an offense that ranked 11th in the Big Ten in rushing last season. Illinois wants more of a downhill attack.

11. Michigan State. So many unknowns, as no one emerged in the spring to take over for workhorse Le?Veon Bell, who carried a league-high 382 times in 2012 and ran for 1,793 yards. His 137.9 rushing yards per game led the Big Ten. Redshirt freshman Riley Bullough moved from linebacker and impressed. Diminutive junior Nick Hill has the most experience. Also back are junior Jeremy Langford and smallish redshirt freshman Nick Tompkins. Keep an eye on incoming freshmen Gerald Holmes, R.J. Shelton and Delton Williams. One could win the job.

12. Purdue. New coach Darrell Hazell wants a physical attack. Does he have the backs to do it with Akeem Shavers gone after leading the team with 871 yards rushing in 2012? Is Akeem Hunt a guy who can carry the load as a No. 1 back? The jury is out, but the diminutive senior has nice speed. At 258 pounds, junior Brandon Cottom is the ultimate power back. Redshirt freshman Robert Gregory, a converted quarterback, turned some heads in the spring. True freshman David Yancey could get a shot after arriving early for spring ball.