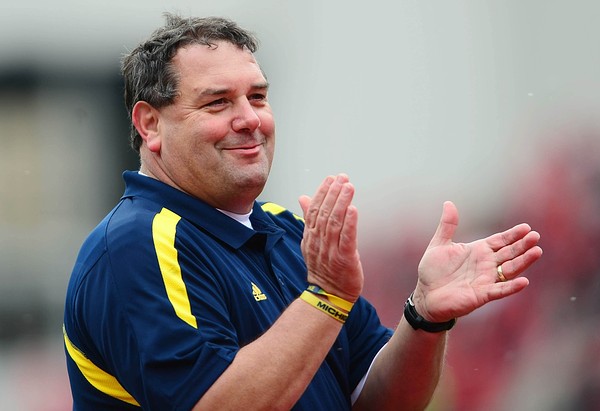 It's time to reach into my weekly mailbag. Lots of interesting cards and letters this week. Brady Hoke? Penn State schedule predictions? Indiana football on the rise? Ohio State and the chip on its shoulder?

So, let?s get to it. See my answers to your questions in this post.

I realize trying to kid and rib Ohio State is part of the Michigan-Ohio State rivalry. But if Brady Hoke's team loses again to Urban Meyer (he?d be 0-2 head-to-head with Meyer and OSU would be 11-2 over last 13 meetings), doesn't all the stuff he says just look arbitrary without getting results? It looks like Jan Brady putting on the wig to try to stand out. – Michael

First off, your Jan Brady reference is epic and much appreciated from this child of the 1970s. As for Hoke and his ?needling? of the Buckeyes, I think it?s fun, refreshing and good for the rivalry. As a ?for instance,? Hoke refusing to say ?Ohio State? and instead insisting on saying ?Ohio? is harmless. But it adds some fuel to what?s one of America?s best rivalries. It sure beats having someone with Bill Belichick?s personality.

The schedule sets up well for Penn State this year.

After the chaotic mess that Bill O'Brien walked into last year, I expect the run up to this year to look much more normal and organized. With the talent that the Nittany Lions have, I expect them to open with a 5-0 record.  I think Ohio State is a loss, and Nebraska and Wisconsin are probably losses because Penn State is operating with a shallow depth chart and injuries will probably take a toll by then. Illinois, Minnesota and Purdue are probably all wins. Because it's at home and early in the season, I think Penn State?s October game against Michigan is the swing game between an 8-4 and 9-3 record. If it goes like this, O'Brien will have proven himself a second time and (if I'm him, anyway) may catch the first bus out of Happy Valley for greener pastures before the program really starts to feel the bite of the sanctions. – Luke in Nebraska

Nice analysis. I hope for Penn State?s sake that O?Brien doesn?t leave. He apparently gave the NFL some thought after last season but opted to remain. O?Brien seems committed, but he could be frustrated if he feels not everyone is backing him-which may be the case.

As for Penn State?s record, here is how I pencil in wins and losses:

I think the Indiana defense will be better. By midseason, they will be kicking some serious booty. This is a bigger, faster and much stronger team. If the Hoosiers can keep Kevin Wilson, he will be putting them on the national football map! – Al Pittman

I like the direction of Indiana?s program, too, but maybe not as much as you do. Wilson is doing some nice things. His most recent recruiting class was one of the school?s best in recent memory. And the Indiana offense was one of the Big Ten?s best last season and will be in 2013, as well. The defense? It?s getting better, but there still is a lack of top-end speed and athletic ability. If the defense can go from bad to average, Indiana could be good and reach its first bowl since 2007.

I agree with you 100 percent, Tom. Nebraska simply does not have elite talent, especially on defense. My question is why can't the Cornhuskers seem to get that level of talent, or develop good players to great players? – Shane

Bo Pelini had some good defenses early in his Nebraska tenure, but the units have been inconsistent recently. I think Pelini is a good coach and that he has a scheme that works. But talent has been an issue. Facts are facts: Just two Nebraska players were selected in the 2013 draft, the school?s worst performance since 1969. Alfonzo Dennard and Rex Burkhead are the only Pelini recruits to be drafted, and neither was picked higher than the sixth round. Some things to consider for the lack of NFL production: Injuries have been a factor; and the players were recruited for the Big 12 style then moved to the Big Ten-which impacted the defense in 2011 and 2012. And many players had multiple position coaches. JC transfer Daimion Stafford had two coaches in two years. Baker Steinkuhler had three in five. Eric Martin had four coaches in four years. So, those are a few reasons why the defense has struggled recently.

As a Minnesota fan, I am excited about next season. Jerry Kill and his staff will be in their fourth year with a team that will be more physically ready and a team that will have much more experience. One last thing: tackle Ra'Shede Hageman will be defensive player of the year in the Big Ten. – Anthony Zasada

Like you, I am excited about the direction of the Golden Gophers under Kill, who I think is a terrific coach who has a strong staff. The offense needs to develop some big-play ability. And the defense needs its rebuilt linebacking corps to step up and for some pass rushers off the edge to emerge. If so, Minnesota?s bowl prospects could rise. As for Hageman, he is a freak.

But I?m not sure if he?ll be able to win Big Ten defensive player of the year honors. Since the award was started in 1990, only five tackles have won it: Illinois? Moe Gardner in 1990; Purdue?s Jeff Zgonina in 1992; Ohio State?s Dan Wilkinson in 1993; Penn State?s Jared Odrick in 2009; Penn State?s Devon Still in 2011. But-who knows?-maybe Hageman can join that select group.