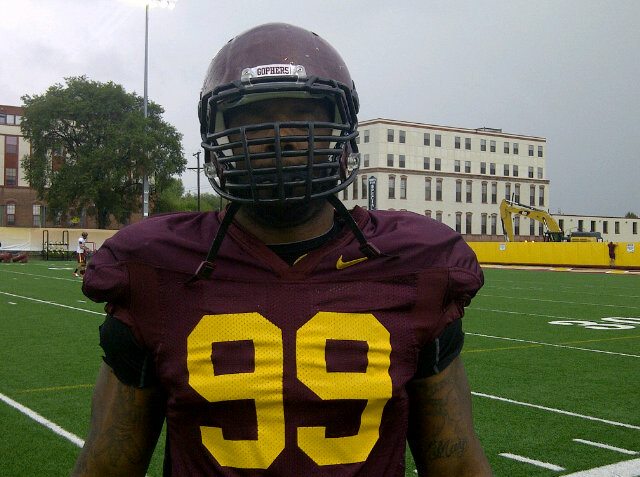 The struggles of the Michigan State offense last season are well-documented. Points were difficult to come by for an attack that lost five games by a total of 13 points. All the while, quarterback play came under scrutiny. Michigan State quarterbacks coach Brad Salem says the competition between Andrew Maxwell and Connor Cook is ?pretty even.?

Maxwell exited spring drills as the No. 1 guy. But, fans recall he was benched during the game-winning drive of the Buffalo Wild Wings Bowl last season in favor of Cook. Don?t discount incoming freshman Damion Terry making an impact. In fact, Salem expects Terry to help in some fashion this fall, giving MSU an athletic option under center that could help energize the offense.

CRAZIEST ATHLETES: Bruce Feldman of CBSSports.com has a list of 20 craziest athletes in college football.

No surprise to see South Carolina defensive end Jadeveon Clowney No. 1. Minnesota defensive tackle Ra?Shede Hageman came in at No. 2. Michigan offensive tackle Taylor Lewan is No. 4; Wisconsin linebacker Chris Borland is No. 9. Northwestern running back Venric Mark and Ohio State quarterback Braxton Miller just missed the cut. Speaking of Miller, how did he not make the Top 20? You are telling me Texas A&M quarterback Johnny Manziel, who made the list at No. 6, is more freakish than Miller? No way.

NO MORE PIZZA, PIZZA: It looks like the Little Caesar?s Pizza Bowl is out. And a bowl sponsored by the Detroit Lions in Ford Field is in.

Nothing earth-shattering. A lower-tiered Big Ten team will take part. But instead of playing a MAC school, the Big Ten will take on the ACC. I guess this is an improvement.

WHO'S UNDER CENTER? So, who is leading the race to be Iowa?s quarterback? Kirk Ferentz recently said Jake Rudock-who has two years in the program–has a slight edge over Cody Sokol and C.J. Beathard.

?I said a month ago that if we were playing tomorrow, it would be Jake,? Ferentz told the Cedar Rapids-Gazette. ?He?s more experienced. I think in fairness to all three guys, we need to let them compete. There?s no need to make a decision right now. To me nobody?s really separated from the pack. We have time available. Why not let them compete and see what happens??

IN BARRY WE TRUST: Andrew Logue of the Des Moines Register has a nominee for the new college football committee that will select playoff teams. It?s Wisconsin A.D. Barry Alvarez.

As Logue points out, Alvarez has thick skin, wry wit and no-nonsense demeanor to make him impervious to Twitter attacks. Plus, the guy flat-out knows football.

Nebraska icon Tom Osborne thinks a Legends Poll might be the ?best method? to help with the coming college football selection process.

Me? Why don?t we just develop a committee that mimics what is used in the NCAA basketball tourney selection process? That seems to have worked well. Is there really a need to reinvent the wheel?

SOCIAL MEDIA'S ROLE: The Illinois staff is immersed in social media. But, heck, if a staff isn?t, it has no chance to compete in recruiting. Or does it?

Illinois coach Tim Beckman is one of only five Big Ten coaches who have an account. Urban Meyer doesn?t; Kirk Ferentz doesn?t. Bill O?Brien doesn?t. But all the SEC and ACC coaches do. Hmmm. You thinking what I?m thinking?

SPARTAN SCHEDULE: If you don?t feel like reading, here?s the Michigan State schedule in pictures.

Speaking of the Spartans, Michigan State A.D. Mark Hollis describes Mark Dantonio as a ?stoic presence, and yet, with much compassion.? Sounds perfect.

Dantonio also is very successful: A school-record six consecutive bowl games and the Spartans' best five-year stretch against Michigan (4-1) since 1965-1969, would seem to indicate as much. The guy has become one of the school?s all-time best.

JOEBOT ALERT! David Jones of PennLive.com says ?Joebots?-yes, ?Joebots? (what a great term!) are in danger of driving out Bill O?Brien.

Jones describes these people as having a zeal that cannot be unplugged. It would threaten their very beings. Jones goes on to say that Joebots are a group of self-appointed experts and charlatans who feed off a cause –€“ what they feel was the unjust treatment of Joe Paterno –€“ and hop aboard to champion it. For some, the cause is a way to make them seem noble. Some genuinely believe in it. Some are merely using it and the people involved to further their own more cynical interests.

The byproduct of all of this, according to Jones, could be to force O?Brien to get fed up and bolt.

ARE GOPHERS REBUILDING? Amelia Rayno of the Minneapolis Star-Tribune wonders if next season is a rebuilding year for Gophers hoops.

I think so. The Big Ten won?t be much easier next season. Yes, Andre and Austin Hollins will form a nice backcourt to build around. And new coach Richard Pitino has energized the program. But Minnesota will miss the inside presence of Trevor Mbakwe and Rodney Williams. Bottom line: This team may be fortunate to make the NIT next season.

Last day for Tom Osborne at NU will be June 30. In typical Osborne fashion, he says: "Life will go on fine without me"

My take: Difficult to believe he soon will be gone.

Is it wrong that I'm not giddy about there being only 100 days to college FB kickoff? #enjoysummer

Seriously, though. I'll take Bridgewater. Louisville's schedule is trash, and He's really good. Perfect Heisman combo if ever there were one

My take: Yes, Teddy Bridgewater has a legit Heisman hope. But Braxton Miller figures to be right there, too.

So, @B1G is looking to replace a bowl at Ford Field that regularly gives it an instate foe & big crowd for a game vs. a 3rd-tier ACC club?

My take: No doubt, MAC fans are more likely to attend the game than ACC fans of a seventh-place team that is hundreds of miles away.