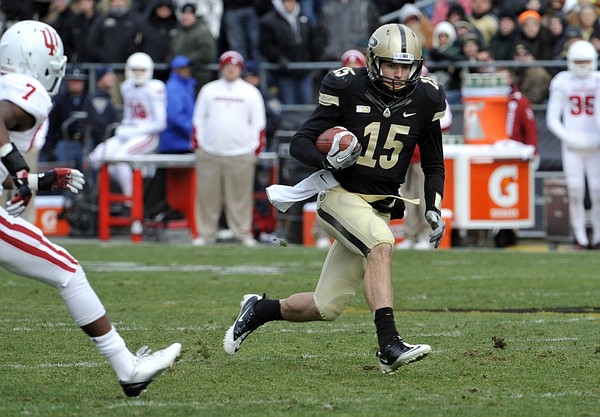 John Shoop long has admired Purdue?s offensive tradition from afar. Now, he gets a chance to add to that tradition by pushing the buttons on the Boilermakers? attack under first-year coach Darrell Hazell.

Shoop, 43, brings a strong background to West Lafayette. He began his career as a volunteer at Dartmouth in 1991 and then became a G.A. at Vanderbilt from 1992-94. Shoop then moved on to the NFL, where he was a quality control coach for the Carolina Panthers in 1995 and eventually became quarterbacks coach. He then went to the Chicago Bears in 1999 as quarterbacks coach before ascending to offensive coordinator. Shoop next coached quarterbacks for the Tampa Bay Buccaneers and Oakland Raiders before become offensive coordinator at North Carolina for Butch Davis.

I caught up with Shoop to get his views on the Purdue offense as the program heads into the offseason.

Q: Were you pleased with where the offense was as you exited spring football?
A: I don?t know if anyone is pleased. I think we recognized we have a lot of work to do. A lot of production has moved on from this program. The two quarterbacks, a strong running back, some strong receivers. We have to replace a lot of production. I was pleased with the effort of our guys. Every practice, they worked their tails off and tried to leave their comfort zones. And in meetings, as well. We were a lot better at the end of Practice 15 than we were at the start. But we have a lot of work to do. This is a good group of guys who will work.

We have to improve at some skill positions. We really have to get good at wideout, tight end and running back. We want equal opportunity between those spots. I think it?s good for morale to get everyone involved. Everyone has a lot of work to do in that regard. But I?m excited. I hope we?re physical and I hope we?re explosive off of some of that run game.

Q: Is there enough big-play ability in this offense?
A: Other offenses I have been on have done a good job of getting the ball down field. Carolina, we had guys like Hakeem Nicks and Brandon Tate, Greg Little-those guys could run by people. We also got good at conflict of assignment passes. If we get good at those, that?s one way to get behind 11 defenders, making the same things look different. That?s one way to throw the ball deep. Another way to have big plays is to hit someone short in man-to-man and let them do the work.

Q: Does your extensive NFL background help in recruiting?
A: I think so. I only have been a college coach for five years. But there was a three-year window at North Carolina when we had more offensive players drafted than any team in the country except I think for Georgia and USC. I think that has been attractive in recruiting. But what?s attractive is having production and being good. I think our quarterbacks will get good here. There?s a lot of tradition at that position here. Really good quarterbacks tend to attract really good wideouts. The better T.J. Yates got for us at North Carolina, the better our wideouts got. Good players wanna play with good players. If we can get the quarterback rolling here, a lot of good players will wanna come here.

Q: When will you decide on a quarterback?
A: There are some guys competing for it. That?s one position that I feel strongly about. Rob Henry is a super athlete and a better passer than I anticipated. He performed at an efficient level in scrimmages. That was pleasing. Austin Appleby and Danny Etling are doing a good job, as well. I think it?s a good situation. Competition brings out the best in you.

Q: What was your connection to Darrell Hazell?
A: When I was offensive coordinator of the Chicago Bears, Jim Bollman was our tight ends coach. Jim and I had been friends since early 2000-over 10 years. Then Jim left to become offensive coordinator for Ohio State (where Hazell was an assistant). When I went to North Carolina, our staffs would visit regularly. I guess it was through Jim that I got to know Darrell.

Q: Before coming to West Lafayette, what was your impression of Purdue?
A: I have called plays for 10 seasons; five in the NFL and five in college. And I never have called plays for an offensive head coach. I will here. I feel like at Purdue, there?s a strong offensive tradition here that I always have respected. I grew up a Steelers fan and remember Scott Campbell and Jim Everett. When I was in the NFL, I coached Brian Griese so I got to know Bob a little bit. I followed Drew Brees. There is a great tradition here for offensive football. And that has been really appealing to me.

You know, there is a big statue of a Boilermaker outside my office window here. That?s my image of this place; it?s blue collar. We are gonna go to work. I really, really like that. There is nothing pretentious about Purdue. It strikes me as one of the more authentic places in the country. I promise you this: This community will get a good day?s work from our staff and players.