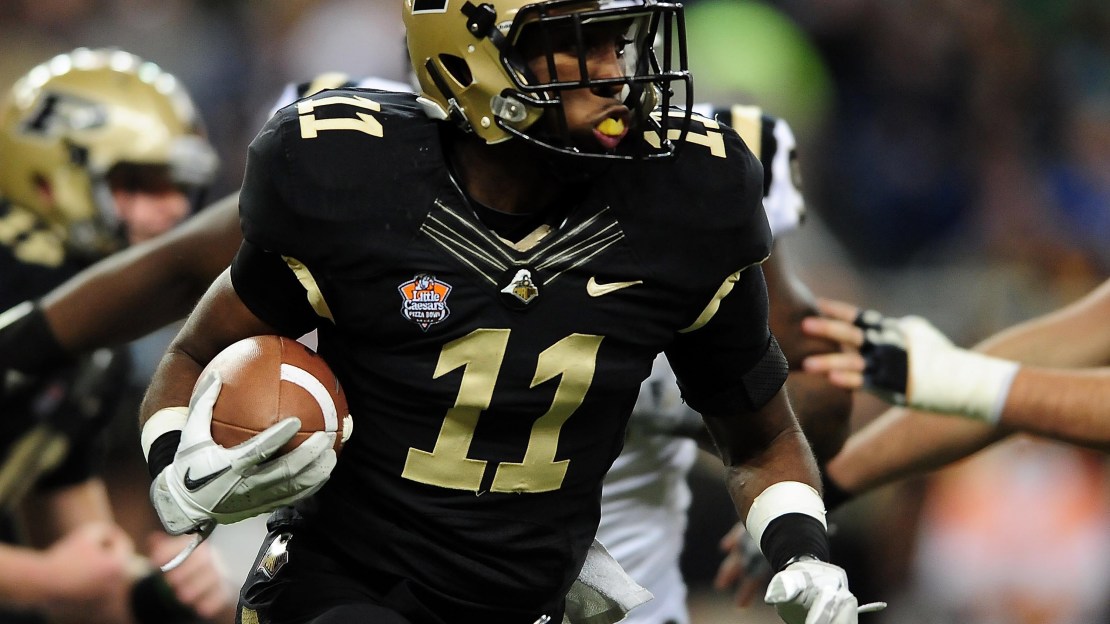 First-year coach Darrell Hazell has his work cut out for him, playing arguably the toughest schedule in the Big Ten. There is no more challenging non-conference schedule in the conference, with a trip to Big East co-champ Cincinnati and home games vs. Notre Dame (BCS title game) and Northern Illinois (Orange Bowl). Getting one Big Ten road victory may be a difficult proposition, too. Bottom line: A 1-6 start isn?t out of the question.

The back end of the schedule is a bit kinder. November home games vs. Iowa and Illinois are the closest things to sure wins for the Boilermakers, who may struggle to reach a bowl for a third consecutive season.

Toughest non-conference game: A season-opening trip to Cincinnati won?t be a walk in the park in what will be Tommy Tuberville?s debut as Bearcats coach. Think he wants to open with a home loss to Purdue? But let?s go with the visit from Notre Dame on Sept. 14. The Fighting Irish have had their way with the Boilermakers of late, winning the last five meetings-and seven of eight.

Toughest conference game: Yes, the visit from Ohio State on Nov. 2 will be tough. But the trip to Wisconsin may be more perilous, as wins in rollicking and raucous Camp Randall Stadium are difficult to come by. The Badgers haven?t just beaten Purdue in recent years; they have absolutely clobbered Purdue, winning seven in a row. In that stretch, the Boilermakers have scored 20 points in a game just once. And every Badger win but one has been by double-digits. The last four meetings have been massacres: 37-0 in 2009; 34-13 in 2010; 62-17 in 2011; 38-14 last season. In 2011, Wisconsin had 605 yards (364 rushing); last year, the Badgers had 645 yards (467 rushing). Get the picture?

Who they don?t play: The Boilermakers miss Northwestern, which may have one of its best teams ever. Purdue also avoids Michigan, another top Legends Division contender. And the Boilers miss improving Minnesota, which whipped Purdue last year.

Easiest game: A visit from FCS Indiana State on Sept. 7 will be welcomed, but ISU won?t be a total pushover. The Sycamores are on the rise and led by first-year coach and ex-Boilermakers assistant Mike Sanford.

Rugged stretch: The Boilers have three toughies in succession beginning with a visit from Nebraska on Oct. 12. The Cornhuskers figure to be the Legends Division favorite. That?s followed by a trip to Michigan State, which may have the best defense in the Big Ten and has beaten the Boilers four times in a row. After a bye week, Purdue welcomes likely Big Ten favorite Ohio State. Just a brutal hat trick. If the Boilermakers can win one of those games, it will be considered a big success.

Interesting factoid: A visit from Ohio State on Nov. 2 will be tough. But the Boilermakers have had a weird whammy on the Buckeyes, winning the last two meetings in West Lafayette and three of the last four in Ross-Ade Stadium. Heck, Purdue blew a late eight-point lead last season in Columbus before falling in overtime, 29-22.

Best chance to be upset: The visit from Northern Illinois on Sept. 28 is all full of danger. Yes, the Huskies have a first-year coach, but this still is a strong program that returns star QB Jordan Lynch and is coming off an Orange Bowl season. And Purdue fans no doubt recall Northern Illinois strolling into Ross-Ade Stadium and dumping Purdue the last time it visited in 2009. Jerry Kill coached that NIU team.

Best chance to pull an upset: Purdue may be getting Penn State at just the right time when it visits State College, Pa., on Nov. 16. The Nittany Lions will play with a shorthanded roster all season, having just 67 scholarship players because of NCAA probation. Penn State?s depth may be comprised by mid-November, perhaps allowing the Boilermakers to capitalize on a depleted roster and notch what could be a key victory on the way to bowl eligibility. The Nittany Lions have dominated this series, winning six in a row and going 12-2 vs. the Boilermakers since joining the Big Ten.

Must win: If Purdue is to reach a bowl in Darrell Hazell?s debut season, it must beat Iowa in Ross-Ade Stadium on Nov. 9. This is a Hawkeyes program that?s struggling coming off a 4-8 season, the program?s worst since 2000. Last season, the Boilermakers won at Kinnick Stadium for the first time since 1992, taking a 27-24 decision. Purdue needs to triumph this year in a game it likely will be expected to win. By the way: The Hawkeyes have won five of the last seven meetings.

Bye weeks: These come too close together. The first bye is Oct. 5, five games into the season. The timing is nice, as it will allow the Boilermakers extra prep time for a visit from Nebraska, which lost its only game vs. Purdue (28-0 in 1958 in West Lafayette). The second bye comes a scant three weeks later. But, like the first one, the timing is good, as it falls between a trip to Michigan State and a visit from Ohio State. Purdue will finish with five games in a row including the Old Oaken Bucket game in Bloomington. The Boilermakers will look to continue a run of dominance at Indiana in the finale, going 13-3 vs. IU in the last 16 meetings.