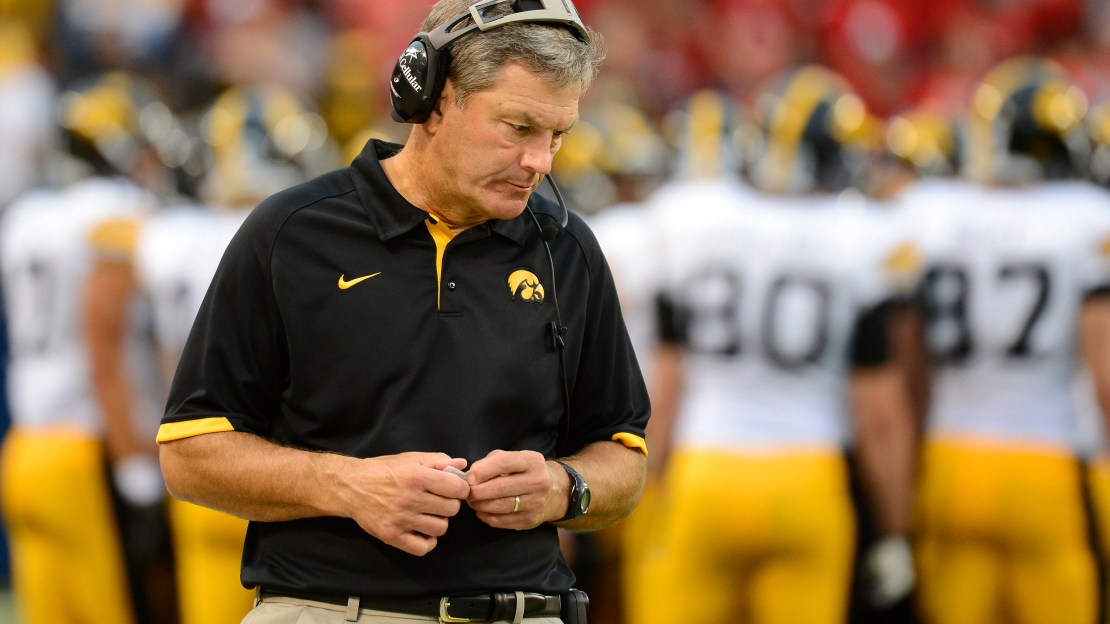 Iowa is coming off a 4-8 season, the program?s worst since 2000-Kirk Ferentz?s second season in Iowa City. That has some fans antsy. Bryce Miller of the Des Moines Register sat down with the Hawkeyes boss to discuss a variety of topics for a program that has seen its win total fall from 11 to 8 to 7 to 4 each of the last four seasons.

Iowa?s defense has a chance to be good, especially the back seven. In fact, the linebacking corps of James Morris, Christian Kirksey and Anthony Hitchens may be as good as any. The offense is the biggest key, as it looks for a quarterback for a unit that struggled to pass consistently last season.

ENOUGH WITH THE CUPCAKES: Lee Barfknecht of the Omaha World-Herald says it?s time for the Big Ten to end non-conference games vs. FCS tomato cans. Amen. I think we all can agree on this. No more games vs. East Toenail State, Faber University or Timbuktu Tech. The target date to jettison FCS foes from schedules in 2016.

Barfknecht sums up the state of the Big Ten beautifully: What this league's soft schedules, fascination with the Rose Bowl and undue hype over various ?trophy games? got it in 2012 was this: no team in the Top 15 in the final coaches poll and one player in the first round of the NFL draft (the second-to-last pick). Iowa is one of-if not the top-biggest offenders when it comes to playing cupcakes. The Hawkeyes have games set against FCS foes Missouri State, Northern Iowa, Illinois State, North Dakota State and Northern Iowa again in the next six seasons. C?mon.

DEVIN GARDNER'S BACKUP: Michigan?s depth at quarterback took a hit when Russell Bellomy suffered a knee injury this spring that will keep him out for the season. So, the backup to Devin Gardner is walk-on Brian Cleary-until touted freshman Shane Morris arrives. Michigan would like to add a fifth-year senior transfer or JC. But, that likely won?t happen.

GARDNER'S GURU: On the subject of Devin Gardner, it seems he has been working out with a quarterback guru.

Wolverines OC Al Borges has no issues with it. Besides, he can?t coach him in the offseason. And, working with a quarterback guru has helped Nebraska?s Taylor Martinez.

BECK'S THE MAN: If Nebraska fans didn?t already know that offensive coordinator Tim Beck was valuable, this should help.

You see, not only is Beck good with the Xs and Os, but he also is well-connected in recruiting circles in the talent-loaded states of Texas and Florida.

Good stuff here not just on building a football program-but on living your life.

MORE ON LEWAN'S DECISION: Former Michigan offensive tackle Jake Long shared his NFL decision-making process with Taylor Lewan, who shocked many by opting to return for his senior season-as Long also did.

"For three hours I sat there and thought about it, and it was at first a tough decision,? Lewan said in March. ?You put whatever draft, whatever pick in front of me and that?s a lot of money and a lot of opportunity to live a dream that every kid?s always wanted to live. Then you think about this place and 134 years of tradition, 42 Big Ten championships, and I want to be a part of that 43rd. I think is not that far.?

HEAD GOPHER ON THE ROAD: Nice piece by Marcus Fuller of the St. Paul Pioneer Press on Richard Pitino hitting the road to sell his program.

Pitino?s first team needs help on the inside. But the backcourt looks solid with Andre Hollins and Austin Hollins.

LOOKING TO QB NELSON: Speaking of the Gophers, the football program could be poised to take the next step in 2013 if quarterback Philip Nelson continues to mature this summer.

"The most important thing (Nelson) needs to worry about is taking care of his team," Kill said on a caravan stop promoting the school. "I think he learned that through a team-building process we went through. How we'll end up next year will be what he and Mitch do with our football team this summer and their leadership. We've gotten it to where we've gotten it, but they've got to take it that much farther. That will be the critical piece of what happens this year."

CODY IMPRESSES SCOUTS: Nice video here of Indiana?s Cody Zeller talking about his NBA Combine experience. Zeller discusses his 35.5-inch vertical jump, the best for a player 6-foot-9 or taller in at least a decade, and his 3.15 sprint time, which bettered Victor Oladipo, Tim Hardaway, Jr. and others. Thanks, Jeff Rabjohns of Peegs.com!

How high will Zeller get selected?

Coaches have been consistent that they think Jake Ryan will definitely play this year. Hoke said Ryan could be back as soon as mid-October

My take: This would be great news for Michigan?s ever-improving defense.