Schedule analysis: Can Penn State do it again? 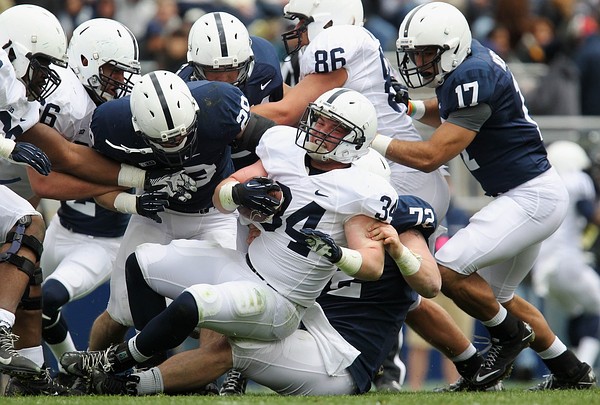 Bill O?Brien?s debut was a success, as Penn State finished 8-4 after opening 0-2 during a season wrapped in tumult. But the Nittany Lions may be in for a long season, as the effects of NCAA probation begin to sink in. Penn State will operate with just 67 scholarships, so any attrition could be devastating for a team that?s still ineligible for the postseason or to win the league championship.

The good news: The Nittany Lions open with four non-conference games that all are winnable. No doubt, a fast start-coupled with good health-could produce another strong season.

Toughest non-conference game: A season-opening game vs. Syracuse in East Rutherford, N.J., at MetLife Stadium will be challenging. The Orange are coming off a bowl appearance but have a new coach, with Doug Marrone off to lead the Buffalo Bills, and a new quarterback. These are long-time Eastern rivals who have met 68 times. Penn State has won the last four meetings and 22 of the last 25 with the last being in 2009.

Toughest conference game: The Nittany Lions have to be dreading the trip to Ohio State on Oct. 26 to play an OSU team that will be picked to win the Big Ten. The Buckeyes have had Penn State?s number in recent years, winning eight of the last 11 meetings. Ohio State leads the all-time series, 15-8.

Who they don?t play: Penn State won?t take on Michigan State and Northwestern. That?s good, as each will be among the best in the Legends Division. But the Nittany Lions no doubt would have liked a shot at a struggling Iowa program that?s coming off a 4-8 season. Still, the Hawkeyes have been a nemesis for Penn State, winning nine of the last 13 meetings.

Easiest game: A visit from Eastern Michigan of the MAC in the second game of the season on Sept. 7 should be a picnic. The Eagles notoriously are among the worst FBS schools every season. EMU hasn?t been to a bowl since 1987-its one and only postseason appearance.

Rugged stretch: The start of Big Ten play could be bumpy. The Nittany Lions open at improving and dangerous Indiana on Oct 5 and then play host to Michigan on Oct. 12; after a bye week, PSU plays at Ohio State on Oct. 26.

Interesting factoid: Penn State may be trying to cap another strong season when it visits Leaders Division power Wisconsin in the season finale on Nov. 30. The Nittany Lions topped the Badgers last season in the finale, taking a 24-21 overtime decision in State College. Penn State has won four of the last six meetings vs. a Wisconsin program that has gone to three Rose Bowls in a row.

Best chance to be upset: Penn State is 16-0 all-time vs. the Hoosiers since joining the Big Ten. And many of those verdicts have been lopsided. But that perfect run may be in peril when the Nittany Lions open Big Ten play in Bloomington on Oct. 5. This is a good Hoosiers squad that will have one of the Big Ten?s top offenses.

Best chance to pull an upset: If Penn State remains healthy, it will have a shot to win most of the games on the schedule. In fact, it wouldn?t be a surprise to see the Nittany Lions beat Michigan when the Wolverines visit State College on Oct. 12. The teams haven?t met since 2010, but Penn State has won the last three meetings. Before that, Michigan ripped off nine victories in succession vs. Penn State.

Must win: There really is no ?must win? for a team that can?t win the Big Ten or play in a bowl because of NCAA probation. But to finish the season with some mojo, the Nittany Lions need to find a way to win at improving Minnesota on Nov. 9. That?s the second game in a three-game stretch sandwiched between visits from Illinois and Purdue. Penn State probably needs to win all three games if it wants another winning season. The Nittany Lions haven?t played the Golden Gophers since 2010, winning the last four meetings after losing four in a row to Minnesota.

Bye weeks: These come too close together. The first falls on Sept. 28, after four non-conference games. The next bye comes just three weeks later on Oct. 19. But it comes at a good time between a visit from Michigan and a trip to Ohio State. Penn State will finish the season with six games in succession.

Here is the 2013 Penn State schedule: