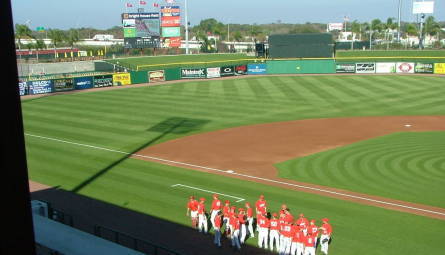 Indiana clinched at least a share of its first Big Ten baseball title since 1949 with a 7-2  victory in 11 innings against Ohio State on Friday night. The Hoosiers move to 16-7 in Big Ten play with the win over the Buckeyes and hold a 39-13 overall record. The Hoosiers can clinch the championship outright, and the No. 1 seed in the Big Ten Baseball Tournament, with a win Saturday.

ILLINOIS 4, MINNESOTA 3: Minnesota suffered its third loss in a row as the Golden Gophers fell, 4-3 to Illinois, today in a 2:25 rain-delayed game. With the loss, Minnesota falls to 29-20 on the season and 12-8 in Big Ten play. Illinois improves to 33-15 overall and 14-9 in the Big Ten, which solidified its spot in the Big Ten Tournament next week. Read more at FightingIllini.com | Read more at Gophersports.com

PENN STATE 9, MICHIGAN STATE 0: Michigan State baseball lost at Penn State 9-0. The Spartans (32-17, 11-9) managed just seven hits in the game and gave up 17 to the Nittany Lions. MSU southpaw David Garner was tagged with the loss; he went just 2 2/3 innings and gave up six runs on 11 hits. Posting the first complete game shutout of his career, junior Greg Welsh (Holland, Pa.) fired 9.0 scoreless innings for a new career record, moving to a 4.09 ERA and a 3-6 record with the win. Welsh allowed just five hits and walked only one while striking out two. Read more at MSUspartans.com | Read more at GoPSUsports.com.

INDIANA 7, OHIO STATE 2: After taking a 2-0 lead into the ninth inning, the Ohio State baseball team dropped a 7-2 decision to No. 21 Indiana Friday evening at Nick Swisher Field at Bill Davis Stadium. With the loss the Buckeyes fall to 34-20, 15-8 in Big Ten play, while the Hoosiers move to 39-13 and earn at least a share of the Big Ten title with a 16-7 record. Read more at IUHoosiers.com | Read more at OhioStateBuckeyes.com

WICHITA STATE 5, NORTHWESTERN 0: Northwestern starting pitcher Brandon Magallones was sharp on the mound for seven innings, but the Wildcats offense was handcuffed by Wichita State Friday night in a 5-0 loss at Eck Stadium in Wichita, Kan. Read more at NUsports.com

NEBRASKA 9, MICHIGAN 6: Michigan fell 9-6 at Nebraska Friday night  in front of 5,503 fans at Haymarket Park. Michigan took a 2-0 lead early, but Nebraska scored nine straight, including a five-run second inning. With one game remaining in the regular season, Michigan is in sixth place with a 13-10 conference record. U-M clinches a Big Ten Tournament berth with either a win on Saturday against Nebraska or a Michigan State loss at Penn State. U-M can get as high as the fifth seed in the tournament with a win and a Minnesota loss to Illinois.  Read more at MGoBlue.com | Read more at Huskers.com