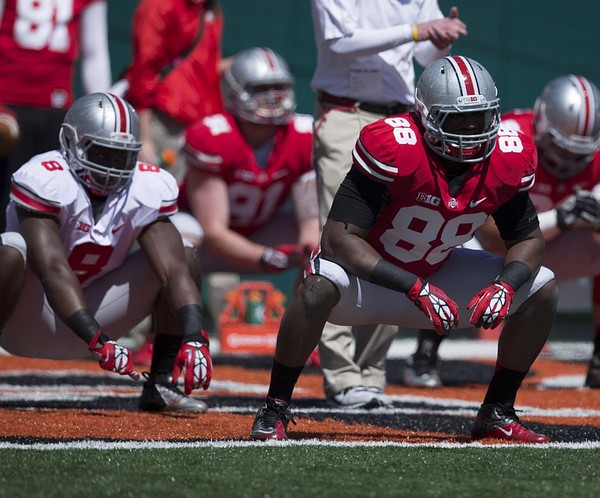 Some think Ohio State is the best team not just in the Big Ten but perhaps the best team in the nation as it comes off a 12-0 debut under Urban Meyer. A wealth of talent is one reason for optimism, as the Buckeyes are NCAA probation-free and eligible to win the Big Ten and BCS crowns. A favorable schedule is another reason for optimism. Ohio State should be favored in every game but one in 2013: the season finale at Michigan on Nov. 30.

Ohio State also avoids games with Nebraska and Michigan State, which is nice for the Buckeyes. I look at the Buckeyes in my latest Big Ten 2013 Schedule Analysis post.

Toughest non-conference game: Going to Cal will be tricky. The Golden Bears almost won in Columbus last season, as the Buckeyes didn?t score the game-winning touchdown until less than four minutes remained in a 35-28 victory. And the Bears have a new dynamic coach in Sonny Dykes, whose high-flying offense may pose issues.

Toughest conference game: It?s the visit to Michigan on Nov. 30. This could be a preview of the Big Ten championship game-and it?s the last chance for that possibility, with the schools moving into the same division in 2014. Ohio State has dominated this series of late, winning eight of the last nine meetings. Michigan did win the last time the game was in Ann Arbor in 2011. OSU may have to win ?The Game? to keep its national title dreams alive. You know the Wolverines would relish trashing the Buckeyes? title dreams. They have done it before.

Who they don?t play: The Buckeyes get a big break here, not having to play Michigan State, Minnesota and Nebraska. The Cornhuskers may be the top team in the Legends. The Spartans always are a tough out, and the Golden Gophers are improving. Ohio State picks up Iowa and Northwestern, which has its best team in ? forever.

Easiest game: Florida A&M won?t know what hit it when the Rattlers visit Ohio State on Sept. 21. Why are the Buckeyes even playing a FCS team from the MEAC? These are the type of games that must be eliminated.

Rugged stretch: There is a formidable 1-2 punch to start the Big Ten season. First, there?s a visit from Wisconsin on Sept. 28. Next, there?s a visit to Northwestern. Get by that, and the Buckeyes should cruise all the way to the Michigan game on Nov. 30 in Ann Arbor.

Interesting factoid: Purdue has been a thorn in the side of the Buckeyes. Ohio State needed a miraculous rally to force overtime last year before taking a 29-22 decision in Columbus. In all, these two teams have split the last four meetings. The teams meet on Nov. 2 in West Lafayette, where Ohio State has lost the last two times it has visited. And you can bet new Boilermakers coach Darrell Hazell-a longtime Ohio State assistant-would love to dump the Buckeyes.

Best chance to pull an upset: The Buckeyes figure to be an underdog maybe one time this season: at Michigan on Nov. 30. And, the Wolverines also may be ultra-motivated to win if it would mean ending Ohio State?s unbeaten season while also enhancing Michigan?s chances to win the Legends Division. On top of all of that, this is one of America?s iconic rivalries. Anything can happen, right?

Best chance to be upset: Ohio State will be the hunted all season, which can be an exhausting proposition. The Buckeyes will get every team?s best shot. And they need to be on guard on Oct. 5 when they travel for a prime-time game to Northwestern, which has its best team in years. Complicating the task is the fact Ohio State plays Wisconsin the week before heading to Evanston. The Buckeyes have bullied Northwestern for generations. Since losing to NU in consecutive seasons in 1962-63, the Buckeyes have gone 33-2 vs.  the Wildcats. The losses have come in 1971 and 2004, when the Wildcats took a 33-27 decision in Evanston.

Must win: Ohio State needs to take care of business when Wisconsin visits Columbus for the Big Ten opener on Sept. 28 in a battle between the two best teams in the Leaders Division. Led by first-year coach Gary Andersen, the Badgers look to have one of the Big Ten?s top defenses-and they will be operating with a new aggressive 3-4 scheme that Ohio State never has seen before. But the Buckeyes have won five of the last six meetings. And Wisconsin hasn?t won in Columbus since 2004.

Bye weeks: These come pretty close together. The first bye comes on Oct. 12 after six games. Ohio State may need the break after back-to-back games vs. Wisconsin and at Northwestern. The second bye comes just four weeks later on Nov. 9. The Buckeyes have just three games after that-at Illinois, vs. Indiana, at Michigan.