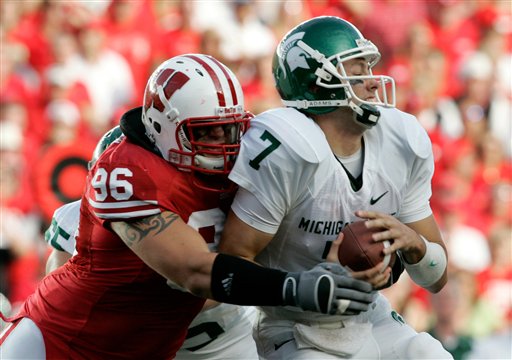 The Big Ten released its 2014 Big Ten conference schedule on Thursday, incorporating Rutgers and Maryland into the family. There were some interesting scheduling quirks.

So, let?s start daily links right there with some reactions from across the league from the reporters who cover it.

Michigan: The Wolverines will play at Michigan State in back-to-back seasons (2013-14) for the first time ever. And the Wolverines also play at Ohio State in 2014.

Nebraska: The absence of Michigan, Ohio State and Penn State - which have combined for four national titles and half of the Big Ten's Rose Bowl appearances in the past 30 years - will be a change from the Cornhuskers? first two years in the league, when all three appeared on the slate. But as Dirk Chatelain of the Omaha World-Herald points out, the Huskers schedule isn?t that easy. And, if it wants to toughen up things, beef up the non-con schedule.

Michigan State: Buy season tickets with the likes of Michigan, Ohio State and Nebraska coming to East Lansing in 2014. But, unfortunately, the schedule flips in 2015. Ugh.

Here is a look at quirks of the 2014 Big Ten schedule with photos and captions. Pretty neat. Thanks, HawkCentral.com!

Worth noting: Newbies Rutgers and Maryland appeared to get treatment similar to what Nebraska received upon joining the Big Ten in 2011. The Scarlet Knights cross-division foes in 2014 are Nebraska and Wisconsin; Maryland got Iowa and Wisconsin. Rutgers will take on seven foes that had a 36-20 combined league record in 2012.

Players have until the start of the 2013 season on August 31 to still transfer and be immediately eligible. Ten players bolted before the start of last season.

John Beilein has a good idea here: All transfers should have to sit out a year, regardless of their situation.

It seems mid-major schools get raided by schools from power conferences, which seem to swoop in and take fifth-year seniors who are then immediately eligible. Instead, make them sit out if they wanna switch, just like other transfers have to do. That?ll put an end to the talent drain on the ?little guy.?

Count Kansas? Jeff Withey among those who is surprised Michigan?s Mitch McGary didn?t turn pro. The duo battled in the Sweet 16 last season. Withey no doubt was impressed like all of us.

?He?s a great hustle player, a great energy guy and he?s going to do really well next year,? Withey said at the NBA Combine. ?I?m surprised that he didn?t go to the NBA. What surprised me is he?s a smaller guy but he plays bigger than what he is.?

Here is some video from the Chicago Tribune of Illinois? Brandon Paul talking about making the jump to the NBA.

My take: Yes, but the sellout streak will continue.

Here's a question: To create a tougher schedule in 2014, does Nebraska consider dropping McNeese State and picking up a better opponent?

My take: Good to see Michigan will deal with-and not whine-about going to Michigan State in consecutive years. Other schools have had similar situations recently.

My take: Kid is gonna be a great pro.

My take: Mbakwe is correct about Michigan. I, too, was a bit surprised that McGary didn?t bolt. But, I?m glad he stayed-for at least one more year.

Burke hasn't bought a car yet but test drove a BMW 750 and a Porsche. Said he'll buy after the draft.

My take: So, Trey Burke isn?t looking at a Toyota Prius or Ford Focus? I am shocked.

Michigan will play its 3 biggest rivals — Ohio St, Michigan St, Notre Dame — all on the road in 2014. Tough break there.

My take: A weird schedule for Ohio State.

My take: It?s good to be the Badgers.

My take: Can you say ?fast start?? Sure you can!

Land Grant Trophy is back on the line. Winner gets to make the other team take it with them.

My take: There is no uglier trophy in the Big Ten. Am I right?

2014 marks 1st time since 1951 #Purdue plays at Notre Dame and at Indiana in same season. Not what AD Burke wanted to see

My take: This is bizarre.