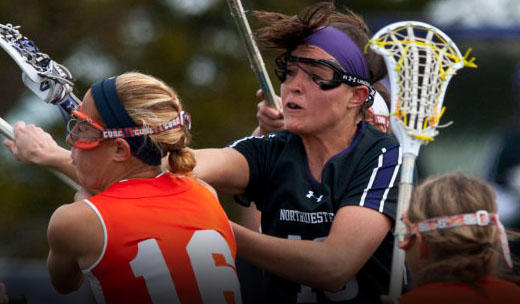 BTN will televise the NCAA women's lacrosse tournament quarterfinal matchup between No. 2 Northwestern and No. 7 Penn State live at 8 p.m. ET on Saturday. The telecast will be simulcast on BTN2Go. Mike Wolf and Ashley Gersuk will have the call from Lakeside Field in Evanston.

The two-time defending NCAA champion Wildcats are in the hunt for their eighth title in the last nine seasons. In its second-round match on Sunday, Northwestern defeated Stanford 15-8 to advance. Senior Taylor Thornton and junior Alyssa Leonard each finished with three goals and an assist to pace the Wildcats. Penn State advanced to the quarterfinals by beating Massachusetts 12-9. Junior Mackenzie Cyr and sophomore Maggie McCormick each turned in six point efforts for the Nittany Lions. The winner of Saturday's game will advance to the semifinals to take on the winner of No. 3 North Carolina and Virginia.

Follow the game with live stats online via the NCAA.com interactive bracket.

Here's a little more on BTN2Go, BTN's live 24/7 multi-platform extension of BTN where fans can watch the TV network live wherever they are via the internet, mobile phone or tablet. Cable and satellite companies who have agreed to carry BTN2Go will offer it, but you must have BTN as part of your cable or satellite subscription to get it.

We also now offer BTN2Go for iPhone and iPad via the iTunes store as well as for Android phones via the Google store. To learn more and to use BTN2Go, go to BTN2Go.com.