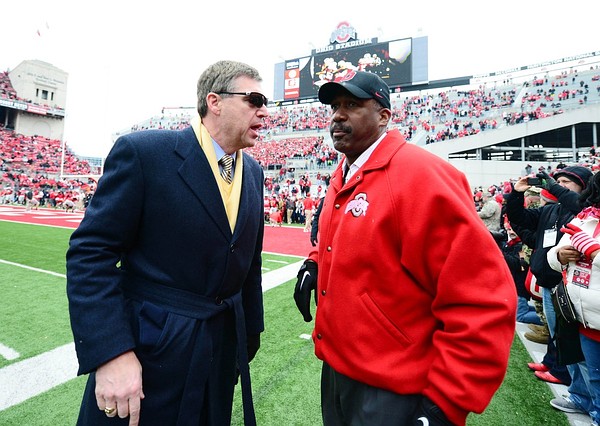 The cry for November night games seems to be gaining steam. Oh, they are coming. Could the sacrosanct Michigan-Ohio State ever be played at night? Buckeye athletic director Gene Smith is against it. Me, too. But, heck, I?m against all night games. "It'll be noon," Smith told reporters at the recent Big Ten meetings. "I have to be open to 3:30, but noon is my favorite time for that one."

So, bottom line: Don?t expect the Michigan-Ohio State game to start any later than 3:30 p.m. ET-until, of course, the money becomes so great that they move it to 8 p.m. ET and everyone says it?s a ?great idea.?

Tradition has no chance vs. money. Nothing does.

When the 2014 Big Ten football schedule is released-expected to be today-look for parity-based scheduling for cross-division games. Read on.

"If you look at cycles, where one team sits in one decade, they may not sit in the next decade," Joyner said. ?You have to be careful thinking this is an all and forever thing

"You continue to try to adjust. You try to make it interesting for the fans."

"The proximity, a three-hour drive to Iowa City for our fans and their fans, was very convenient," he said. ?Even Northwestern, more so than Michigan State; and I think about our fans first.

"It's all about proximity. How easy it is for someone to drive, or to get to a location, is more important."

Alvarez is spot-on. Besides, just because Wisconsin and Michigan State have had some good games for three or so years doesn?t mean the schools now have an iconic rivalry that must happen annually.

Still, as Dennis Dodd of CBSSports.com points out, why was Michigan dropped instead of, say, Purdue or Michigan State from the Big Ten? I think we know why. But, forget it. Let?s move on.

Michigan State was one of the Big Ten?s most disappointing teams in 2012, going 7-6 after consecutive 11-win seasons. But Spartan A.D. Mark Hollis says he still sees progress.

MSU should bounce back in 2013-if the offense can answer some big questions. Still, I think Nebraska, Michigan and Northwestern all will finish ahead of the Spartans in the Legends Division.

??Need? or ?want? is the choice,? Hollis said at the recent Big Ten meetings. ?We want to have the Irish in our future because of the rivalry. It kind of comes down to, as you go through the pecking order, the Big Ten conference is No. 1 … no matter what opponent that is within the league. … I think the Notre Dame game is a cool, hip game that builds off tradition. That?s one that will be important to continue. I think we want them. I?m not sure, if you want to use the term, we ?need? them.?

Again, as I said before, the Big Ten should just divorce itself from all Notre Dame games. Hey, if Nebraska-Oklahoma and Texas-Texas A&M can end, I think Michigan State-Notre Dame can end.

Count Big Ten A.Ds and commissioner Jim Delany among those who would like to see teams have to go 7-5 to qualify for a bowl. But they realize that standard won?t be adopted nationally. So, 6-6 will remain the bar to play in the postseason. It?s drab, average teams like that which diminish a bowl system that already is pretty much insignificant-save for a handful of the games. Does the world really need, say, 6-6 Western Kentucky playing 6-6 UTEP in the New Orleans Bowl on a Tuesday in mid-December? What is the point?

According to ESPN.com?s Dave Telep, Kentucky's eight-man class ranks like this:

Kentucky's class is three members larger than Michigan's crop in 1991. Immortal Bob Gibbons ranked the Fab Five like this.

I love this debate. But I am even more excited to see these Kentucky freshmen next season.

It?s too bad Purdue and Indiana will play just once next season.

?Our schedule is set and we?re not going back on any contracts,? Purdue athletic director Morgan Burke said Wednesday during the final day of the Big Ten spring meetings. ?Unless something out of the sky happens, we?ll likely play one time next year.?

But don?t you think if Purdue REALLY wanted this to happen, it could make it happen?

It wasn?t long ago when Indiana was oversigned by three players. Well, zing, bang, boom ? the Hoosiers are at the limit of 13 players with the addition of Arizona State transfer Evan Gordon, younger brother of Hoosiers one-and-done icon Eric Gordon.

Terry Hutchens of the Indianapolis Star notes that this upcoming season, Indiana will have a team that will have more newcomers (seven) than returning players. Still, I think IU will begin 2013-14 ranked 20-25 in the polls. There are some studs coming to Bloomington.

Indiana got a fifth-year senior transfer; so did Purdue, landing Cornell?s Errick Peck.

And, like Indiana, Purdue will have a young team next season. Check it out: With the exceptions of Peck, senior-to-be guard Terone Johnson and senior-to-be post player Travis Carroll, every other scholarship player for the Boilermakers will have freshman or sophomore eligibility. Peck?s experience and leadership will help this youthful roster.

Why is the B1G so bad in football right now? ADs seem to think 2 biggest issues are coaching instability and lackluster assistant pay.

My take: Something to be said about both. On the later item, know this: You usually get what you pay for.

Big10 has been out of Holiday Bowl (San Diego) since '94. Would be great addition to future rotation. BYU over Mich. in '84 was signature gm

My take: A great event. One of the best non-BCS bowls, along with the Alamo. In fact, I think the Alamo Bowl is the best bowl that won?t be part of a coming playoff. Too bad.

My take: Just another ?normal? day at Penn State.

If I had to sum up Bill O'Brien's conference call with reporters late Wed. afternoon in two words, those two words would be: controlled fury

My take: No doubt, Bill O?Brien?s response to the SI story has been swift and forceful.

My take: What took so long?

Example of why #Huskers fans should count blessings: Rutgers has forked out $28 million in subsidies to its athletic department. Yikes.

My take: That just isn?t right. Athletic departments shouldn?t be allowed to take that much money. It will be interesting to see where Rutgers? finances are in, say, 5-10 years.

My take: It?s good to have options.

Don't be surprised if #Purdue isn't done adding to next year's roster. No timetable on when it might happen though.

My take: This could be interesting. I wonder who else may be coming? Next year is a big season for Matt Painter. He needs to fill up Mackey Arena and win a lot of games.