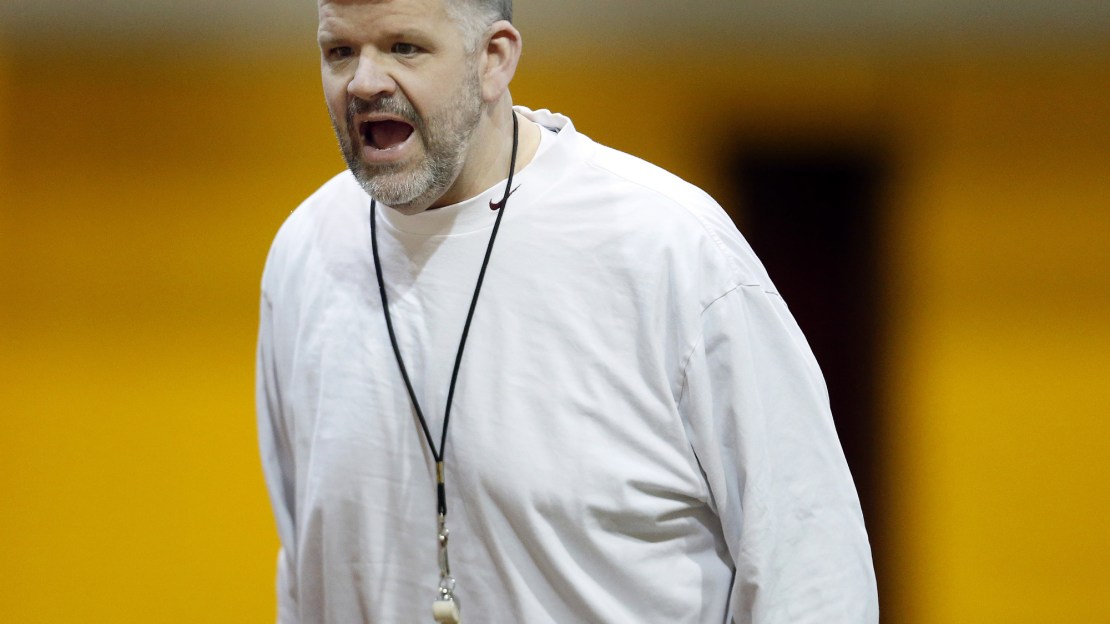 It?s a slow, steady process, but the Minnesota offense is coming on as Jerry Kill continues to put his mark on the program entering his third year in the Twin Cities. Offensive coordinator and offensive line coach Matt Limegrover?s attack ranked 10th in the Big Ten in 2012 (321.4 ypg). And the offense was ninth in scoring (22.1 ppg).

Despite those numbers, the Golden Gophers played in a bowl game for the first time since 2009. Injuries-particularly along the line-hampered the Minnesota offense in 2012. But the offense looks primed to take the next step with improved depth and knowledge. I talked to Limegrover to get his views of the offense coming out of spring football.

Q: Were you pleased with how the offense left spring football?
A: Yes. We made a lot of positive headway. As I have told people, it?s just a continuation of what we started in bowl prep. We really tried and understood that the bowl prep was needed and important. We incorporated a lot of the young kids. We basically split our practices in two, spending the first half getting ready for Texas Tech and the second half trying to get the young guys up to speed. I think that helped us. It has been well-documented that our lack of depth has really hurt us the last few years, especially last year. To be able to go into the spring with more guys who were in tune with the offense, I think it really raised the level of what we were able to get done.

Q: How is the line coming along?
A: The two things we were most pleased about coming out of the spring were No. 1, our quarterback play came on. Philip Nelson continued to progress. A big reason for that was Mitch Leidner started to push him and we have some young guys, too. We have great competition and feel comfortable with both of those guys.

The other part we were pleased with was the line. We were forced to use a lot of offensive linemen last year. And that has helped us develop depth. I don?t know if any of those guys are necessarily first-team All-Big Ten guys, but I feel a lot more comfortable with the first nine or 10 guys I have going into fall camp. I only felt comfortable with six of them last year. We had injuries and had to use guys we really didn?t know a whole lot about last year.

A lot of these guys have gone through the battles now. We didn?t have Eddie Olson and his experience out there as he recovered from ankle surgery in the spring it didn?t affect us as much. We were able to get more guys more reps and the younger guys were able to step up. I feel very comfortable with anyone in our top 10 now. What I did in the spring was try to develop some versatility by having guys move around. Everyone is on notice.  I am gonna play the best five. But they will determine who that is.

Q: Do you have enough big-play ability?
A: I think we are getting there. With the way we are built, I think there will be more big plays percentage-wise with our running backs because we are getting better up front. I have felt bad for our running backs the last couple of years. Anything they got they have had to earn on their own. The one thing that always impressed me about Montee Ball at Wisconsin is when he had his big plays, he wasn?t getting hit until he was in the third level (of the defense). We haven?t been able to do that a whole lot. But I think up front, we are getting to that point, but I?m not saying we have Wisconsin?s line from 2011. But I think we are getting to where those guys will have more opportunities to create more plays at running back.

I think the receiver spots are still wide open. That?s where we need to create more big-play possibilities in some guys. We are trying to see who wants to step up and take that initiative.  We have had some guys show some flashes.

Q: Could Jamel Harbison be one of those guys as he comes back from injury? He was showing some flashes early last season.
A: He came back and had a good spring and started to show that again. I don?t think our trainers thought he would be doing more than individual drills, 7 on 7. By the end of spring ball, he was live and going after it. I think he still was a bit slow and rusty, but the summer will help get him back to top form. We are excited for him.

The other guy is Derrick Engel. If you see him in the hallway, you think he?s a student manager. He?s so unassuming from a physical standpoint. But he finds a way to get open and make plays. He has a knack for making plays and being in the right spot. Him and Philip are developing a good rapport.

Q: As you enter your third season running the program, will the offense do more and dig deeper into the playbook?
A: Eventually. Last year, we were struggling to find plays that would give us five yards. We weren?t able to build like we wanted to. Going into the spring, we settled down. The quarterbacks are the ones who will allow us to open things up. Philip has really taken a step forward. But at the same time, just because you have a lot of stuff doesn?t mean you?ll be good at a lot of stuff. We don?t wanna rush that. We want to make sure our quarterbacks are good at doing ?A? before we jump to ?B.? We have some things we?d like to do with our quarterbacks, Philip in particular.

But if we get too far ahead of ourselves and aren?t very good at the foundation stuff, all the other stuff won?t mean much. That was the focus in the spring and will be going into the season. We will add as we go. We are chomping at the bit to expand, but we tried to do that too much when we first got here. We don?t want to make that mistake again. We need a good foundation.