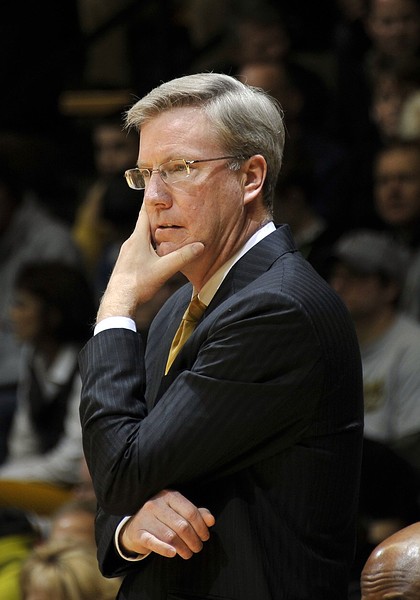 The Big Ten basketball coaches are meeting as we speak. Among the topics: Should divisions be used for basketball?

It probably won?t happen. At least if you listen to Iowa coach Fran McCaffery. ?I don?t think divisional play is where we?re headed,? McCaffery told the Cedar Rapids Gazette. ?I guess we could talk about it (Tuesday). It really wasn?t on the agenda.?

The coaches have discussed future scheduling. In 2014-15, Rutgers and Maryland will join the Big Ten to give the league 14 members. It?s likely the Big Ten schedule will stay at 18 games: play five teams twice and eight teams once.

?That model hasn?t been decided yet,? McCaffery said. ?Who do you play twice, who do you play once, and how does it rotate on a year-by-year basis? We did talk about that, but there was nothing decided.

?We?re definitely trying to protect rivalries and make sure that you?re going to continue to play those teams.?

These words actually were typed in this story: ?(Hardaway) sacrificed a starring role, gave up shots and deferred to Burke — who became a superstar and the consensus national player of the year.?

Sorta like saying Steve Kerr sacrificed being a superstar so Michael Jordan could take all the shots back in the 1990s. Preposterous. Hardaway is nowhere NEAR the player Burke is. To suggest Hardaway sacrificed/deferred to Burke is laughable. Hardaway isn?t a guy you build a team around. He?s a complementary player.

It?s safe to say that Michigan?s Brady Hoke isn?t happy about the end of the Notre Dame series, as last year the Irish opted to cancel games with the Wolverines from 2015-17. The series was gonna take a break from 2018-19. So, for the time being, this iconic rivalry will end after 2014.

"The Notre Dame game, that rivalry, which they're chickening out of," Hoke said Monday during the West Michigan Sports Commission Annual Luncheon at the J.W. Marriott in Grand Rapids.

Here?s video of Hoke at the event.

"(Notre Dame is) still gonna play Michigan State, they're gonna play Purdue, but they don't want to play Michigan. I don't know how they made that decision … I really do … But anyway, that's a great national rivalry game. It's a great game."

Nobody stokes a fire better than Hoke. Thanks, Brady!

Like every other coach in the Big Ten, Nebraska?s Bo Pelini is chasing Ohio State?s Urban Meyer and Michigan?s Brady Hoke when it comes to recruiting.

From 2007-13, no Big Ten teams other than OSU and UM cracked the top 10 of the Rivals.com recruiting rankings. Steve Sipple talked to a recruiting analyst about Nebraska?s biggest hurdle.

"The toughest thing they've had to do is switch recruiting territories," Rivals.com?s Josh Helmholdt said of the move from the Big 12 to the Big Ten. "I don't think people realize how difficult that is. The kids in Ohio, Indiana, Chicago, Michigan — a lot of those kids didn't grow up watching Nebraska football."

It?s gonna be a tough for Big Ten teams to keep pace with Ohio State and Michigan. But the league will benefit from trying to do so.

Yes, the Wolverines are that desperate for a backup to Devin Gardner. Mark Snyder of the Detroit Free Press says adding a veteran quarterback is important because redshirt sophomore Russell Bellomy tore his ACL in spring practice. U-M is left with one on-scholarship backup quarterback for the fall - true freshman Shane Morris - and two walk-ons, Brian Cleary and Alex Swieca, who took many spring snaps.

Another projection for Penn State in 2013: How does a 9-3 record sound? Pretty good, huh? That?s the record Football Outsiders thinks the Nittany Lions will have this fall.

I don?t know if I agree with that.

More Penn State: The great Bob Flounders of the Harrisburg Patriot News has some PSU Numerology.

One number is ?3,? which is the number of schools ex-Penn State quarterback Steven Bench is visiting after announcing he was transferring. The schools: N.C. State, Mississippi State and South Florida. Good luck, kid. Find an offense that fits your athletic skills.

Andersen talks about some interesting stuff, like how he wants to emulate the 49ers offense (who doesn?t?!). And Andersen doesn?t seem to think it?s a done deal that Joel Stave will be the starting quarterback. Well, we shall see. I think in the end, Stave will be the guy. But I wanna see JC transfer Tanner McEvoy.

MLive.com recently conducted a poll asking Michigan and Michigan State fans to select the player from their teams - each other?s, or their own - that they would pick first if they had the option. The winner: Gary Harris. No shock to me. I?d take him over any Wolverine.

How about Wisconsin vs. St. John?s in Sioux Falls, S.D.? It's happening. In hoops.

The great Mike Hlas of the Cedar Rapids Gazette says Rutgers hasn?t exactly been on a roll since it was announced it would be joining the Big Ten.

I am stunned the school will let new hoops coach Eddie Jordan remain after it was revealed he never graduated from the school. What?s he gonna tell recruits about the value of getting a degree when he doesn?t even have one? Bizarre.

In story I did on college FB assistants' salary inflation, was struck as much by length of some pacts compared to OSU max of 2 yrs as the $$

My take: That will be the next step for Big Ten assistant coaches: contracts that run 3-5 years. Oh, they are coming. Trust me.

One thing I missed from Hoke earlier: He said Toussaint (leg) is really "tearing it up." Sounds like he's going to be good to go this fall.

My take: This is good news. No doubt, Michigan needs his presence in a much-maligned backfield. But I can?t wait to see freshman Derrick Green. Kid is supposed to be a stud.