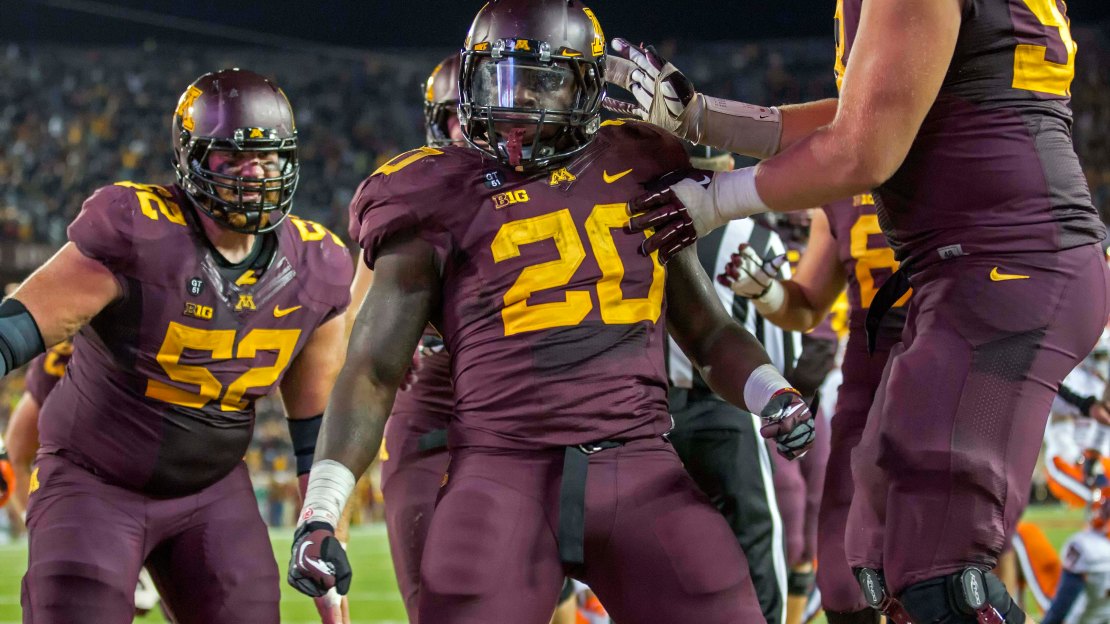 This schedule is built for success – at least the first half of it. It opens with four of the first five games coming at home. And Minnesota should be favored in each one. Could the Golden Gophers be 5-0 when they travel to Michigan on Oct. 5? Hmm. And-don?t look now-but Minnesota has a good chance to be 5-3 when it plays at Indiana on Nov. 2. But a loss to the improving Hoosiers would make getting a sixth win very difficult with a challenging last few games.

Toughest non-conference game: This is a non-con schedule Kansas State coach Bill Snyder can appreciate. There are  four punching bags lined up with three being played in the friendly confines of TCF Bank Stadium: UNLV; Western Illinois; San Jose State. The lone road game is at New Mexico State. But let?s go with San Jose State?s visit on Sept. 21 as being the ?toughest.? The Spartans went 11-2 last season but have a new coach.

Toughest conference game: Hide the women and children: The battle for the Little Brown Jug at Michigan on Oct. 5 will be daunting. The Wolverines have dominated this series, losing just three times (1977, 1986 and 2005) since 1968, going 38-3 over that span.

Who they don?t play: The Golden Gophers miss Ohio State, Purdue and Illinois. Minnesota catches a break not having to play the Buckeyes, the likely Big Ten favorite. Since a win over OSU in 1966, Minnesota has just two victories vs. the Buckeyes-in 1981 and 2000. That?s a 2-36 record. But the Gophers, no doubt, would have liked shots at the Boilermakers and Fighting Illini, two teams Minnesota dumped last season.

Easiest game: Without a doubt, it?s the visit from FCS Western Illinois on Sept. 14. The Leathernecks went 3-8 last season-1-7 in the MVC. Jerry Kill may be able to empty his bench.

Rugged stretch: There is a lot of heavy lifting the last three games of the season, when the Gophers may be playing for a second consecutive bowl bid. On Nov. 9, Minnesota plays host to Penn State. After a bye week, the Gophers finish with a visit from Wisconsin and a trip to Michigan State.

Interesting factoid: Here are two–Minnesota has lost nine in a row to Wisconsin and is just 4-18 vs. the Badgers since 1991 in the battle for Paul Bunyan?s Axe. Nebraska has beaten the Golden Gophers 16 times in a row. The last Gophers? win? A 26-14 decision in 1960.

Best chance to be upset: It could come in the opener on a Thursday night at home vs. UNLV if Minnesota isn?t ready. The only other meeting was last season in Las Vegas, with the Gophers escaping with a 30-27 victory in triple overtime. Bobby Hauck has an improving club. And he may need a big season to keep his job.

Best chance to pull an upset: If injuries have wracked a Penn State squad playing with just 65 scholarship players when it arrives in Minneapolis on Nov. 9, Minnesota may have a good shot at victory. The Golden Gophers have lost the last four meetings with the Nittany Lions after winning four in succession in the series. The teams haven?t met since 2010.

Must win: If the Golden Gophers want to get back to a bowl, they probably need to open Big Ten play on Sept. 28 with a home win vs. Iowa, which is coming off its worst season since 2000. Iowa won last year?s meeting in Iowa City, 31-13, and has won four of last six in the battle for Floyd of Rosedale. But the Gophers won the two previous meetings prior to 2012 and have won three of the last four in Minneapolis.

Bye weeks: The spacing is good. The first bye comes on Oct. 12 after Minnesota has played six games. And it falls between trips to Michigan and Northwestern. The second bye comes five weeks later on Nov. 16, allowing Minnesota to regroup for two tough final games: vs. Wisconsin and at Michigan State. The bye also comes between a visit from Penn State and visit from Wisconsin.