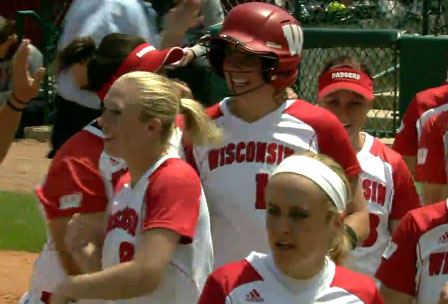 A quartet of Big Ten softball teams were selected to the NCAA tourney, it was announced late Sunday night. Big Ten regular-season champ Michigan earned the No. 8 national seed and Nebraska the No. 14, while Minnesota and Big Ten tourney champ Wisconsin also made the field.

The 64-team tourney is divided into 16, four-team double elimination regionals, which begin Thursday. The 16 regional winners advance to super regionals, where eight will emerge as Women?s College World Series participants.

MICHIGAN
The No. 6-ranked University of Michigan softball team will enter play in the NCAA Tournament as the No. 8 seed and will host a regional weekend in Ann Arbor at the Wilpon Complex, home of Alumni Field. Michigan will open play on Friday against Valparaiso at 7 p.m. The two other teams in the Ann Arbor regional, California and Central Michigan, will play earlier on Friday. Read full MGoBlue.com story.

MINNESOTA
The University of Minnesota softball team has qualified for its first NCAA Regional appearance since 2003, as it learned on Sunday night that it will travel to Seattle, Wash., for the Washington Regional, which begins on Friday. The Gophers will face Hawai'i (43-11) on Friday, with host No. 11 Washington (38-15) playing Portland State (25-29) in the other game. Read full GopherSports.com story.

NEBRASKA
The Nebraska softball team was selected as an NCAA Regional host after earning the No. 14 national seed when the NCAA Tournament field was announced live on ESPNU Sunday night. The Huskers will welcome Stanford, Tulsa and Northern Iowa to Lincoln for the NCAA Lincoln Regional on Friday, Saturday and Sunday at Bowlin Stadium. Read full Huskers.com story.

WISCONSIN
Wisconsin, the 2013 Big Ten tournament champion, has been selected to the NCAA regional in Oregon to be held May 16-18. The Badgers will open regional play against North Carolina at 5 p.m. CT on Thursday. Regional host third-seeded Oregon (46-9) will play BYU (33-20) in the second game on Thursday. Read full UWBadgers.com story.