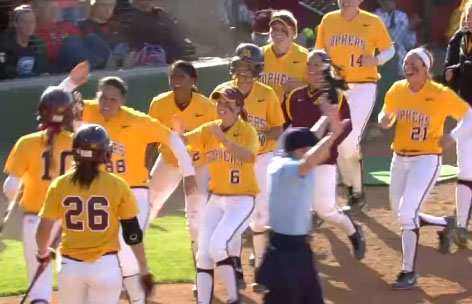 No. 4 Wisconsin upset No. 1 Michigan, 9-3, and No. 3 Minnesota blanked No. 2 Nebraska, 1-0, in the Big Ten tournament semifinals Saturday in Lincoln. Neb. The Badgers and Gophers meet in the championship game at 1 p.m. ET Sunday on BTN/BTN2Go.

MINNESOTA 1, NEBRASKA 0: Junior Sara Moulton threw her second complete game shutout in as many days, and Kari Dorle's one-out line drive single off the wall in left center drove in the game's lone run in the bottom of the sixth, as Minnesota advanced to the Big Ten Tournament title game with a 1-0 win against Nebraska at Bowlin Stadium. Read full GopherSports.com recap.

WISCONSIN 9, MICHIGAN 3: Playing like it had nothing to lose, Wisconsin defeated No. 6 Michigan, 9-3, to advance to the Big Ten tourney title game for the first time in program history. Wisconsin (41-11) scored six runs in the first inning, highlighted by Stefanni LaJeunesse's pinch-hit grand slam, to knock off the No. 1-seeded Wolverines (45-10) and card its first win over a top-10 opponent since 2002. Read full UWBadgers.com recap.

Whitney Massey boots it but gets runner at plate: