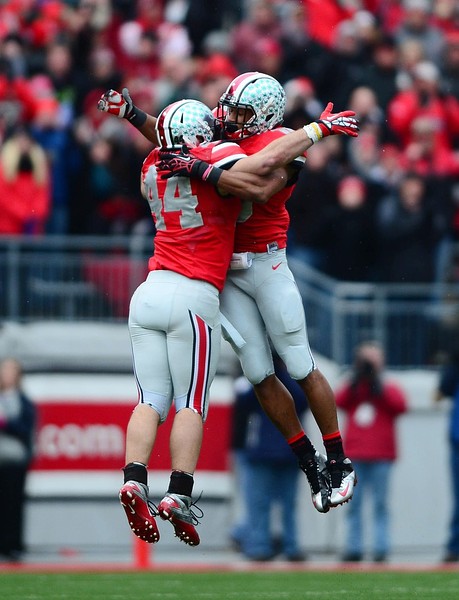 Except for the guy living under a rock-you know who you are-we all have heard 1,000,001 times that the SEC has won the last seven national titles. Bravo! It is an awesome feat. If a Big Ten team is gonna end the skein, it figures to be Ohio State, says Stewart Mandel of SI.com as I present Friday's edition of my weekday Big Ten links.

No doubt, the Buckeyes are the Big Ten team best-equipped to do it. Ohio State is coming off a 12-0 debut under Urban Meyer. The offense should be top-shelf, as long as some big-play wideouts emerge. The defense has to overhaul its front seven, but I think it will be better than last year?s front seven.

Check out some of these quotes:

"I hear about it all the time from my cousin — SEC this, SEC that," said LB Ryan Shazier. "There's one reason I came to Ohio State — to beat up on the SEC."

"The SEC has won, what, seven [BCS titles] in a row?" said CB Bradley Roby. "What better than for Ohio State to be the team that ends it? That's what we're looking to do this year."

This is beautiful stuff.

The great Bob Flounders of the Harrisburg Patriot-News has five questions for Penn State fans to consider as the team prepares to go on summer break.

One question: Which veterans need to step up? Flounders says one is massive DT DaQuan Jones. And what does Bill O?Brien mean when he says Tyler Ferguson is ?a little bit ahead? of Christian Hackenberg in the quarterback competition?

That?s only because mega recruit Christian Hackenberg hasn?t taken a snap on campus. Once that happens, he?ll be ahead. Trust me.

The love affair between former Iowa quarterback Brad Banks and Hawkeye fans burns on. And rightly so. He soon will be inducted into the school?s Hall of Fame. Not bad for a guy who started just 13 games. But no one will forget that magical 2002 season.

Pat Harty of HawkCentral.com notes that some Iowa fans still are upset that Banks didn?t play more as a junior in 2001 while serving as the backup to senior Kyle McCann. They assume with all his success in 2002 that Banks would?ve been better than McCann and they blame Iowa coach Kirk Ferentz for being too loyal to McCann.

Penn State?s caravan is winding down. If you weren?t able to attend one of the many stops along the way, check out this video of a Bill O?Brien speech at the Penn State DuBois Campus. Thanks, FightOnState.com!

The guy can be funny at times.

More video: This time, it?s Wisconsin coach Gary Andersen on the Tim Brando Show. Brando is the embodiment of college sports. Am I right, people? Of course I am. Love the guy. He?s an icon.

The gang at Athlon debated who should start at quarterback for Wisconsin.

My choice? I wanna see this hot-shot incoming JC transfer Tanner McEvoy, who began his career at South Carolina. He?s supposed to be a stud but hasn?t arrived on campus yet. Of the quarterbacks I have seen, I would go with Joel Stave. He looked solid last season and is BY FAR the best passing option of the returning signal-callers who also started games last season: Danny O?Brien and Curt Phillips.

In case you missed this – and you probably did – ex-Gophers QB Max Shortell has transferred to Jacksonville State. The pro-style signal-caller wasn?t a good fit for Jerry Kill?s system. Plus, Philip Nelson and Mitch Leidner look good. Add it all up, and Shortell is gone.

Speaking of Minnesota, the Gophers will let the Vikings use TCF Bank Stadium in 2014-15 while their new NFL digs are built.

The bill for the Vikings: $300K per game-up to a maximum of $3 million per season. The Gophers will add as many as 4,730 temporary seats to 50,000-seat TCF Bank Stadium for Vikings games. And other improvement will be made. This is a nice deal for the University of Minnesota.

Invites to the NBA Combines are out-and Michigan?s Trey Burke and Tim Hardaway, Jr., will be there.

The two-day event will be held in Chicago starting on May 16.

ESPN.com's Chad Ford recently had Michigan?s Trey Burke going No. 5 overall to the New Orleans Pelicans in his latest mock draft. Tim Hardaway, presently, is viewed as a second-round pick by most.

Here?s a look at the full list of invitees to the NBA Combine. Several other Big Ten players will be there. You know the names.

The great Mike Hlas of the Cedar Rapids Gazette has another fun read here. This time, he asks readers to fill out the remaining six spots on Iowa?s hoops schedule.

Whatever happens, I think we can count on Iowa have a much more challenging non-conference schedule this season than last.

Illinois is conducting a barnstorming caravan. And John Groce senses there is a buzz around his program.

No doubt, it?s good to be Groce, who is coming off a strong debut that saw the Illini reach the Big Dance and win a game for just the third time since 2005. And his arena is about to undergo a renovation. If Illinois was a stock, it would have a ?buy? recommendation.

Deadspin has an interesting infographic: Is your state?s highest-paid employee a coach?

The lesson here: Have you son grow up to be a football coach-or basketball coach. Either will do, honestly.

Dave Brandon has said he would beef up future schedules, with the playoff expected to factor in schedule strength. Walking the walk now.

My take: Yes, this certainly qualifies as ?beefing up.?

In first two weeks of open period Bill O'Brien says his assistants are on track for 200 high schools visited.

My take: This wears me out just re-Tweeting it.

My take: Yep, you have to cast a wide net if you are Wisconsin. Smart move.

For years, #Northwestern fans kept believing the recruiting would catch up to the results. Finally, it's happened.

My take: No doubt, the Wildcats are off to a great start. Pat Fitzgerald has as much momentum as any coach in the league.